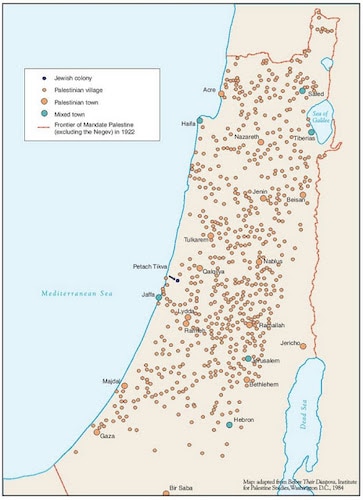 Palestine really was the Promised Land. So much so that it was promised to three different groups within a couple of years.(1) The promises were made by British imperialism, a real world power, not by an imaginary deity in a book of very dubious provenance. What made the promises remarkable was that they were about a land which, at the time, the British neither possessed nor controlled. But imperial arrogance was a commodity in ample supply when the promises were made, and it has not become scarce in the years since.

The most famous promise, the one most widely known, almost to the exclusion of the others, was to ‘the Jewish people’. Issued by the British Foreign Secretary, Arthur Balfour, in the Balfour Declaration of November 1917, it read:

“His Majesty’s government view with favour the establishment in Palestine of a national home for the Jewish people, and will use their best endeavours to facilitate the achievement of this object, it being clearly understood that nothing shall be done which may prejudice the civil and religious rights of existing non-Jewish communities in Palestine, or the rights and political status enjoyed by Jews in any other country.”

While something short of an outright promise, if a major imperialist power was willing to use its ‘best endeavours’ that was good enough for the Zionist lobbyists, after they had failed to make much ground with the Ottoman Empire or with Germany. In particular, they could ignore the annoying bit about not prejudicing the ‘civil and religious rights of existing non-Jewish communities in Palestine’ and be hopeful that their ethno-religious racism would eventually win the day. Neither were Zionist leaders very concerned about Jewish people being denied rights or status elsewhere as a result, since surely that would only add to the supply of the right kind of immigrant into Palestine.

Furthermore, it looked to them like a step up from British East Africa! After meeting with British Colonial Secretary Joseph Chamberlain in 1903, Theodor Herzl, the founder of modern political Zionism, had been offered an area of land in what was later Kenya as a refuge for those fleeing from pogroms in Eastern Europe. Herzl raised this option at the 1903 Zionist Congress in Basel, but, following protests from Russian Zionists and Herzl’s death in 1904, nothing further came of this so-called ‘Uganda’ Scheme.

Balfour’s brief letter should also be put in context. He already had form as having an ambiguous view on Jewish people. For example, while being opposed to Russian persecution of Jews, he was strongly in favour of the 1905 Aliens Act, Britain’s first immigration controls. The 1905 Act was focused on stopping Jewish refugees coming to Britain, and many British politicians, encouraged by Zionists, also came to see Palestine as a useful place to send the unwanted Jewish immigrants.

There were several other strands in the British political class that led up to the 1917 Declaration.

Some British politicians were Jewish themselves, and were worried that setting up a ‘Jewish homeland’ would raise questions about their British nationality. The final part of the Declaration about ‘Jews in any other country’ comes from this concern. Some were evangelical Christians who, while often also anti-Semitic, saw Jewish settlement in Palestine as part of God’s plan, and a step on the road to salvation, just as the British Empire was in its own divine manner bringing justice and order to the world. Some saw it as useful to have a grateful group of people loyal to Britain settling in what would be a strategic area as the Ottoman Empire was waiting to be carved up.

Many were also influenced by the anti-Semitic ideas of the time, in particular the notion that Jewish financiers had immense power and influence. So the Declaration might be a sensible policy for gaining important friends. Naturally, the Zionist leaders discussing with British politicians talked up this ‘Jewish power’. To complete the factors leading up to the Declaration it is worth noting too that by 1917, with the First World War proving very costly in lives and treasure, British politicians cast an eye on the apparent influence of the Zionist lobby in America. They saw the Balfour Declaration as a way of gaining further American support.

But before getting carried away with the idea that a ‘national home’ for Jewish people in Palestine was an inescapable outcome, it is worth considering some other plans British imperialism had for the Promised Land. Two stand out and they were made before the much more famous Declaration. The first British proposal was implied by the correspondence in 1915-16 between the British High Commissioner in Cairo, Sir Henry McMahon, and Sharif Hussein, the Emir of Mecca.

It is important to realise that the background to this communication was the British attempt to get support from the Arabs for an attack on the Ottomans in the Middle East. In 1914, Turkey had taken the Central Powers’ side in the war, and the British were aware that there was some political opposition to Turkish rule in Arab areas of the Ottoman Empire that they might exploit.

As an incentive for this opposition, the British offered a kind of Arab independence over a vaguely defined region, with two caveats. One was that, as McMahon stated, ‘it is understood that the Arabs have decided to seek the advice and guidance of Great Britain only’ in the administration of such an area and they would also give Britain economic and commercial privileges over other powers. But perhaps the most important caveat was on the territorial region of Arab ‘independence’: it would exclude certain areas that the British might have to concede to the French, a British ally in the war that also looked forward to greater influence in the Middle East when the Ottoman Empire was carved up.

Quite which territory was excluded from the offer to the Arabs was not entirely clear. Sharif Hussein read in McMahon’s letters that these concerned an area of Syria west of Damascus. He rejected that, but continued the correspondence and the discussion of terms. Nevertheless, he did not think that Palestine or the important religious centre of Jerusalem were excluded. While Palestine was also west of Damascus, it was further south and not considered to be part of Syria.

Historians have long debated how far McMahon deliberately misled Hussein. It is probably best to see McMahon’s letters not just as an example of manipulative diplomacy, but also as contingent on the circumstances. After all, even the more explicit commitments of the McMahon-Hussein correspondence were completely contradicted by the Sykes-Picot Agreement of early 2016!

The latter Agreement was a plan to divide up the Middle East into regions run by the British and the French. The French felt they had been short-changed, but they got Syria – and Lebanon, which they later carved out from Syria. The British would not accept French rule in Palestine, however, since it was a little too close to Britain’s important strategic and trade route at the Suez Canal in Egypt to have a rival power sitting there. In discussing with François Georges-Picot, Britain’s Sir Mark Sykes sidelined the issue of Palestine by arguing that it should be managed under an international agreement, one that he was confident would favour British interests. That turned out to be the British Mandate for Palestine, endorsed by the League of Nations in negotiations after 1918, in which the British included the terms of the Balfour Declaration.(2)

It turned out that not even the Sykes-Picot Agreement between two imperialist powers was implemented as agreed. Responding to a more favourable conjuncture after 1918, the British were in a much stronger position than the French and no longer had need to take account of potential Russian incursions into the Middle East region, for which they had favoured a French ‘buffer’ in Syria. The British also decided to shift a portion of the Sykes-Picot ‘line in the sand’ and included Mosul in the newly carved out Iraqi state that they would control. This was seized from the defeated Ottomans and added to the oil reserves available to the British.

A deal with the Ottomans?

Britain’s second pre-Balfour plan for Palestine was discussed indirectly with the Ottoman Empire in July 1917. The British Foreign office sent Aubrey Herbert to Switzerland to discuss with Turkish dissidents the possibility of having a separate peace with Turkey. Herbert was a Conservative MP, the son of an earl and had considerable experience of the Ottoman Empire, which he much favoured over Tsarist Russia. For some time he had been advocating this plan, and the British government was happy to explore it as a means of weakening Germany’s position in the war.

As was typical of the British in these diplomatic discussions, much was implied and little was made explicit. Herbert said he was not authorised to discuss terms of an agreement, but he indicated that Britain would not wish to seize Ottoman territories. Instead it would allow continued Turkish control, with (left unsaid) the British pulling the strings as it had done in Egypt. There is no documentation of these discussions, but if they had reached fruition, they would have allowed Palestine, among other regions, to remain in a reconfigured Ottoman Empire.

In a memorandum to the Foreign Office after the Swiss meetings, Herbert made clear what kind of future he, and the British, had in mind for the Ottoman territories:

“If we get the luggage it does not matter very much if the Turks get the labels. When Lord Kitchener was all-powerful in Egypt his secretary was wearing a fez. Mesopotamia and Palestine are worth a fez.”

Nothing came of this Ottoman initiative, as indeed nothing came of the McMahon correspondence. They are nevertheless useful examples of how one should not take at face value the ‘news’ that does get into the headlines. Very often there is something else going on. Furthermore, as in many other cases, an investigation usually suggests that the term ‘Perfidious Albion’ does not do justice to the full extent of British duplicity.