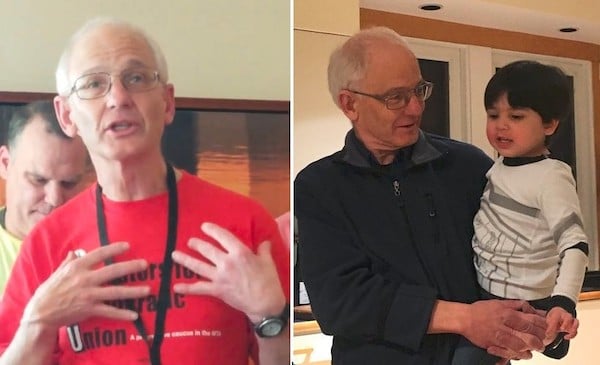 When Dan Clawson’s sudden death became known, the result was an outpouring of grief, and statements of appreciation. Of course, this is typical when someone dies, but what I read and heard from people are not the usual. A sampling:

Dan Clawson was born in 1948 in Alexandria, Virginia, and grew up in Chevy Chase, Maryland. His father worked for the government and so by obligation was politically unaffiliated, but more or less a conservative Democrat; his mother was more of a liberal Democrat.

Dan’s political activity developed slowly. As Mary Ann Clawson, his wife of 50 years stated, “he was always a man of strong integrity who was willing to speak truth to power, but he was not always an organizer.”

Nonetheless, when the Marines came to Carleton College in the late 1960s to recruit, Dan and Mary Ann decided to join the sit-in. Later, when they transferred to Washington University in St. Louis, they attended the local SDS chapter, found it sectarian and drifted away. Mary Ann vividly recalled the macho leftism that permeated student politics then.

More significantly, they got to know George Rawick, a professor who became Dan’s mentor. Rawick had belonged to a series of socialist groups and had been close to C.L.R. James and Martin Glaberman. He was also influenced by his experiences teaching Black autoworkers in Detroit.

As Rawick was writing From Sundown to Sunup: the Making of the Black Community, they read his drafts. The book was based on a treasury of oral interviews collected in the 1930s with formerly enslaved people. As such it was among the first books to present enslaved people as agents in their own history.

During that period, at Rawick’s suggestion, they read Capital together.

Dan’s dissertation was titled “Bureauc­racy and the Labor Process: the Trans­formation of U.S. Industry, 1860 to 1920” and ultimately published as a book by Monthly Review Press.

Kevin Young, a history professor who as a young scholar followed Dan’s work, sees Bureaucracy and the Labor Process as a pathbreaking historical study that shows how work became more hierarchical, bureaucratized, deskilled and degraded — not because bureaucracy and hierarchy were more efficient than prior systems of labor organization, but because those changes enhanced capitalist profits and control.

“While the adoption of new technologies or new systems of labor control such as Taylorism is often attributed to their superior productive efficiency, the book shows that class warfare by capitalists was the real motivation.”

But Dan’s scholarly focus shifted from how elites manage power to how working people can challenge this dynamic.

The Next Upsurge; Labor and the New Social Movements came out in 2003. One of the organizing efforts he analyzed was directed by Jane McAlevey. They stayed in touch over the years and he served on her dissertation committee.

Dan co-wrote Unequal Time: Gender, Class, and Family in Employment Schedules with Naomi Gerstel. Based on extensive observation and interviews, they highlighted the differing degrees of control over work hours experienced in the medical profession, focusing on implications of class and gender.

His latest labor-related scholarship, Labor in the Time of Trump, is an anthology of articles. The essays examine vulnerabilities in right-wing strategy and draw lessons from recent organizing efforts.

By 1978, when Dan began teaching at University of Massachusetts at Amherst,  there were more possibilities for action.

Dan didn’t waste any time. When the graduate student union picketed, although an untenured professor, he picketed with them. He also worked closely with a group of undergraduates to challenge the right-wing character of student government.

While he taught in Amherst, Mary Ann got a job as  a sociologist at Wesleyan University. Her focus was mostly on gender and popular culture. (She retired just last year.) They raised a daughter, Laura, who today writes for Daily Kos.

By the 2000s Dan found himself among a critical mass of like-minded professors including Stephanie Luce, Mark Brenner, Eve Weinbaum and Max Page. With the university cutting both faculty positions and their pay, the group got involved in the  Massachusetts Society of Professors. Over the years he and Max were elected to office in the MSP, and later, in the Massachusetts Teachers Association.

As faculty and students marched and lobbied the legislature, the group began to see a need for a state-wide group. In 2007, the Public Higher Education Network of Massachusetts was born. As PHENOM’s web page notes:

“It was Dan Clawson … who first pushed the idea of an independent organization that would advocate for public higher education …. When few were willing to talk openly, much less build an organization around the idea of free higher education, Dan was happy to do so …. It has become a mainstream political idea, widely discussed in presidential campaigns, and here in Massachusetts.”

Along with creating PHENOM, Dan and Max Page developed an interest in a state-wide focus. That had led them to join the MTA Board of Directors. Through this work Dan started to learn of the struggles K-12 teachers were having, especially around high stakes testing and charter schools. As Mary Ann puts it, “this was the beginning of a new chapter in his life as an activist.”

In MTA Dan and Max met others who were chafing at the politics of the current leadership. For example, even after the MTA convention passed a motion opposing the  linking of students’ standardized test scores to teacher evaluations, the MTA Board went along with the policy.

Educators for a Democratic Union, begun in 2012, was the result of these frustrations, and it gained steam quickly when a new outrage came to light.

It turned out that there had been actual secret backroom dealings between MTA leadership and the billionaire-funded “ed reform” group, Stand for Children. It was floating a ballot measure that would tie teacher evaluations to students’ test scores and eliminate seniority rights.

Polling data suggested the ballot measure would pass, so MTA leaders responded by giving in to much of what Stand for Children wanted and then announcing victory. They claimed this secret deal had been a necessary compromise to prevent something worse. Fighting back wasn’t an option they considered.

Contrast this to the period later on, when Barbara Madeloni won her 2014 campaign for MTA president — recruited by Dan, who became her campaign manager — and EDU began to take seats on the board and committees as well.

A new ballot measure, again funded by “ed reform“ billionaires, would dramatically raise the cap on the number of charter schools allowed in Massachusetts if it passed, and polls suggested it would.

No back room deals this time; Madeloni and the new guard in MTA led a fight, teachers went out into their communities and educated, and the measure was defeated by a landslide. Dan’s efforts in MTA changed the landscape of the statewide union, perhaps preventing the destruction of the school system in that state.

Madeloni was to win another term, to the shock of the old guard. Then in 2018 Merrie Najimy, an early EDU member, was voted in. All of this happened through the organizing efforts of EDU, with Dan each time devoting untold hours to counting delegates on spreadsheets, meetings, and strategizing. Max Page became vice president.

Mary Ann saw Dan entering a new phase as he went from being such an effective organizer on the outside that he ultimately found himself inside. Yet he didn’t stop organizing on the outside. As Mary Ann said, “he managed to reconcile these two ways of operating so they became one.”

Within the months before he died, Dan was a key figure in several efforts. UMass Amherst made headlines when a panel was organized in support of Palestinians, including big name speakers: Linda Sarsour, Roger Waters, Marc Lamont Hill, and Dave Zirin.

Under Zionist pressure, the university considered canceling. Some credit Dan’s efforts to organize the sociology department to back the event as instrumental in convincing the university to go ahead. Others also credit Dan with jump-starting the effort among Hampshire College faculty and students to come together to save this institution, whose alternative model of higher education is under threat.

Although he wasn’t part of the UMass Labor Center’s faculty, he played a supportive role, serving on its committees, working with its students and fighting for its survival.

He was talented at stepping up when that was needed, and stepping back when he’d recruited others to take over. As he retired from the faculty, he had many plans, including to devote even more of his time to organizing.

The week he died began with a faculty celebration of his retirement. It was to conclude with a gathering of friends to recognize the occasion. These friends eventually gathered for a very different purpose.
Because of a meeting, he’d put off having an angioplasty, a medical procedure to restore the blood flow through his artery, and suddenly died from a heart attack.

His heart troubles came as a shock to everyone. “He had great cholesterol,” said Mary Ann. He biked to work most days, went to the gym when he couldn’t, and “walked nine flights up to his office every day.” He worked hard, but it was work he loved to do!

A Talented Organizer with a Vision

Dan was a strong supporter of Labor Notes because it reflected his vision of social transformation, and it was his interest in Labor Notes that prompted him to then join Solidarity.

Barbara Madeloni put it well when she wrote: “What made him such a great organ­izer? Well, he talked to people. When he had a list he called up every person. He asked them questions. He listened. He made an ask: come to a meeting, sign a petition, run for office. And if he wasn’t successful at first, he didn’t give up hope. He came back, invited you into the movement, and gave you something to do.

So, yes, he did the work. But more, Dan’s organizing was sincere. He believed in our collective capacity to build a better world. He acted on that faith with each individual. His was a generous and determined heart. His manner communicated, ‘If we have a vision for a better world, we had damn well better be ready to do the work to get there. And, by the way, I have a plan.’”

He was also a loyal friend who used his strategizing ability in support of those around him, so that many came to him for help and advice when facing challenges. And more than one of us admired his ability to work collectively in the kitchen as well as in the realm of political action.

As a friend noted, “We marveled at the ability of Dan and Mary Ann to seamlessly work together to prepare a complex dinner for friends, achieving the benefits of division of labor without property ownership in the product. There should be a lesson for our society from that.”

Mary Ann likes to point out that Dan wasn’t always an organizer — in a sense, the first person he organized was himself. Then he organized us. Now we must carry on his legacy of organizing without him.