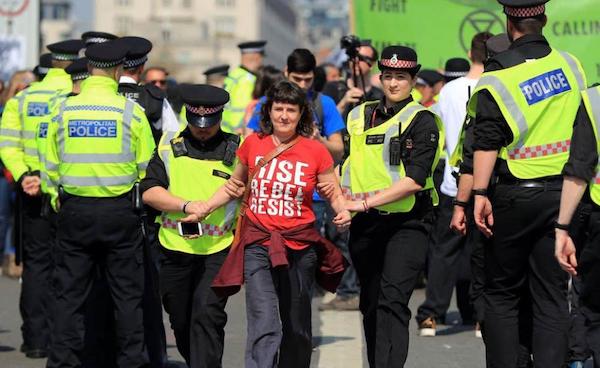 Policing in the Anthropocene

Extinction Rebellion (XR) is a direct action group organised on a global scale. The main target of their protests is are national governments who have demonstrated extreme inaction in the face of climate breakdown, despite stark warnings from the Intergovernmental Panel on Climate Change (IPCC).

XR campaigners recently brought parts of London to a standstill for almost two weeks. Actions have included gluing themselves to trains and organising roadblocks, as part of a planned “Week of Rebellion” in April 2019.

The Metropolitan Police Service arrested over 1,100 protesters and are aiming to refer their cases to prosecutors for conviction. Yesterday plans were announced for a “summer uprising”.

Tensions between climate campaigners and governments are rising across the world. The Polish Government banned members of the American group 350.org from entry, perceiving them to be a “threat to national security”.

Meanwhile, in Australia, thirteen XR protesters were removed from a sit-in at the lower houses of Parliament, while forty animal rights activists who chained themselves to vehicles at a busy intersection were arrested.

The choice of rhetoric in these two cases resonates with the nebulous term “domestic extremism”, used here in the UK.

This article reflects on what role the police will play as this new wave of climate activism becomes more prominent and as climate breakdown progresses. Historical and contemporary criminology can help us predict this role.

The police are primarily conceived of as crime-fighters, but another core function is “order maintenance”.

This means maintaining public order through minimising disruption in the daily life of a society in the broadest sense or in a more localised sense, such as making sure there is no unreasonable disruption on a city street.

However, scholars like Mark Neocleous, Peter K. Manning or Jean-Paul Brodeur, deem the maintenance of order not merely as a sense of quietude or peaceful busyness of “law-abiding” citizens. It can also mean the maintenance of a certain politico-societal orthodoxy, either directly through political policing or indirectly through the management of localised protest against governmental policies.

Brodeur points out this function of the police from its early incarnations in Tsarist Russia and Napoleonic France. It is an expression of the State’s Weberian capacity to maintain the monopoly on legitimate violence within its territorial boundaries.

Even the inception of the British Police in 1829, with the Metropolitan Police Force Act, attracts radical accounts such as from Mike Brogden, who points out its role in regulating nineteenth Century industrial labour and working class movements, as well as intervening in labour disputes between employers and labourers.

The expansion of the police force is an important co-development of the capitalist state, as it’s responsible for disciplining the expanding urban populace and workforce.

Postcolonial accounts of policing argue that before the Metropolitan Police Act of 1829, prototype forces such as the Irish Peace Preservation Force or the private police force of the East India Trading Company point to colonial disciplining of the populations of the colonies as another influence on the policing of the working class of the metropoles.

It is telling that in his history of the spread of policing to the Northern English provinces post-1829, historian Denis Storch quoted the contemporary moniker of the police officer as “domestic missionary”, who regulated and suppressed working class pastimes like cock-fighting, dog fighting and gambling.

This ‘domestic missionary’ broughty ‘enlightenment’ and ‘order’ to the ‘uncivilised’ working class populationsm as with the local populace in Ireland, Africa and Asia.

We see this kind of policing of workers in revelations of undercover police sharing data on strikers with private building companies, and getting them blacklisted from the entire construction industry in the 80s.

Revelations have also emerged of undercover police officers engaging in relationships with environmental activists, fathering children with women campaigners before disappearing without a trace.

After the arrest of 114 activists in advance of a suspected sabotage of work at a Ratcliffe-on-Soar power station, some of them suspected that Mark Kennedy had substantial involvement in planning the action.

Suspicions were also raised over the Special Demonstration Squad in the 1980s and the National Public Order Intelligence Unit as to whether they functioned as agent provocateursduring the 1987 firebombing of a Debenhams. The bombing was tied to an SDS operative named Bob Lambert who was embedded with an animal rights group.

The police also utilise direct enforcement of the law and overt restraint and arrest of campaigners.

Environmental activists have often been on the sharp end of political policing.

There were major inquiries around the use of large-scale kettling in the middle of the London and the death of a member of the public, Ian Tomlinson, after he was struck with a police baton.

Jackson, Monk and Gilmore have written on the direct police repression of resistance to fracking in the North West of England.

Fracking formed a key part of energy policy of the then Conservative-Liberal coalition, despite fears of impacts such carbon-intensive resource extraction presents for local people in terms of health and environment.

The land was privatised and physically enclosed, which was met with resistance from social movements.

Focusing on one enclosure in Barton Moss in Salford, Greater Manchester, the authors argue that the non-violent direct action of these groups were met with 200 arrests on the part of the Greater Manchester Police. Accordinly to Jackson, Monk and Gilmore, children, pregnant women, the elderly were among those arrested, and female protesters were assaulted and sexually harassed.

The police do this with the stated aim of ‘balancing’ the rights of democratic protest and the rights of the users of the city and to minimise disruption.

This is popular in terms of the everyday practicalities of living in and using a city, but it also maintains a status quo that inflicts on those more powerless sectors of society.

Earlier radical accounts it focussed on class contradictions and social inequalities. Today the carbon intensive economies of the developed world present a danger to the global climate.

The regulation of environmental protest will result in order being maintained in the name of upholding the hum-drum routines of urban transport, business, commuters and residents, but will be complicit in the disorders of anthropogenic climate breakdown.

There are several different scenarios suggested for the near-future. These range from warning of the collapse of human civilisation in 50 years, to the more restrained analyses of the IPCC, to the suggestion that those who live in the Global South will need to flee increasingly deadly climate conditions.

This latter scenario will result in the West further closing its gates and iron-fastening its walls to those fleeing imminent death. We see this already in ‘Fortress Europe, and the growth of far-right xenophobic movements in the U.S. and Europe.

Maintaining the status quo throws out of balance the conditions for necessary human life in vast swathes of the globe. These are not immediate considerations for the police, as they say:

“Throughout the course of today, Thursday, 18 April, we will have had more than 1,000 officers on the streets policing the demonstrations. This is putting a strain on the Met and we have now asked officers on the boroughs to work 12-hour shifts; we have cancelled rest days and our Violent Crime Task Force (VCTF) have had their leave cancelled.

“This allows us to free up significant numbers of officers whilst responding to local policing…the protesters need to understand that their demonstration is meaning officers are being diverted away from their core local duties that help keep London safe and that this will have implications in the weeks and months beyond this protest as officers take back leave and the cost of overtime.”

While the police may be correct in their summary of the immediate disruption that is caused, Extinction Rebellion are correct in focussing on the imminence of climate overshoot.

The twelve-year limit on avoiding climate collapse should be the utmost priority of political systems and may warrant severe civil disruption to force this on the agenda. The recent Parliamentary declaration of a climate emergency now needs action.

Willing arrest for peaceful direct action is part of XR’s theory of change.

Extinction Rebellion are engaging in “crimes” or “disruption” but these hold what the historian Eric Hobsbawm called a “social character”, in that “….they expressed a conscious, almost political challenge to the prevailing social and political order and its values”.

This approach has caused consternation on the part of other radical voices that point out the possibility of activist fatigue on its members, and the fact that potential ‘arrestables’ do not sit on a level playing field: there’s more at stake for a working class protester or person of colour in interacting with the police and carceral justice system.

The police cannot resolve the massive structural and civilizational changes that XR agitates for.

In future protests the can rely on established tactics such as ‘dialogue policing’, innovated in the wake of anti-austerity protests and controversies over scenes of police enforcement. These tactics have also attracted suspicion from protest movements as an extension of intelligence gathering, especially in light of revelations from the Undercover Police Inquiry.

A more fruitful path may lie in the discipline of criminology, where there is a move away from talking about “crime” and more focus on “harm”.

This refers to the damaging actions of more powerful actors, who cause much more harm through their seemingly ‘orderly’ actions than those who are the regular targets of the police, courts and probation service.

Likewise the petty criminality and disruption of groups like XR legitimately stresses the urgency of the real catastrophe facing us from climate breakdown.

Dr. Aidan O’Sullivan is a lecturer in criminology at Birmingham City University. His PhD focused on how the Metropolitan Police Service policed anti-austerity protests in London. He tweets @aidanosu.