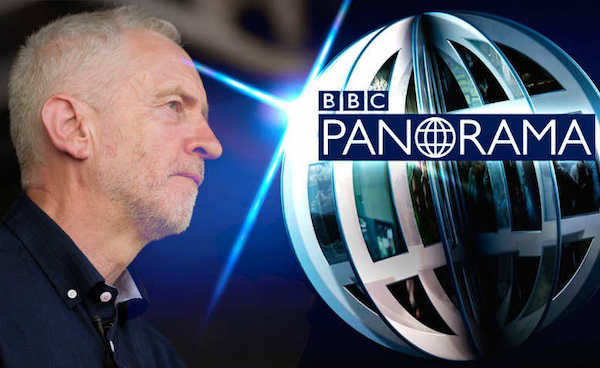 It is worth mentioning first of all that Panorama has not done a story on racism in months. This is astounding, given the Tory government’s victimisation of the Windrush generation, Theresa May’s ‘hostile environment’ policy, the growth of the far right, and the claims of extensive Islamophobia in the Tory Party, not to mention the number of openly racist statements made by Boris Johnson, Britain’s likely next PM.

Furthermore, the journalist behind this episode, John Ware, has a track record of targeting Muslims, the left and the Palestinian cause. This includes one Panorama episode where he accuses a Palestinian charity of being a front for terrorism, for which the BBC was forced to apologise and pay libel damages to the General Manager of Islamic Relief UK. That a rare Panorama episode on racism is now aiming at the left, and being fronted by a man like this, is remarkable.

The programme comes as three Labour peers, led by Lord Triesman, resigned from Labour this week citing institutional antisemitism in the party. Although, as is often the case with such charges of antisemitism from those hostile to Corbyn, no concrete evidence or examples of antisemitism have been given. However, his suggestion of a lack of commitment to NATO or to the EU, and accusations of “callow support for authoritarian leaders, not least Putin” appear to indicate more cynical motives and deep ideological differences with Corbyn and his politics.

The programme relies heavily on anecdotal evidence from a small number of members and ex-members. That’s not to assume that they are untrue, certainly not to deny that antisemitism exists. However, I think it is worth pointing out that, as anyone who has worked in any kind of public or commercial setting knows, the response procedures to allegations such as these never rest exclusively on the say-so of one individual. Less still are they taken as evidence that a particular issue, racism or otherwise, is endemic in the organisation. There should always be an attempt to establish an objective understanding of what is going on. For this, some data would surely help.

An investigation carried out by Labour General Secretary Jenny Formby found that since April 2018, 0.08% of Labour members have been involved in substantiated allegations of antisemitism. According to YouGov, antisemitic attitudes are far more prevalent in the Tory Party, whilst in Labour such attitudes have actually decreased since Jeremy Corbyn became leader.  A study by the Institute for Jewish Policy Research in 2017 shows, unsurprisingly, that antisemitism is by far most prevalent on the far right.  By no stretch of mathematics does any of this data stand as evidence that there is a particular problem of institutional antisemitism in the Labour Party.  It does reveal, however, that antisemitism is being completely overlooked where it is actually prominent. I’m not at all surprised that the programme didn’t mention any of this.

The programme also targets the Palestine solidarity movement, by making conflations which so many of us have become familiar with. Ware asserts that solidarity with the Palestinians ‘blinded some to antisemitism’. This is absolutely not the experience of those who attend the wonderfully diverse demonstrations in solidarity with the Palestinian struggle, where Jewish groups are often present, where anti-imperialism and anti-racism go hand-in-hand, and where there is always a loud and enthusiastic response to speakers who mention the need to oppose racism in all its forms, including antisemitism.

But, once again, there is a fudging of the definition of Zionism as something which is inseparable from Jewish identity, and concluding that it is therefore antisemitic to oppose Zionism. It is necessary, therefore, that we continue to be absolutely clear on what Zionism is and why we oppose it. Zionism is an expansionist colonial project, sponsored by Western powers with the aim of maintaining a client regime in the Middle East. This has led to the decades-long dispossession and military occupation of the Palestinians, creating a brutal apartheid regime and a huge refugee population.

It follows, therefore, that any serious opponent of imperialism must necessarily also be an opponent of Zionism. Conversely, support for Zionism is essential for any backers of current UK foreign policy, which of course include the Tory government as well as Corbyn’s most determined opponents in Labour. Establishment smears against the Corbyn project have always been as much about maintaining Western interests in the Middle East as they are about countering the threat from the left at home.

Some antisemitism does of course exist in the Labour Party. Like all forms of racism, antisemitism is a regular feature of society which will inevitably be reflected to some degree in its largest political party. This is especially believable when you consider the flirtations with various conspiracy theories which exist on some parts of the left. In the case of some individuals, this can become an obsession which often includes antisemitic tropes about financial cartels and plots for world domination. Often, they will place Israel at the centre of this world view, arguing that it is somehow controlling Western foreign policy (the opposite is actually true, since the very existence of Israel historically relies on US/UK sponsorship).

I must say, however, that in over ten years as an active socialist, anti-imperialist and Palestine supporter, I have found these views to be very marginal and they often get very short shrift in meetings. They are, after all, completely antithetical to a principled opposition to capitalism, racism and imperialism. In the case of Stop the War and the Palestine Solidarity Campaign, anyone promoting these views has been challenged or, where necessary, excluded.

But if such a conflation between Zionism and Judaism is sometimes mistakenly made by individuals on the left, amongst Corbyn’s leading opponents it is systematic. The strategy is to paint as much of the radical left as possible with the antisemitic brush. There are several instances in the documentary where people are automatically assumed to be using the word ‘Zionist’ as a euphemism for ‘Jew’, as if they are engaging in some kind of covert dog whistle racism (impossible to prove in the scenarios described) rather than making a sincere criticism of Israel and its supporters. Footage is also shown of Corbyn supposedly being antisemitic by suggesting Israel was playing a role in undermining the Egyptian Government following the Arab Spring. Given that Israel shares a border with Egypt, and has a history of assisting Western military intervention there, I would’ve thought that this was a reasonable suggestion.

It is this strategy of overgeneralisation by the Labour right and the establishment, together with repeated retreats by the left, which enabled Labour MP Siobhan McDonagh to go even further earlier this year by suggesting that it is antisemitic to even oppose capitalism. Along with weaponising the issue of antisemitism in this way, and exaggerating its scale within Labour, comes the other line of attack – to pin it all on the most left-wing and anti-racist leader the party has ever had.

But the mistake made by too many on the Labour left has been a failure to call out the smears for what they are, instead assuming that every accusation of antisemitism in this context is made in good faith. Front bench MP Andrew Gwynne, there to represent Corbyn, was predictably weak in his responses when challenged. He stuck to the failed script of pleading that ‘we’re doing everything we can about this’. Not once did he even suggest a smear campaign by Corbyn’s political opponents, the findings by Jenny Formby, the Palestinians, or the much greater problem of racism in the Tory Party, including the likely next Prime Minister.

While maintaining a focus on antisemitism and other forms of racism where they do exist, some of us have been consistent in pointing out that Corbyn’s politics, and the hope he represents for millions of people who want an alternative to austerity and war, mean that the political and media establishment will stop at nothing to sabotage this project. Right wing opponents in the PLP are not concerned with antisemitism as much as they are concerned with ousting the left from leadership of the party. This is a deeply ideological commitment, wedded as they are to the legacy of Blairism. They cannot forgive him for leading a resurgence of the left within Labour and they will never accept a radical left-wing leader in charge of one of the two main parties of the British parliament. This is why they have taken every retreat by the left as an opportunity, not for reconciliation, but to stick the knife in deeper.

This documentary ought to be a wake-up call to those who believed that allowing the IHRA definition of antisemitism to pass would put all of this to bed. It has only given more ground to the right wing of the PLP and the political and media establishment. But with the most profound crisis of the British state and the Tory Party, it must be abundantly clear by now that our only option is to mobilise the movements against austerity, war and racism, build on the advances made by the left in recent years, and call out these disgusting smears for what they are.