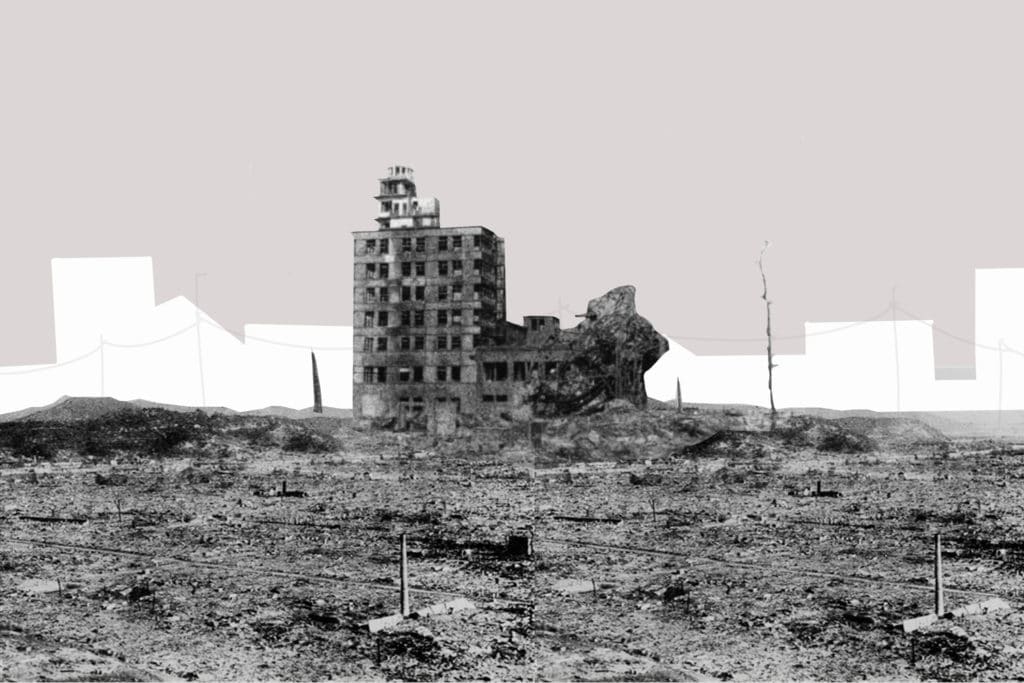 On 6 August 1945, the United States military dropped a bomb that contained 64kg of uranium-235 over the city of Hiroshima (Japan). The bomb took just over 44 seconds to fall from 9,400 metres and detonated 580 metres above the Shima Surgical Clinic. Over 80,000 people died instantly. This was the first use of the nuclear bomb. 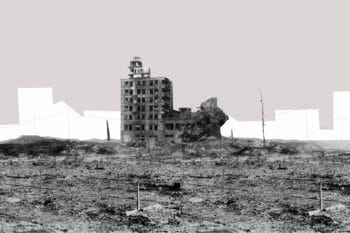 Four days later, Satsuo Nakata brought the Domei New Agency’s Leica camera to the city. He took thirty-two photographs of the devastation; each of these pictures–archived in the Hiroshima Peace Memorial Museum–is iconic. The force of the bomb flattened the city, even though less than 2% of the uranium detonated. Nakata took a picture of the office of the newspaper Chugoku Shimbun and of the Odamasa kimono store. The store’s metal twisted into a whirlwind. It is a sign of the power of this weapon. As Toge Sankichi, a hibakusha (survivor of the atom bomb) and poet, wrote of that power and its impact, as the fires burnt down from the bomb’s power in a city of 350,000: ‘the only sound–the wings of flies buzzing around metal basins’.

This past June, an eighty-nine-year-old hibakusha, Ai Masuda, returned to Hiroshima. Seventy-four years ago, Ai Masuda (then age 15) ran through the city in search of her cousin Harue (then age 13). ‘Harue’, she said as she looked into the Motoyasu River, ‘I am sorry I was unable to find you’. Ai and Harue were students at the Hiroshima First Municipal Girls’ School. Six hundred and sixty-six students, including Harue, and ten teachers died in the blast. ‘Everyone died such a cruel death’, Ai Masuda recalled. ‘I found myself gazing at scenes from hell’.

Shigemoto Yasuhiko was also 15 on that day. His haiku on Hiroshima stills the heart:

Hiroshima Day –
I believe there must be bones
Under the paved street. 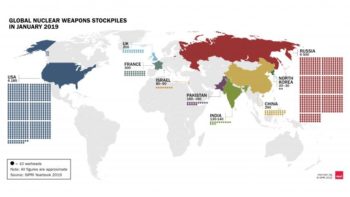 Last week, the United States withdrew from the Intermediate-Range Nuclear Forces (INF) treaty that has been in place since 1987. The INF is part of a series of treaties that–it is often hoped–will draw the world back from a nuclear war. To remind us of the perils of our time, the Bulletin of the Atomic Scientists’ Doomsday Clock is stuck at two minutes to midnight. For the atomic scientists who designed this clock in 1945, in the aftermath of the U.S. strike on Hiroshima and Nagasaki, ‘midnight’ designated the apocalypse. Two minutes to midnight is as close to annihilation as possible. Anything less than that puts us to the point when the bomb begins its descent to earth (a journey that took less than a minute in 1945). The Bulletin’s statement from January says that the twin perils–climate change and nuclear conflict–put ‘the future of civilisation in extraordinary danger’.

Withdrawal from the INF treaty is only one sign of danger. Another is that the various nuclear powers–led by the United States–have once more placed their nuclear weapons at the heart of their military strategy, and they have begun to spend obscene amounts of money towards the modernisation of their nuclear weapons force. The U.S. plans to spend $50 billion per year for the next decade, 23% more than a 2017 estimate. This annual increase is the same as the total military budget for the United Kingdom, and it is merely to modernise the U.S. nuclear arsenal.

The Stockholm International Peace Research Institute (SIPRI) has recently released its Yearbook on armaments, disarmament, and international security. The world’s most powerful nuclear forces are found in the United States, Russia, the UK, France, China, India, Pakistan, Israel, and North Korea. The collapse of the INF treaty is a sign of the end of even the pretence of nuclear disarmament. The Treaty on the Prohibition of Nuclear Weapons (TPNW) was negotiated in 2017  but has not been ratified. In this climate, it will likely not be taken forward, despite the efforts of the International Campaign to Abolish Nuclear Weapons, which won the Nobel Peace Prize in 2017 for the TPNW. 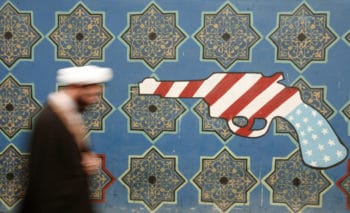 An Iranian cleric walks past a mural on the wall of the former U.S. embassy in Tehran February 21, 2007. REUTERS/Morteza Nikoubazl (IRAN) – RTR1MNFK

SIPRI’s Yearbook notes that Iran–which neither has nuclear weapons nor has indicated aspirations to have nuclear weapons–‘continued to implement the 2015 Joint Comprehensive Plan of Action (JCPOA)’. The JCPOA–also called ‘the Iran nuclear deal’–was negotiated by Iran, the five permanent members of the UN Security Council (China, France, Russia, the United Kingdom, and the United States), Germany, and the European Union, and then ratified by the United Nations. In May, the U.S. government abandoned this deal, which put restrictions on Iran’s nuclear energy programme. The U.S. withdrawal has destabilised the region, with the Bulletin of Atomic Scientist saying that both this unilateral withdrawal by the U.S. from the Iran deal and the INF are ‘grave steps towards a complete dismantlement of the global arms control process’.

And yet, the finger of blame for tension in West Asia seems to point towards Iran.

Our Tricontinental: Institute for Social Research dossier no. 19 (August 2019) offers an Iranian point of view on this conflict. We spoke to Seyed Mohammad Marandi of the University of Tehran, who succinctly walked us though the situation inside Iran and the dangerous hybrid war being prosecuted against Iran. From Tehran, Marandi says that Iran is not isolated nor is it going to be provoked into a war. Iran will defend its sovereignty and its rights, but it will do so in a sober manner. The U.S. unilateral sanctions, he says, are illegal, yet they have an impact because of the United States’ hegemony over the financial system and because of the spinelessness of the Europeans. Any European attempts to save the JCPOA, including the INSTEX mechanism, have been cautious (as Iran’s Foreign Ministry’s Abbas Mousavi indicated). The United States has been putting pressure on shipping lines by de-registering ships and by enforcing rigorous customs checks for ships that have come from Iran. A naval force led by the U.S. in the Straits of Hormuz is designed to increase tension.

Such provocations, Marandi says, are a sign of U.S. weakness–not strength. ‘What prevents the United States from attacking Iran is definitely Iran’s internal strength’, he said, ‘and its regional capabilities, but obviously Iran’s close relationship with the Russians and the Chinese significantly strengthen Iran’s hand too’. Of these ‘regional capabilities’, Marandi must have Lebanon’s Hezbollah in mind. A few weeks ago, Hezbollah’s Secretary General Hassan Nasrallah laid out his party’s plan if Iran is attacked:

There is a military angle here. The U.S. has been bogged down by a war in Afghanistan (Heela Najibullah’s recent article lays out the political weakness in the country, which will likely allow the Taliban to return to power). The United States’ illegal war in Iraq showed the weakness of its power; Iran, with twice Iraq’s population, will be nearly impossible to subdue. Even militarily, Marandi says, a $20,000 home-made Iranian missile brought down a $200 million U.S. drone. 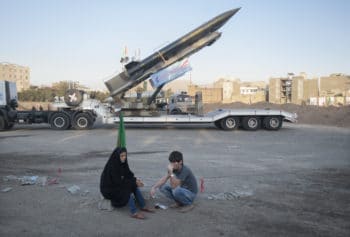 An Iranian couple rest as they sit in front of the Iranian surface-to-surface Zelzal missile while visiting of a war exhibition to mark Iran-Iraq war (1980-88) anniversary at a Revolutionary Guard Corps military base in northeastern Tehran, September 26, 2011.

Dust thrown into the wind towards Iran by Donald Trump has muddied any clear thinking. According to the Nuclear Non-Proliferation Treaty (1968), of which Iran is a signatory, Iran has the right to enrich uranium for the purposes of power generation. The US, for the past two decades, has insisted that Iran’s attempt to enrich uranium will facilitate a nuclear weapons programme. To make a nuclear weapon, ‘weapon-grade’ uranium or Highly Enriched Uranium (HEU) is needed. HEU refers to anything with 20% or more uranium-235 and ‘weapon-grade’ is often enriched to 90% uranium-235. What Iran has does not qualify to be even the lowest-grade HEU. Iran is currently at 4.5%, far below any threshold for a nuclear weapon. The dispute between Iran and the U.S. does not hinge on nuclear weapons–it hinges on the U.S. refusal to allow Iran the right to a nuclear energy programme (which includes enrichment).

Frankly, there is a broad discussion to be had about the perils of nuclear energy. There have already been three dangerous meltdowns at nuclear power plants: Three Mile Island, USA (1979), Chernobyl, USSR (1986), and Fukushima Daiichi, Japan (2011). There is also the question of the toxicity of uranium mining as well as the toxicity of radioactive waste (including fouled water). But this debate is not one that can be restricted to Iran; it is a debate that must include the United States and France, which have the largest number of nuclear power plants. One in five nuclear reactors on the planet are in the United States; France dominates Niger as a consequence of Orano’s hold on the town of Arlit. We, at Tricontinental: Institute for Social Research, are working on a Briefing on the world’s uranium corporations. The ‘uranium cartel’–Rio Tinto, Cameco, Orano (formerly Areva), and Kazatomprom–are of special interest to us. 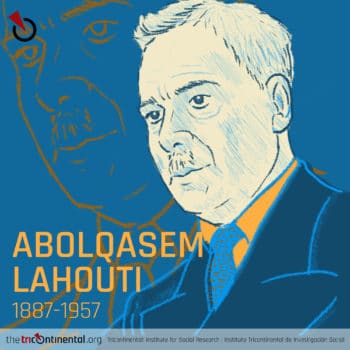 The Trump administration has sanctioned Iran’s Foreign Minister, Javad Zarif–a sophisticated diplomat who was the architect of the JPCOA. By trying to isolate Zarif, the U.S. has said that it is not interested in the diplomatic road. This is a very worrying development and should be roundly condemned. Zarif, for his part, simply said that the United States is isolating itself.

The pictures in the dossier are taken by the Tehran-based photographer Morteza Nikoubazl.

We seek help from no one
Sufficient for us are the workers’ hands.