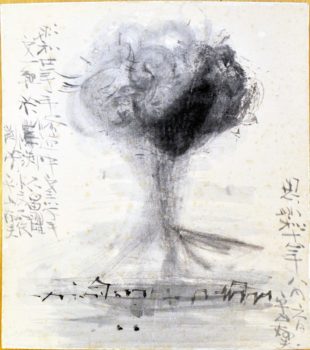 Ikuo Hirayama, Thinking Aug. 6 in the 20th year of Showa

Dark skies persist over coastal Brazil, where the country’s major population centres are to be found. This year, there have been 40,341 fires in the Amazon, the highest since 2010. The country’s president–Jair Bolsonaro–refused to admit the gravity of the situation, blaming the fires on NGOs. Bolsonaro’s constituency is to be found less amongst Brazil’s population and more in the political groups colloquially called ‘Beef, Bible, and Bullet’–the lobbies of the armed forces, the evangelicals (largely Pentecostal), and the agri-business conglomerates as well as the mining companies. The latter have wanted to seize large tracts of the 1.6-billion-acre Amazon, the world’s largest carbon sink. Hatred for Brazil’s Amerindian population comes because these communities (just 0.6% of Brazil’s population) contest the property rights of ranchers and miners over the precious Amazon. The language from Bolsonaro, the miners, and the ranchers is genocidal, and their behaviour towards the planet is annihilationist. These are dangerous people, with motives of Money overwhelming humanity.

If not for the global protest against these fires, and if not for Bolivia’s Evo Morales hastily hiring a Boeing 747 to drop water on the fires, it seems unlikely that Bolsonaro would have done anything. Laissez-faire is only evoked when it comes to the destruction of the lives of ordinary people (austerity) and to the planet (climate catastrophe); the flag of laissez-faire is hidden when it comes to bailouts and backstops for the international private banks. 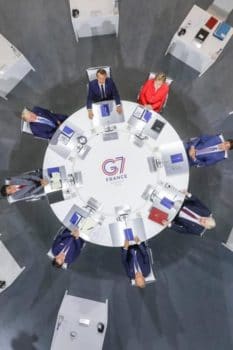 Heads of state of the G7 powers in Biarritz, France

Bolsonaro’s attitude to the Amazon mirrors that of U.S. President Donald Trump’s attitude to the planet. During a discussion about the hurricanes that tear across the Atlantic Ocean and imperil the U.S. coastline, Trump said he would consider using nuclear weapons against them. This is no idle threat. ‘We drop a bomb inside the eye of the hurricane, and it disrupts it’, Trump said. ‘Why can’t we do that?’–well, because it would hasten the planet to extinction, that’s why. Trump is not alone here. In 1961, Francis Reichelderfer, the head of the U.S. Weather Bureau, imagined ‘the possibility someday of exploding a nuclear bomb on a hurricane far at sea’. Fortunately, no one with a finger on a nuclear bomb thought this to be a particularly good idea.

In last year’s nuclear posture review, the U.S. military added in $500 billion for its massive arsenal. This included $17 billion for low-yield, tactical nuclear weapons. The very idea of ‘low yield’ as a way to talk about nuclear weapons show how normal it has become to consider their use in battlefields–and against hurricanes. Based on this review, the U.S. government will soon take delivery of these W76-2 warheads from the Pantex facility in Texas. Each of these warheads carries a blast yield of 7 kilotons of TNT (half the power of the bomb dropped on Hiroshima).

Last year, the Swedish Air Force dropped a GBU-49 laser guided bomb over a forest fire. The blast wave partly wiped out the oxygen that fed the fire. Terrifying to think that the antidote to forest fires will be bombing runs, the cure for hurricanes will be nuclear war. This is a war against the planet, insanity upon insanity, the hard edge of inhumanity at the controls.

All this only seems acceptable because of the singular power of the military in the modern world. Even though a military dictatorship is seen as improper, civilian leaders lean on the military and on the culture of militarism for their authority. Preventative solutions are scoffed at, while military solutions are seen as realistic. At the 45th G7 summit at Biarritz (France) a few days ago, the French government invited the Iranian foreign minister Javad Zarif. Only the French met with Zarif, who had come in good faith to negotiate a way out of the standoff in the Gulf. Trump yawned and shared a frat house joke with the UK’s Boris Johnson. Diplomacy was shunned. The bombers are ready. Trump wants to speak through them. 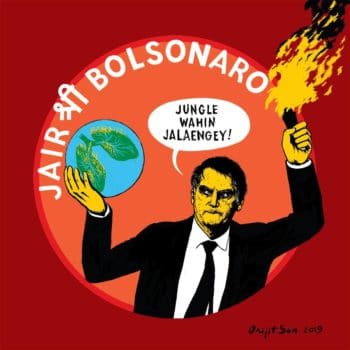 Bolsonaro by Orijit Sen, 2019
Bolsonaro says: We’ll Burn the Jungle Right There (an echo of a right-wing slogan in India, We’ll Build the Temple Right There, on top of a mosque).

The heads of government at Biarritz came with stunningly low approval ratings–Boris Johnson unsure if he will last in office for another month, while Justin Trudeau of Canada with poll numbers at the 35% mark. Italy’s Giuseppe Conte is already on his way out, while Germany’s Angela Merkel will step down in 2021. Between Brexit and the fiasco in Italy, confidence in these people is at a low. Yet, they with a wink they can destroy nations with their bombers and their banks.

Bolsonaro, who is presently angry at Macron for his criticism of the Amazon fires, would have loved to have been there. Farmers in France, Finland, and Germany are eager to cut the export of Brazilian meat into Europe, as part of a campaign to cancel the recently signed trade deal between the European Union and Mercosur (the trade bloc of Argentina, Brazil, Paraguay, Uruguay, and Venezuela). Brazil is eager to be part of the OECD (Organisation for Economic Cooperation and Development), the elite group of 36 states that claim to be the most highly developed countries, and that are therefore able to attract investment. It is likely that the OECD will no longer take Brazil’s application seriously, since there are now doubts about Brazil’s commitment to the OECD environmental standards. Bolsonaro is being forced to run backwards to keep the trade deals and the OECD hopes alive.

Macron had not invited Bolsonaro, but he did invite India’s Narendra Modi. A few days before the G7, the two men met and discussed the corrupt arms deals that bring India and France together–thirty-six Rafale jets will soon arrive in India at a cost of € 7 billion. The recently released Global Hunger Index has India at 103 out of 116 countries (Brazil, thanks to the Fome Zero scheme of former President Lula, is at 31). The measure of modernity is no longer an end to hunger, but a better air force.

Macron raised the question of Kashmir–where seven million Kashmiris are imprisoned. Last week, twelve senior Indian opposition politicians flew into Kashmir’s capital–Srinagar. They were asked to come by the Governor to observe the situation, which the government has claimed is normal. The political leaders were detained in the airport and then sent back to Delhi. This is the second time that the leaders of the Communist parties (Sitaram Yechury and D. Raja) were refused entry into Kashmir (for more on Kashmir, see our Red Alert #1). Modi said nothing. Kashmir remains suffocated. 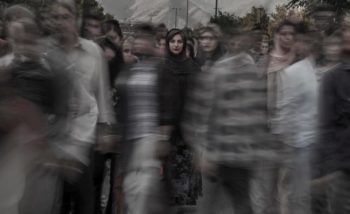 Shadi Ghadirian, Too Loud a Solitude, 2015

A Greek poet–Jazra Khaleed–sings of the need for a new language in these ugly times, these days of austerity and bewilderment. ‘In need a new language, not pimping’, he says in Peter Constantine’s translation.

I’m waiting for a revolution to invent me.
Hungering for the language of class war
A language that has tasted insurgency.

Impossible to remain within the lines drawn by the powerful, to accept the chatter about nuclear bombs fired at hurricanes and the reality of seven million Kashmiris silenced. Complicity is unacceptable, unthinkable.

A few weeks ago, I spent the day at the Camp Marielle Vive settlement outside Valinhos (Brazil). The Movement of Landless Workers (MST) organised a thousand families to live on this land named for the murdered socialist politician. These men and women work hard to maintain the world that benefits such a small population. Yet, they cannot even find a place to live. Their problem is landlessness and indignity, for which there seems to be no solution. So, they have become their own solution. At the camp, I met two young girls–Ketley Júlia and Fernanda Fernandes. They were so happy to tell me that on each Sunday they gathered at the schoolhouse at the Camp and studied English. ‘When you write the article about our Camp’, they said, ‘we will translate it into Portuguese’. My article on their camp can be read here. 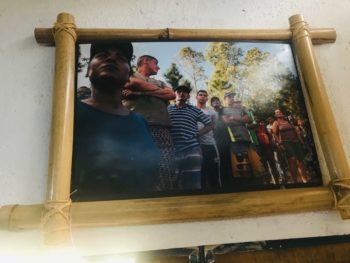 Luis Ferreira da Costa and others, a vigil for their camp, now a monument to their tenacity

Ketley and Fernanda know this Camp to be their home. A local judge has called for their eviction. This is the world we live in, a world where ordinary people settle on land owned by a real estate speculator, they build a community on that land, they plan to do agro-ecological farming, and yet it is this community that must be torn apart. Their dignity is not relevant. In their bones, Ketley and Fernanda know what it must be like to be Palestinian or Kashmiri, or to be any one of those people who are thrown from their land so that speculators can build a parking lot or a mall. They can hear in their ears the language that has tasted insurgency. They hear the language of the class war as spoken by the elite: the hushed tones of the judge’s verdict, the roar of the bulldozer, the harrowing sound of the laser-guided bomb. What will their language of the class war sound like?