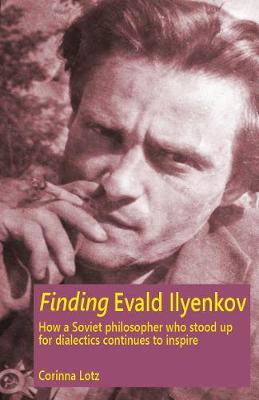 Corinna Lotz Finding Ilyenkov: How a Soviet Philosopher Who Stood Up for Dialectics Continues to Inspire

Corinna Lotz’ Finding Ilyenkov can be read in a few hours, but for those readers taken with its ideas and appeal to the relevance of Ilyenkov’s life and theory, this book provides a salient and fecund starting point for any variety of in-depth engagements relating to Ilyenkov, dialectical materialism and creative Soviet Marxism. This is a lovingly and comprehensively researched introduction to Ilyenkov’s thought, history and influence that will pique the interest of non-scholars and scholars alike. The book is divided into six concise chapters, including the introduction, which follow the course of Ilyenkov’s life, his work and its dissemination in a broadly chronological manner.

In the introduction and first chapter, the author frames her concise, fluid and well-analysed exposition of Ilyenkov’s body of work in relation, or more often in opposition, to past and current philosophical schools, including the official Soviet doctrine of dialectical materialism, diamat. Using the recently discovered and translated full text of the ‘Theses on Philosophy’ (1954), presented by Ilyenkov and his colleague only one year after Ilyenkov had completed his dissertation, Lotz shows that Ilyenkov was not merely content with rehearsing Soviet orthodoxy, but wanted philosophy to be a living practice (2-6). The ‘Theses’ are an open attack on the Soviet philosophy of the time, insisting that philosophy still had a role as an independent area of inquiry with both epistemological and metaphysical import. Among other things, the ‘Theses’ made positive references to Hegel, which provided the philosophical establishment of the time with material for charges of idealism and revisionism (7). This presentation set both Ilyenkov and his co-author apart from the majority of their colleagues, but also provided the basis on which Ilyenkov would be singled-out for scathing personal and professional critiques and censure the rest of his life (6-8).

Even though Ilyenkov was given a short reprieve during the Khrushchev Thaw (1956-1964), his work nonetheless came under constant and fierce attack primarily because it openly cut against the grain of official diamat, which had been formalized in Stalin’s Dialectical and Historical Materialism (1938). In her exposition of Ilyenkov’s ideas, paying specific attention to the concept of the ‘Ideal,’ Lotz puts welcome emphasis on Ilyenkov’s embrace of contradiction in the face of the Kantian antinomies of reason (12-13), which mirrors Hegel’s positive reconfiguration and affirmation of Kant’s antinomies as something ‘reason must run up against’ and through (Hegel, 2010: 158). In the most general terms, Ilyenkov’s ‘Ideal’ is a concept that refers to the cultural and material products of humanity achieved through activity and labour that is dependent upon, but cannot be reduced to individual consciousness and action (13-14). The Ideal provided Ilyenkov with a method, true to both Marx and his Hegelianism, to critique the neo-Kantian and positivist trends prevalent in the philosophical culture of his day. Furthermore, Ilyenkov saw his conception of the Ideal affirming the dialectical contradiction found in Marx’s Capital (e.g. use value vs. exchange value) (12). To this end, Lotz argues that according to Ilyenkov,

[t]he Ideal is internally contradictory. It exists in a negated way in the individual but also has an independent existence outside of the individual. It is objective because it is not the property of, nor does it arise from, one individual’s actions in the world— it is the objective form of the whole social existence of human beings (13).

For Ilyenkov, the positive (re)affirmation of contradiction provided the necessary grounding for any philosophy that wished to move beyond the neo-Kantian confines and strictures of bourgeois thought (13-14).

Chapters two to four provide an overview of the dissemination of Ilyenkov’s work at home and abroad during and after his lifetime. Lotz gives a fascinating description of how Trotskyists, primarily Gerry Healy, played a key role in bringing Ilyenkov’s ideas to the United Kingdom in the late 1970s, where they both informed theoretical debates and questions of political practice (19-21). She also discusses the eventual controversy raised by some Trotskyists about promoting a ‘Stalinist,’ which Lotz indicates was a reductive misnomer at best (22-23). From here, Lotz details how Soviet ‘openness’ in the early 1980s helped introduce and solidify Ilyenkov’s contribution to education and psychology in the United States and a number of Scandinavian countries (27). In these contexts, Ilyenkov’s focus on activity as being the generator of the Ideal and, therefore, knowledge, among other things, was used for a number of purposes, including providing a theoretical basis for the primacy of practice in the process of learning and child development (30-33, 41).

Chapter 4 hones in on Vesa Oittenen’s engagement with and promotion of Ilyenkov’s ideas. Given that Oittenen is an important Finish scholar that has written extensively on Ilyenkov’s philosophy, including critical appraisals of Ilyenkov’s work, this chapter will be of special interest to those engaging with current scholarship on Ilyenkov from a philosophical perspective. Namely, Lotz describes Oittenen’s leadership in convening an international symposium on Ilyenkov in 1999, which resulted in the publication of Evald Ilyenkov’s Philosophy Revisited in 2000, the second English-language full-length study of Ilyenkov (41). Lotz also identifies the significance of the David Bakhurst’s 1991 Consciousness and Revolution in Soviet Philosophy: From the Bolsheviks to Evald Ilyenkov on increasing Ilyenkov’s presence in Enlgish-language philosophy.

The final chapter brings us to current day. In this chapter, Lotz identifies current projects in Ilyenkov studies, including the work of Andy Blunden in translating and editing Ilyenkov’s works for the Internet Marxist Archive, as well as Ilyenkov scholar Andrey Maidanksy in maintaining a ‘multi-lingual Ilyenkov Intenet archive’ (46). This chapter also includes a fascinating account of the author’s own engagement with Ilyenkov, through the UK Marxists group, during the early 1990s (43-44). This involved members of UK Marxists, including Lotz, going to Russian in order to meet with and interview Ilyenkov’s former classmates, colleagues and friends. Among other things, these interviews helped reveal some of the context surrounding Ilyenkov’s tragic suicide in 1979 (44, 48).

Reading this book was highly engaging and inspiring in terms of how it makes explicit Ilyenkov’s continued relevance to philosophy, education, and psychology, despite the efforts made during his lifetime to censor, if not bury, his work. The only note of caution that can be raised is that Lotz’ approach to Ilyenkov lacks any significant critical commentary. While there is sufficient attention paid to Ilyenkov’s critics in the diamat state apparatus, this is done largely to emphasize that Ilyenkov was single-minded in his pursuit of good philosophy and willing to challenge calcified and hostile structures of power. Lotz’ treatment of Oittenen could have benefitted from an engagement with Oittenen’s criticisms of Ilyenkov, which are hinted at (39). Further, the book seems to describe Ilyenkov as primarily being focused on epistemology (11-12, 29, 31), whereas, as Oittenen is cited in the book as saying, Ilyenkov ‘stubbornly insisted on the unity—yes, the identity—of dialectics, logics, and the theory of cognition’ (p37). As this hints at, Ilyenkov, in fact, rejected the epistemological focus of his neo-Kantian colleagues, which puts knowledge within the confines of the conditions for the possibility of knowing. The neo-Kantianism that Ilyenkov rails at extensively in his work (cf. Ilyenkov, 2018), puts logic in the mind alone, leaving thought out of touch with the world. By extending logic to dialectics and the theory of cognition, Ilyenkov is in effect unifying epistemology and metaphysics, making logic immanent in the world as a concrete totality. Having said this, it should be noted that the Lotz acknowledges being restricted by space and, therefore, what she could tackle in a slim volume. This should not detract from anyone interested in Marxism, including scholars interested specifically in creative Soviet Marxism and Ilyenkov, from engaging with this illuminating work. This call for a return to Ilyenkov is welcome.