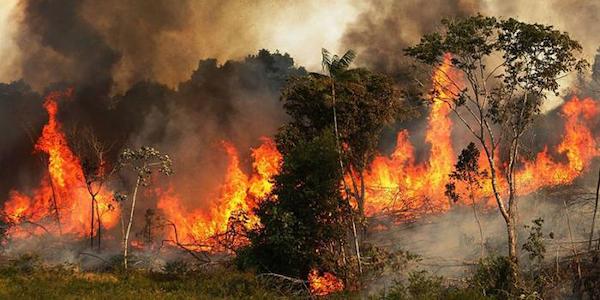 The Amazon fires have made headlines internationally, since this rainforest is one of the world’s most important natural preserves, producing 20% of the oxygen we breathe. Photo: NASA

June 12, 1992, in Río de Janeiro, Brazil, Fidel Castro presented a brief but masterful speech during the United Nations Conference on Environment and Development. Those present applauded, including a few heads of state who weren’t too happy with what he had to say, but recognized the validity of his words.

What has happened since then, in terms of the climate change to which Fidel was referring, when he warned, “An important biological species is at risk of disappearing due to the rapid and progressive liquidation of its natural living conditions: man”?

Today, when that planet’s great lung that is the Amazon, burns uncontrollably, many surely recall Fidel’s words. His irrefutable arguments. How can it be explained that the current President of Brazil, Jair Bolsonaro, during the first 20 days of the raging fires, was blaming the disaster on people “attempting to undermine his authority,” or “stealing the presidency,” launching unfounded attacks on NGOs he accused of starting the fire, according to a BBC release.

Scientific research shows that the indiscriminate felling of the Amazon rainforest has led to deforestation that reduces the level of local rainfall. The forest becomes drier, and in turn more flammable.

It is totally irresponsible that, when all of humanity is impacted, no effort was made to fight the fire for the first 20 days, causing one of the most devastating ecological disasters in history.

I return to Fidel and his speech at the Earth Summit, when he said:

Consumer societies are fundamentally responsible for the atrocious destruction of the environment.

Forests disappear, deserts grow, billions of tons of fertile soil is washed to the sea every year. Numerous species become extinct. Population pressure and poverty lead to desperate efforts to survive even at the expense of nature. It is not possible to blame this on Third World countries, colonies yesterday, nations exploited and looted today by an unjust world economic order.

Many things have happened since the 1992 Earth Summit. Seminars, workshops, unfulfilled commitments… money that never appeared to help poor countries address the effects of climate change.

And then the Paris Summit arrived, November 30, 2015 through December 12. An agreement was drafted and approved by almost 200 heads of state or government, who made a commitment to save humanity from the harm caused by climate change.

It seemed that among the attendees and signatories, Fidel was present, that his words echoed in the ears and the consciences of those who were responsible for “saving the human species” because “tomorrow will be too late.”

But life went on and two years later, in 2017, the world learned what the new President of the United States was willing to do, as he withdrew from major international agreements and conventions achieved through years of discussion, dialogue, and mutual understanding.

Trump, in one of his first actions as President, broke with the Paris Agreement. He described climate change as a lie, and looked for the nearest trash can to throw the document signed by his predecessor, Barack Obama.

Fidel’s visionary 1992 statement that “we are becoming aware of this problem when it is almost too late to stop it,” does not appear to be understood by this man, who from his imperial throne ignores the Paris Agreement and many others critical for peace and human life on the planet.

Now, Brazilian President Jair Bolsonaro–the Trump of the Tropics–wants to imitate him and withdraw from the Paris Agreement, as well, and ignore the impact of climate change.

While the Amazon burns, and some regions of the world prepare for war, in which seas and straits may also catch fire.