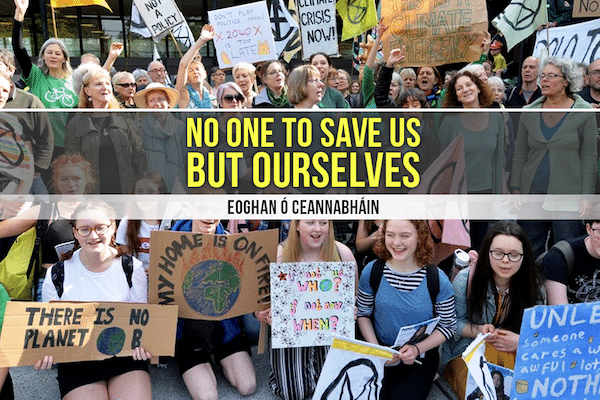 Ahead of the September 20 Climate Strike, Eoghan Ó’Ceannabháin breaks down the failings of the far right and the liberal establishment in tackling global climate change.

The 2018 report from the International Panel on Climate Change gave us 12 years to cut global emissions in half, propelling the issue of Climate Emergency into the public eye in a manner hitherto unprecedented. The consequences of ongoing environmental disaster had been apparent for some time, particularly in parts of the global south, but the IPCC report has proved to be a catalyst for movements like Extinction Rebellion and the School Strikes for Climate, which have further forced environmental issues into mainstream discourse.

But almost a year after the report was issued, the question must be asked: What have the world’s governments done to confront the imminent catastrophe we are facing? What drastic action has been taken? Who has taken the lead on this?

And the stark answer is: absolutely nothing. None of the major industrialised countries are anywhere close to meeting their targets for emission reductions. Rather, global emissions are rising instead of falling. While millions of ordinary people all over the world have been galvanised, and are demanding action to deal with the Climate Emergency, we’ve seen nothing from the world’s leaders which would even slightly mitigate against the disaster.

There have been two distinct kinds of strategies taken to politically manage the situation without fundamentally tackling the environmental crisis itself. The first is the hard right response epitomised by Donald Trump in the United States and Jair Bolsonaro in Brazil: double down on the destructive policies that brought us to the brink in the first place, deny the existence of climate change or minimise the role of human activity in bringing it about, target minorities, close borders and energise a hard right base.

This strategy naturally presents an immediate threat to much of life on this planet. The activities of loggers and Brazilian agribusiness in the Amazon rainforest are causing deforestation at an astonishing rate, with an area the size of a football pitch being cleared every minute. Penalties for illegal logging and burning have been significantly reduced by the Bolsonaro government. This amounts to an invitation to lay waste to the lungs of the planet which produce 20% of the world’s oxygen. Bolsonaro is unapologetically forging ahead with this policy, denying that deforestation is taking place, stating that “the Amazon is ours” and claiming that he is “fulfilling a mission from God”.

The profits of climate crisis

In the United States, meanwhile, Trump’s decision to pull out of the Paris Climate Agreement in June 2017 made clear that any pretence of dealing with the Climate Emergency was to be abandoned. Instead, the Trump administration strategy has been to engage in an extreme form of disaster capitalism—seeking business opportunities wherever they arise out of the catastrophe.

In May of this year, for example, US Secretary of State Mike Pompeo said that the melting of the Arctic sea ice was “opening new passageways and new opportunities for trade.” He went on to mention the possibilities for oil and gas exploration as well as exploiting the “abundance of uranium, rare earth minerals, gold, diamonds, and millions of square miles of untapped resources, fisheries galore”.

The intended course is clear for the world’s far right leaders—continue the hyper extraction of the planet’s natural resources and deny that the destruction is taking place, while profiting directly from it; ramp up racism and xenophobia, build walls and fences and let the refugees die at the gates; let the planet burn, for the rich live on the hill and will to use the wealth we have created to protect themselves. In fact, security agencies like Pinkerton, the descendents of the old strike-breaking mob, are now offering protection packages to the world’s elites to guard against the dangers of societal breakdown caused by environmental catastrophe.

The far right strategy is chilling. But what is the alternative provided by the liberal wing of the world’s ruling class?

The second alternative is more subtle. It involves endorsing the science and putting on a facade that the situation is being taken seriously, and in some cases even declaring a Climate Emergency, as has been done in Ireland and the UK. The public is reassured that this is a priority and that drastic steps are being taken to reduce the nation’s emissions.

When we look at what is actually being done, it becomes apparent that the measures taken are totally inadequate and that the train is speeding up rather than slowing down.

In the case of the Republic of Ireland, a licence to drill off the coast of Kerry was granted mere days after the declaration of a Climate Emergency. The government has undemocratically blocked People Before Profit’s Climate Emergency Measures Bill which would ban any new fossil fuel exploration licences. They continue to support the building of Shannon LNG (Liquified Natural Gas Terminal) which will bring in fracked gas from North America and lock us into a fossil fuel future for decades to come. The Irish government’s Climate Action Plan set out pitiful targets of 2% reductions in emissions every year until 2030—targets that they won’t even meet because they intend to expand the national dairy herd and double electricity usage during this time.

Moreover, the latest PR exercise by Leo Varadkar’s government is to declare they will be planting 440 million trees over the next 20 years to offset our carbon emissions. However, on inspection, one finds that 70% of these will be conifers, such as sitka spruce, which are highly inefficient in sequestering carbon and are a disaster for biodiversity. They are the preferred choice because they grow quickly and therefore can be harvested sooner and sold—the move is therefore primarily about profit-making, not protecting the environment.

To add insult to injury, Minister for Transport Shane Ross has recently taken to trolling the nation with his new electric car, urging the public to dig deep and follow his lead, goading other TDs for not making the switch. Much was made of the fact that one of Ross’ PR stunts involved pretending to charge his new purchase at a charging station that was not yet operational, but what was missing from the mainstream discourse was any discussion of the government’s ludicrous plan to put nearly 1 million electric vehicles on the road by 2030.

The reality is that even if this were possible and affordable, it is simply not a sustainable method for lowering transport emissions. The amount of raw materials involved in constructing these cars would be enormous, as well as the energy required to run them. Yet when it comes to the major investment in public transport required to get people out of their cars, Ross and his Fine Gael colleagues are sitting on their hands.

Around the world, liberal inaction on the Climate Emergency is similar. There is a refusal to accept the kind of overhaul of the economic system required to put a halt to the 6th mass extinction. Instead, the establishment kicks the can down the road and seeks a technocratic fix that will not challenge the status quo.

Too late for tech

This attitude is embodied in the assumption that carbon capture technologies which sequester carbon from the atmosphere will be developed in time to avoid tipping points that trigger runaway global warming. The idea that these technologies may be used in the near future is being promoted by fossil fuel companies wishing to protect their profits. It was revealed recently that these same companies such as Shell and BP are actually planning for a 4°c rise in global temperatures—much above the 1.5°c warming which scientists say may prevent the very worst of the catastrophe.

The reality of carbon capture technology is that it does not exist and is highly unlikely to be developed on the scale required before the time is up, yet many of the predictive models used by the IPCC account for the technology being developed and mitigating against global warming. This is one of the reasons that the report actually now appears to be quite conservative in its outlook—the evidence suggests that warming is happening significantly faster than predicted.

There is, of course, a proven way to sequester carbon from the atmosphere through the use of broadleaf trees, but the action required to protect the world’s existing rainforests and to plant more broadleaf trees on the necessary scale is simply not happening.

A dangerous dynamic has also developed between the two wings of the global elites. The liberal elites attempt to garner public favour by placing themselves in opposition to the likes of Trump and Bolsonaro.

After the unprecedented fires in the Amazon rainforest, French president Emmanuel Macron tweeted “our house is burning” and called for the issue to be discussed at the upcoming G7 summit. There was no mention of the fact that Macron is supporting the EU-Mercosur deal which incentivises Brazilian agribusiness to clear the land in order to farm beef that will be sold to Europe.

Likewise, Canada’s Justin Trudeau pitched in to tweet “We need to #ActForTheAmazon & act for our planet”with no mention how he has allowed the dirtiest kind of fracking to go ahead in the Alberta Tar Sands and has repeatedly railroaded pipelines through indigenous peoples’ land.

While the existence of the far right climate deniers grants an opportunity for Liberal pearl clutching, the hypocrisy of the centrists is ammunition for the far right. Bolsonaro responded to Macron and Trudeau by pointing out their own states’ failure to protect the environment. In addition, the carbon taxes frequently promoted by many of the world’s governments are pounced upon by the far right, many of whom claim climate change is a hoax to get people to pay more taxes. There is a real danger that this strategy could promote climate change skepticism at a crucial period when the movements to take on the status quo urgently need to be built.

If the far right are determined to drive us off the edge of a cliff and the political centre is engaged in a window dressing exercise, what is the hope, then, for humanity and the planet?

The reality is that there are no saviours to swoop in at the 11th hour. The political establishment has proven over the last 30 years that it is utterly incapable of tackling this crisis. The only hope we have is to build up the power of mass movements of ordinary people, workers, school kids and parents that can challenge the establishment and implement the kind of system that runs sustainably, equally, and looks after people’s needs.

In this, the upcoming Global Climate Strike on 20 September is a crucial milestone. A strong showing globally from school students and workers united could prove to be an important springboard for the global environmental movement—a movement that has promise, but that urgently needs to grow and become more organised if we are to be successful.

The only ones who can save us from climate breakdown are ourselves.