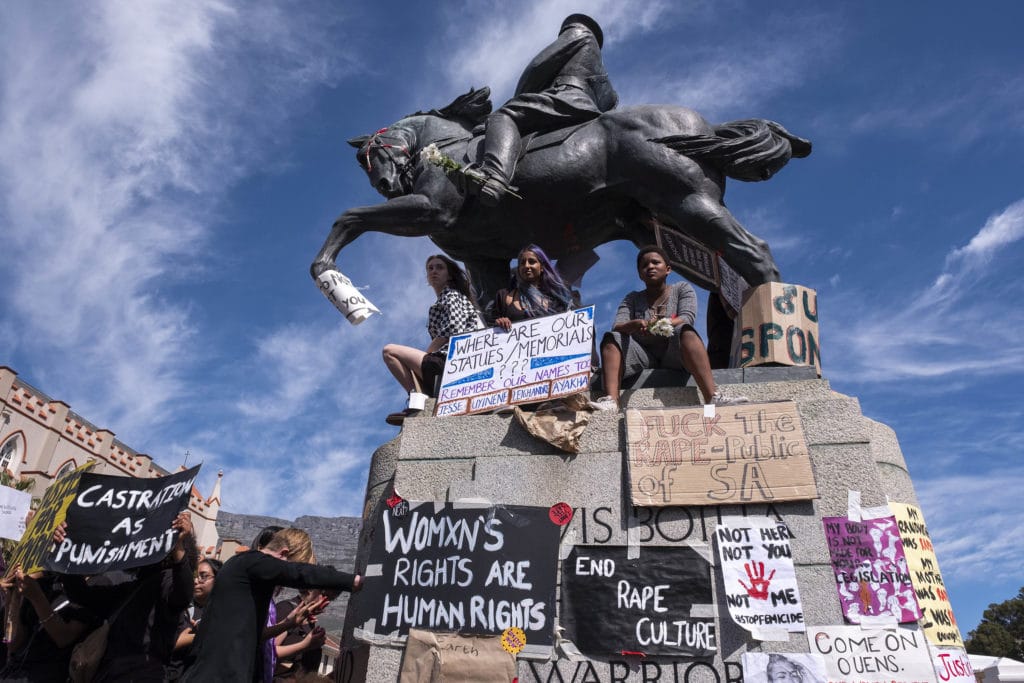 Protesters used the statue of Louis Botha outside Parliament in Cape Town as a vantage point and a pinboard for posters and placards (Photo: Barry Christianson, New Frame). September, 5, 2019. 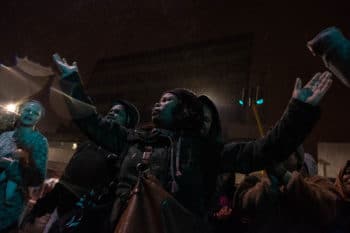 Residents marched to the Woodstock Police Station on July 30, 2019 to demand an explanation for why the raid took place and why it was done with such extreme brutality. Photographer: Barry Christianson.

Over the past several weeks, groups of angry people in some of South Africa’s poorest areas have been attacking the small spaza, or convenience stores, in their own neighbourhoods. The mood of the attacks has been utterly xenophobic, since the owners or workers at these spaza stores are mainly seen as foreigners. The workers and owners come from as far off as Bangladesh and as close by as Zimbabwe. It took South Africa’s President Cyril Ramaphosa weeks to respond to the violence. ‘There can be no excuse for the attacks on the homes and businesses of foreign nationals, just as there can be no excuse for xenophobia or any other form of intolerance’, he said on 5 September.

Such xenophobic attacks are not new. There is a living memory that traces them back to 1994. But this current cycle began in 2008 when the shock waves of the global credit crisis hit the end of the African continent with significant force. A million jobs were lost, and the unemployment rate went above 25% (it is now at 29%). There has been no recovery since that time, with these xenophobic attacks emerging every once in a while, such as last year, as an indicator of the economic and social malaise. To get the full context for this violence, please read Sisonke Msimang’s ‘Belonging’ from 2014. 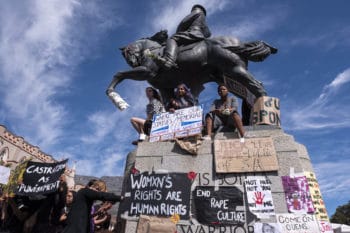 Protesters used the statue of Louis Botha outside Parliament in Cape Town as a vantage point and a pinboard for posters and placards (Photo: Barry Christianson, New Frame). September, 5, 2019.

Bhayiza Miya of the Thembelihle Crisis Committee told Jan Bornman of New Frame that the key factors at play are unemployment, poverty, and political toxicity. ‘Our brothers and sisters from other countries aren’t responsible for that’, he said of these three factors. ‘They are living with us in our community’. Bhayiza explained that it is not migrants who have been elected to exercise power over the communities; rather, the fault lies with those who ‘[w]e have voted people into power, those who are stealing from us today. So whatever frustration or whatever anger we want to vent, we vent it to them because they are the ones holding whatever we want’. Bhayiza’s comments go against the tidal wave of racism, a replication of older racism – as the University of Cape Town student Ivan Katsere writes – ‘which has been made possible by the inability to dismantle the structure that was created during apartheid’.

The xenophobic violence is not authored by other poor people alone, but also by the police. Harsh police raids in early August against traders in counterfeit goods – many of them vulnerable migrants – sets the tone for the xenophobic attacks. The murder of a taxi driver in South Africa’s capital Pretoria led to accusations against drug dealers, who were once more characterised as foreign nationals.

The xenophobic violence comes as part of a chain of violence, and protests against the violence. Every three hours (according to South African police numbers), a woman is killed in South Africa. Recently, a student from the University of Cape Town Uyinene Mrwetyana was raped and murdered. From students to mine workers, women took to the streets to protest the violence against them. It is no surprise that in the midst of all this churning, it is women such as Celeste Cameron and Nathalie van Rooyen that form groups to protect the spaza shops. We are gatvol – fed up – said Cameron. The idea of ‘enough is enough’ resonates against the xenophobic violence and the patriarchal violence. 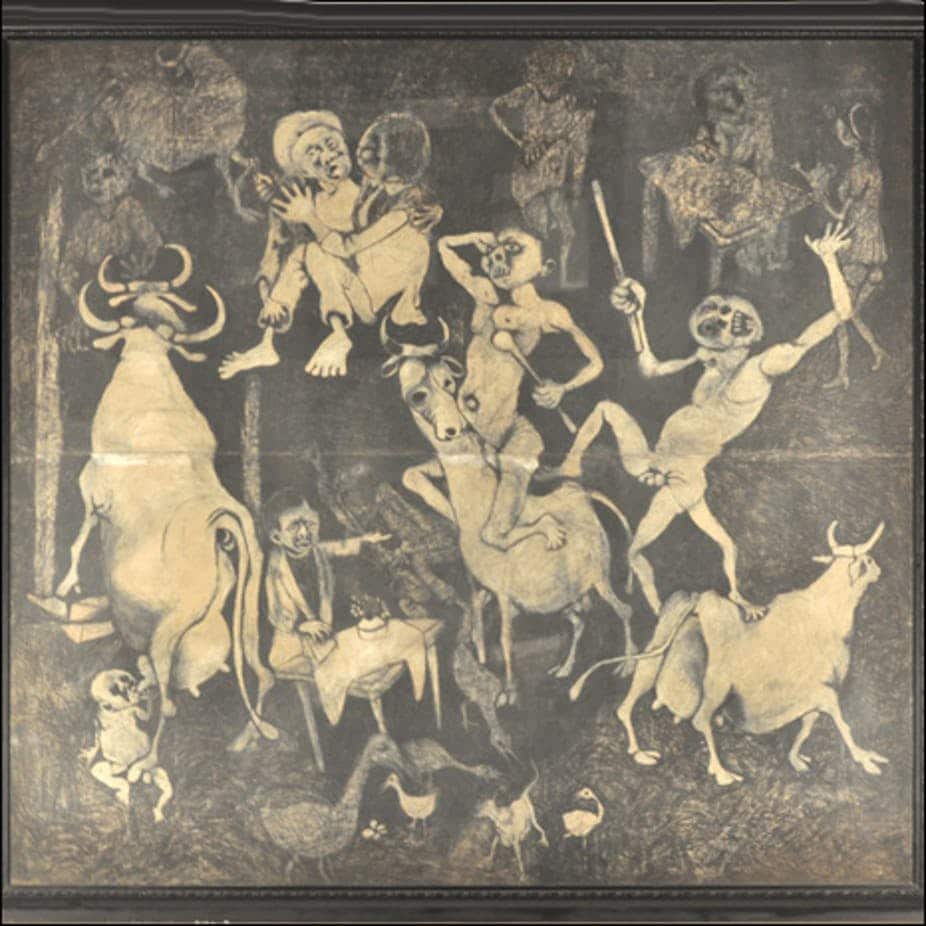 In his last State of the Union Address, President Ramaphosa accepted that South Africa needs ‘radical economic transformation’. But there is none on the horizon. His Finance Minister, Tito Mboweni, who was once a Labour Minister, has drifted into the world of IMFundamentalism. Statements of ‘fiscal prudence’ do not offer any hope of ‘radical transformation’. This is classic IMF stuff – budgets that shield the wealthy from taxation and that carve away social welfare projects for the poor. As Michael Nassen Smith of the Institute for African Alternatives puts it, ‘we will enter into a depressing annual cyclical loop: the economy slows, the fiscal belt tightens, the economy slows further, and the belt tightens, and so on, with the poor and the vulnerable shouldering the costs’. In other words, the costs are shouldered by one part of the vulnerable who get poorer and poorer, and then angrily turn on another part of the vulnerable, namely the spaza shop workers.

Bhayiza Miya’s comment about theft is appropriate here. A Report of the High-Level Panel on Illicit Financial Flows from Africa (2018) found that at a minimum $50 billion left the continent per year. This included trade mis-pricing and base erosion, false invoicing, and hawala transactions. The panel, chaired by South Africa’s former President Thabo Mbeki, said that the actual amount lost is ‘likely to exceed $50 billion by a significant amount’. A large part of this money leaks out from South Africa. Both this kind of fraud and the quotidian extraction of surplus value from workers produce the harsh inequality in South Africa. Fingers are not pointed in that direction. They are misdirected towards vulnerable spaza shop workers. It is these shops that are burnt down, while the quiet theft of capitalism proceeds unchallenged. 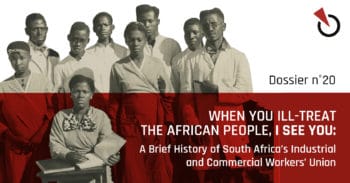 Tricontinental Dossier no. 20, When You Ill-Treat the African People, I See You: A Brief History of South Africa’s Industrial and Commercial Workers’ Union (1919-1931).

A hundred years ago, workers across South Africa joined together to form the Industrial and Commercial Workers’ Union (ICU). Soon, tens of thousands of workers flocked to the ICU for its militancy and its steadiness. The workers appreciated the internationalism of the union, which spread outside the boundaries of South Africa into neighbouring African states. J. T. Gumede visited the USSR and was taken – as we write in our latest dossier – ‘with the Soviet attempt to transcend ethnic nationalism’. The revolutionary motion of the ICU is not to turn the strife in the country into race war. ‘Today the Black man and the poor White man are oppressed’, Gumede told an ICU gathering in Durban. ‘The money goes to the Capitalists. Work together for the National Independence of this country’.

The title of our Dossier no. 20 is When You Ill-Treat the African People, I See You: A Brief History of South Africa’s Industrial and Commercial Workers’ Union (1919-1931). The first part of the title comes from an interview given by ICU leader Jason Jingoes in 1927. He takes the initials of the union – ICU – and gives it a fuller meaning – if the workers are not paid, then I see you (ICU); if the workers are mistreated in public spaces, then I see you.

The second part of the title indicates the importance of histories of workers and their organisations. These histories have been largely erased or neutered, forgotten completely or treated as a benign part of the past. There is little comprehension of how the fights of these workers produced a historical dynamic that led to the end of apartheid in South Africa, and how they produced traditions of dignity that last till this day. It is these organisations – such as the ICU – that fought hard to create a socialist consciousness against the cheap trap of ethnic nationalism. There would be no victory for the South African people against apartheid if not for their hard struggle – which includes the struggle of ethnic minorities and of the neighbouring states which provided the South African fighters with bases and logistical support. To now reduce the imagination in South Africa to xenophobia is a tragedy against history.

South Africa’s anti-apartheid movement was profoundly shaped by its working class and its trade unions. Amongst the many hundreds of thousands of workers and unionists is Emma Mashinini, whose autobiography gives us the title of this newsletter. At fourteen, Emma went to work at a garment factory, where she quickly become a union organiser. She was in the leadership of the National Union of Clothing Workers and of the South African Commercial, Catering, and Allied Workers. When she realised that her garment factory was making police uniforms ‘for the slaughter of my people, I felt horrified’. Union organising, she argued, had to be broadly political. Emma was in the tradition of the ICU, a political union with a broad horizon for social transformation.

In 1981, Emma was arrested and held without charge under the 1967 Terrorism Act. ‘In prison you are concerned about everything’, she later said. ‘You kill yourself about being there’, away from the struggle, suffocated. 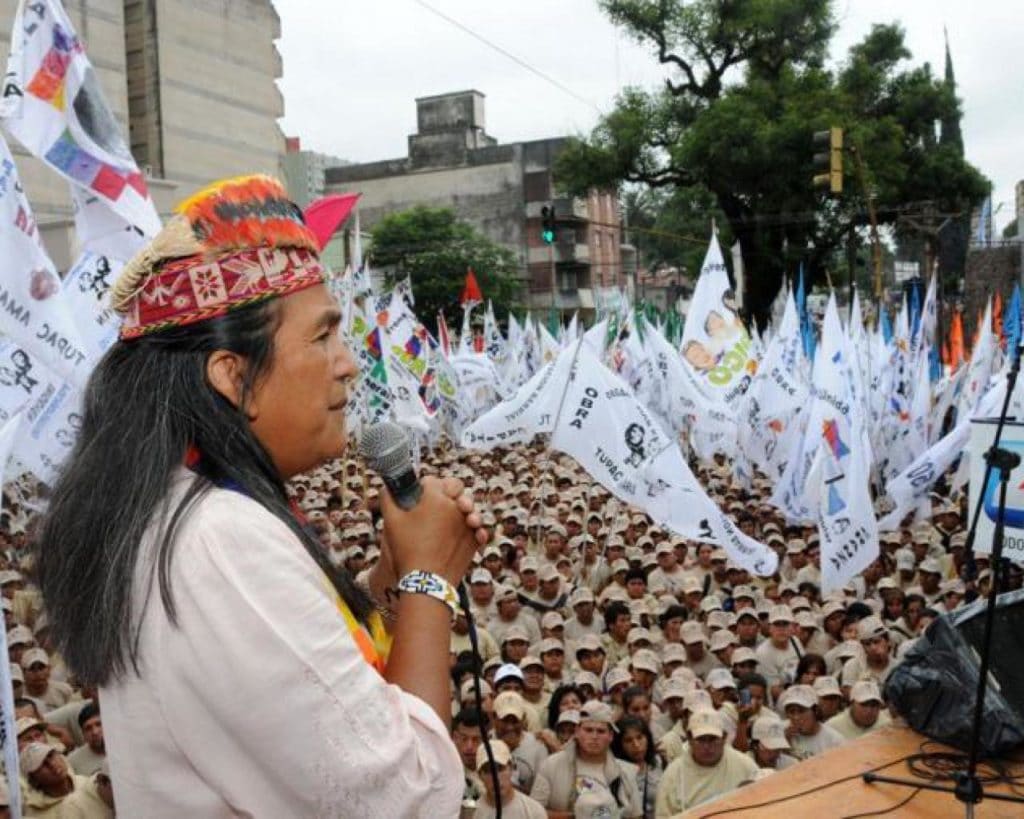 Last week, I interviewed Elizabeth Gómez Alcorta, the lawyer of Milagro Sala. Sala, an indigenous Argentinian woman, was arrested in 2013, spent time in prison under pre-trial detention, and is now under house arrest. She is the leader of the Túpac Amaru Neighbourhood Association and is a major political figure in Argentina’s left. Gómez Alcorta told me that, ever since Sala’s arrest, there has been no real militant activity from her association. The chilling power of State repression should not be underestimated. It is what Emma worried about, and it is what Sala experiences. The attack on the indigenous – whether the Mapuche in Patagonia or Sala in Jujuy – Gómez Alcorta said, is a ‘war against those who do not exist’.

Gómez Alcorta says that Sala remains an emblem of struggle for four reasons. First, she has been moved from pre-trial detention in the prison to her home. Second, she remains alive – not an inconsequential matter when you consider the assassinations of so many militants (from Santiago Maldonado to Rafael Nahuel). Third, the government went after the Túpac Amaru association and its members, destroying eight thousand houses, three schools, and a health centre. This level of repression has not dented the feeling amongst the community in Jujuy that Sala is their leader. Fourth, the case has not disappeared. Posters and drawings of Sala can be seen across Argentina. Free Milagro (Liberen a Milagro) say the signs.

‘The story of Milagro Sala is not finished’, says Gómez Alcorta. When she is released, Milagro Sala will emerge once more as the leader of her region and now – because of the case – as a symbol of the fight against the old order. It would be a tremendous thing if Milagro Sala – an indigenous woman – could ascend from her prison to the heights of Argentina’s political world.

Strikes have followed Sala all her life, as they followed Emma Mashinini. These are militants who understand that social divisions favour the wealthy, while social unity favours the poor. Those fires in the South African spazas mirror the attacks on the houses, schools, and health centres in Milagro Sala’s Jujuy province. Tears are not enough to put these fires out.