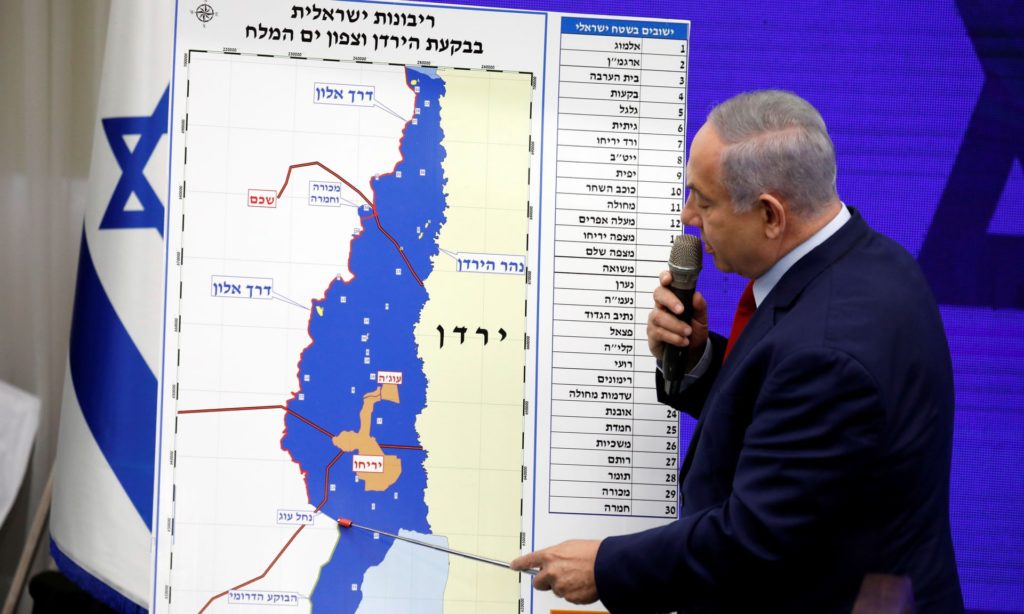 Israeli prime minister Benjamin Netanyahu announced on September 10 that if he is re-elected, he will annex all the settlements in the West Bank, starting with the Jordan Valley and the northern Dead Sea. This marks a significant step in what has been a gradual policy of taking over Palestinian land and destroying any possibilities of a Palestinian state.

The Jordan Valley and the Dead Sea are part of the Occupied West Bank under Israeli control since 1967. It stretches over 2,400 square kms and comprises around 22% of the entire West Bank. Nearly 65,000 Palestinians live in this area which falls under Area C as per the Oslo Peace accords. In the past few decades, Israel has built several illegal settlements in the area where around 11,000 settlers reside.

The Jordan Valley is crucial for both the Palestinian state and Israel. Israel sees the valley as an important source of freshwater. The valley also forms the border with Jordan and therefore, during the Oslo accords negotiation, Israel was unwilling to transfer its control to the Palestinian Authority. Israel has insisted in the past that it would retain its military in the valley even if a Palestinian state were to be set up in the West Bank.

The Palestinians and international organizations do not accept Israeli claims over the valley and consider it to be part of a future Palestinian state.

There have been mixed responses to Netanyahu’s statement which has come ahead of the September 17 elections. He had made similar claims before the April election and observers have pointed out that the announcement is probably meant to ward off the challenge from the Blue and White alliance led by former general Benny Gantz. The Blue and White alliance too shares the view that the Jordan valley should be part of Israel.

Sensing his vulnerability after over a decade in power and corruption charges, Netanyahu has adopted an extremely hawkish posture in recent times. He deliberately escalated tensions with Hezbollah in Lebanon by carrying out several drone attacks in the past few weeks. This had almost created a war-like situation. Netanyahu also attacked Iraq for the first time since 1980. Israel has been involved in several air and drone strikes inside Syria in the last few months, supposedly against the alleged Iranian attempts to aid and support anti-Israeli forces in the region. All these aggressive postures are intended to appeal to hard-core Zionist voters in Israel and boost the prospects of Likud.

But this announcement also has larger ramifications. Netanyahu has already shown he does not care about international laws or concerns raised by the global community when it comes to pursuing his hegemonic policies. He has the backing of US president Donald Trump who recently recognized Israeli sovereignty over the occupied Golan Heights. Earlier, Trump had reversed decades-old US policy on Jerusalem and the US became the first country to recognize it as the capital of Israel. While making the announcement, Netanyahu announced that he was already coordinating the annexation with Trump administration.

Under Netanyahu, the number of settlements too has gone up several times. The “leaked” parts of the Trump’s so-called Deal of the Century have virtually legalized Israeli occupation.

Several regional players, including the Arab League and Saudi Arabia, criticized Netanyahu’s statement. Mahmoud Abbas, the president of Palestinian Authority, warned that all agreements signed so far with Israel will become null and void if Netanyahu carried on with the plan. Prime minister Mohammad Shtayyeh said that “Palestinian territories are not part of Netanyahu’s election campaign” according to an Al Jazeera report.