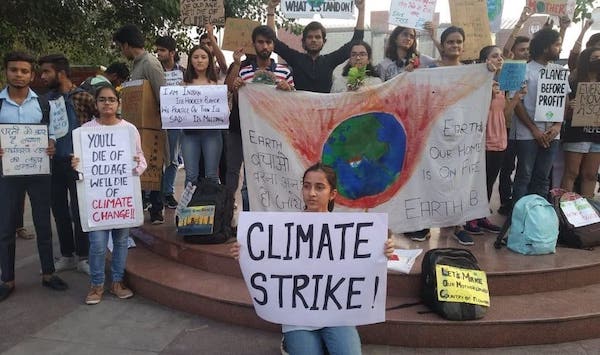 Last week, some of the headlines in the world media were dominated by climate strike call given by the students under the slogan of “ Friday for the Future”. Led by Greta Thunberg this event attracted worldwide attention. The New York Times wrote; “Lessons of the Day: ‘Protesting Climate Change, Young People Take to Streets in a Global Strike”, The Guardian’s headlines was “Global climate strike: Greta Thunberg and school students lead climate crisis protest-millions of people from Sydney to Manila, Dhaka to London and New York are marching for urgent action on climate breakdown”, similarly Financial Times made the headline “Climate strike: ‘Change is coming whether you like it or not’, Protesters have demonstrated on Friday in marches spanning from Asia to Africa, Australia , Europe and across the United States to call for action on climate change”. Even the Washington Post carried a similar story, “We will make them hear us’: Millions of youths around the world strike for action”.

The strike was observed in India as well, though not in that large numbers as it occurred in other parts of the globe. Some of the Indian cities like Delhi, Mumbai, Bengaluru and Kolkata, among the bigger cities staged impressive marches. There was a strike call given by SFI, one of the largest left students organisation in India. There is widespread churning going on among the students for acting against the threats of climate change. 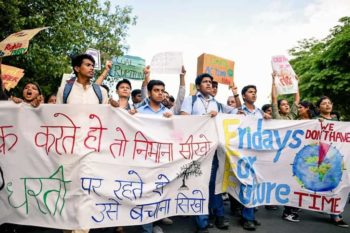 Whereas there has been a general acceptance of the demands of the movement for climate strike there also has been criticism and scepticism expressed by some of the groups and individuals who view it with cynicism, term it as ‘elite propaganda’ of the West that does not take into consideration the actual demands of the third world people and those of the least developed countries. According to them instead of a climate strike there should have been a ‘development strike’, which is urgently required in a developing world like India and other South Asian countries. Since some of these groups and individuals who have formed this criticism come from a democratic and left background it is pertinent that the issue is dealt in perspective.

Whereas there are no two opinions about the urgent need to act on the climate crisis engulfing the world. The point is how it should be done? I shall try to comment on it in later paras. For now, let us understand how large the issue is. Not just to quote from various IPCC (Inter-governmental panel on climate change) reports that time is running out, there are several other phenomenon that point towards the urgency to act. ‘Anatomy of a silent crisis’, is a comprehensive report prepared by the Global Humanitarian Forum. It deals with the challenges that the earth and humankind face in the contemporary times of climate change.

The findings of the report indicate that every year climate change leaves over 300,000 people dead, 325 million people seriously affected, and economic losses of US$125 billion. Four billion people are vulnerable, and 500 million people are at extreme risk. matter of the report. These already alarming figures may prove too conservative. Weather-related disasters alone cause significant economic losses. Over the past five years this toll has gone as high as $230 billion, with several years around $100 billion and a single year around $50 billion. Such disasters have increased in frequency and severity over the past 30 years in part due to climate change. Over and above these costs are impacts on health, water supply and other shocks not taken into account. Some would say that the worst years are not representative and they may not be. But scientists expect that years like these will be repeated more often in the near future. 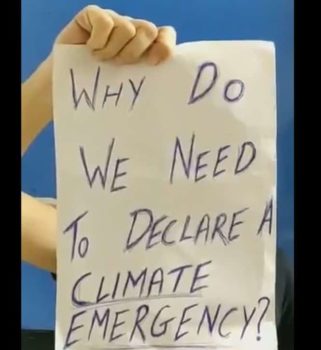 The report also summarises the impact of climate change on different parts of the world and how it is linked to the whole issue of global justice. Developing countries bear over nine-tenths of the climate change burden: 98 per cent of the seriously affected and 99 per cent of all deaths from weather-related disasters, along with over 90 per cent of the total economic losses. The 50 Least Developed Countries contribute less than 1 per cent of global carbon emissions. Climate change exacerbates existing inequalities faced by vulnerable groups particularly women, children and the elderly. The consequences of climate change and poverty are not distributed uniformly within communities. Individual and social factors determine vulnerability and capacity to adapt to the effects of climate change. Women account for two-thirds of the world’s poor and comprise about seven in ten agricultural workers. Women and children are disproportionately represented among people displaced by extreme weather events and other climate shocks. The poorest are hardest hit, but the human impact of climate change is a global issue. This brings us to the same argument as advocated by some of the groups that the developing world which has not much contribution to the crisis; why should it join such strikes?

The developed countries cannot negate their `historical responsibility’ and continue with their pillage of global climate at the expense of the vast majority of humanity. They need to be forced to continue to accept per capita emissions as the basis of energy equality as every human being on the planet, should have equal access to carbon space. Such inequality–per capita emissions in USA are 20 times greater than per capita emissions in India–cannot be allowed to persist. But there is this dilemma that those who are responsible for the havoc have little role to play in it; at the same time cannot evade from the responsibility. Responsibility to fight the climate injustice and also to ensure that the carbon footprint is reduced.

TO BE OR NOT TO BE 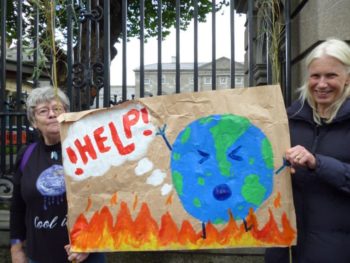 From the  Hamlet, the  dilemma continues:

To be or not to be: that is the question:

Whether `tis nobler in the mind to suffer

The slings and arrows of outrageous fortunes,

Or to take arms against the sea of troubles,

And by opposing end them?

Unlike in the play, humanity can ill afford the tragic end in the hope of an eternal reunion in an ethereal world. Mortals need a just equitable deal. In fact this phrase was quoted by Sitaram Yechury, the then Member of Parliament(Rajya Sabha) in the Copenhagen Summit on climate change in December 2009, where he was an official delegate of the Indian government. Hence the question is ‘not to be’, at all. It has ‘to be’, and the basis for that ‘to be’ is an equitable share of sustainability which every country, community, individual must get. From the climate change perspective, the extension of the UNFCCC(United Nations Framework Convention on Climate Change) to Kyoto Protocol signed in 1997 laid the foundation of it. The foundation laid on the basic principle of “common but differential responsibility”. Article 4 para 7 of the UNFCC,

commitments under the convention will depend on the effective implementation by developed country parties of their commitments under the Convention relating to financial resources and transfer of technology and will take fully into account that economic and social development and poverty eradication are the first and overriding priorities of the developing country parties.

However, since the protocol was established the developed world has not reduced its emissions and continue to harp on the dangerous path. Instead of reducing its emission by more than 5 per cent the increase in emissions has taken place by 15 per cent. The US, EPA department exhibits figures of increase of carbon emissions by 7 per cent since 1990(remember its per capita carbon footprint is the highest in the world).

Since COP 21 at France, 100 billion dollars were to be transferred to the developing world, however not even 50 per cent of it has been achieved.

There has to be a consistent struggle of climate justice to ensure that these demands are met with. Hence the question of not to be does not arise. It has to “to be” and how that has to be built should depend on the concrete conditions prevailing in respective countries.

To criticise students for not getting the above demands implemented or since these demands have not been implemented is rather too unjustified. This criticism has been from various quarters. Progressive and democratic groups pointed out the missing question of climate justice whereas other groups pointed out the failure of the left to grapple with climate question as its(left) ideology is too deterministic and based on the ‘unleashing of productive forces’ only. Which in ordinary terms for them mean maximum exploitation of natural resources and earth. Let us deal it in perspective. 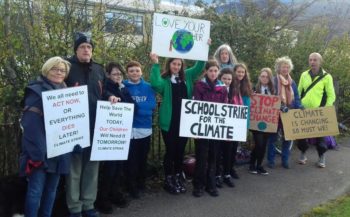 ‘The Karl Marx’, chosen to be a thinker of the millennium is considered to be too economic determinist, but rarely it is informed that his theorem for struggle against injustice=humanism=naturalism. A recent book on Marx’s ecology written by Kohei Saito elucidates some of Marx’s important interventions.

The 1844 notebooks of Marx contain Marx’s early recognition of the strategic importance of reestablishing a conscious “unity” between humans and nature as a central task of communist society. If Marx was later able to conceptualize environmental destruction as an immanent contradiction of capitalism, his ecological critique in Capital partially originates from his earlier insight into the modern disunion of the human-nature relationship.

The young Marx formulated the unity between humanity and nature in the future society as the idea of fully developed “humanism=naturalism,” a conception that Marx retained even after various later modifications of his own theory.

Marx points to a great historical transformation of the human-nature relationship underlying the estrangement of modern labour, as a result of which the activity of workers can no longer function as the subjective realisation of the free and conscious capability of human beings in and with nature. Human beings are reduced to “wage labourers”, who are dependent on capital for the sake of their own physical lives; and accordingly, their entire activity is minimised into wage labour. Without correctly understanding the fundamental cause of alienation, it is not possible to recognise Marx’s vision of transcending it. Only if one comprehends the estrangement in capitalist society as a dissolution of humans’ original unity with the earth does it becomes evident that Marx’s communist project consistently aims at a conscious rehabilitation of the unity between humans and nature.

For Marx the idea of humanism was intricately linked to naturalism and hence the possession of earth and its plunder by capitalism was profoundly explained.

This idea builds the core of “humanism=naturalism,” as Marx was already aware of the task of realising free individuality in the future society, using the concept of “association”: Association applied to land, shares the economic advantage of large scale landed property, and first brings to realisation the original tendency inherent in [land] division, namely equality. In the same way association also reestablishes, now on a rational basis, no longer mediated by serfdom, overlordship and the silly mysticism of property, the intimate ties of man with the earth, since the earth ceases to be an object of huckstering, and through free labour and free enjoyment becomes, one more, a true personal property of man. Marx emphatically demands the reconstruction of the “intimate ties of man with earth,” now on a higher level after its destruction in capitalism.