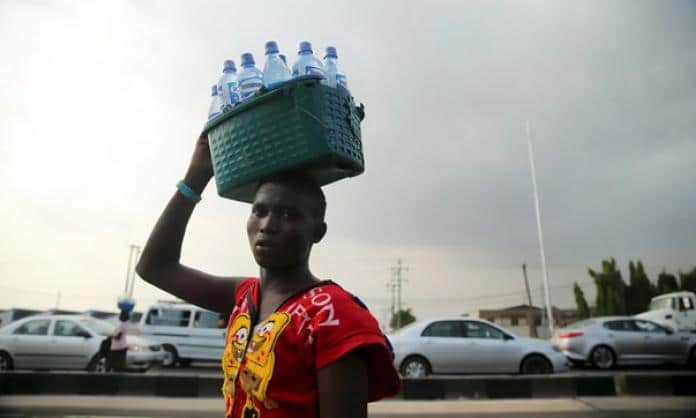 All life depends on water. It covers 71 percent of the Earth’s surface, makes up 60 percent of our bodies and literally falls from the sky. It’s abundant and indispensable. But under capitalism, even water is a tool of social domination. That is the logic of a system of class rule. Capitalism turns material abundance into socially constructed scarcity. No resource–not even water–is exempt from that violent process. Resources like water are commodified and weaponised, through the workings of the market and through state violence. The human need for water makes it a potential weapon for the ruling class.

Nigeria’s Rivers state is home to the Ogoni people, an ethnic minority in Nigeria. Their dialect has a special term for water that denotes collective ownership–reflecting that it’s seen as a resource to be shared for the benefit of humanity. But the Ogoni were forcibly removed from their traditional water sources through both long-term groundwater pollution by oil companies and state violence and privatisation in the 1990s. By 2012, the lack of drinkable water had become so severe that the Nigerian government declared a “water emergency” and was supplying rationed water to the affected communities.

“However, quantities of water supplied both during the water emergency and post-water emergency have been insufficient to prevent water scarcity”, argued a 2018 research article by Victor Ogbonnaya Okorie published in Africa Spectrum. “As a result, residents of the affected communities, including owners of the polluted wells, who were once water-sufficient, became water-insufficient and have been integrated as customers into the burgeoning water market in the region.”

The opening of new markets and potential profits presupposes dispossession and destruction of traditional forms of property, particularly collective ones. In Nigeria, the new water market needed more consumers and workers than were provided by dispossession through privatisation. Groundwater pollution provided that extra nudge by rendering the remaining collective water sources poisonous.

Ogoni activist Kenule Saro-Wiwa accused the oil companies of practising genocide against his people and led a mass movement against them. Three hundred thousand people marched against the ecological destruction. The response was repression. Saro-Wiwa was executed in 1995 by Nigeria’s military dictatorship. In his “Statement Before Execution”, Saro-Wiwa asserted that the oil companies and the military government were allies in ecological warfare against the Ogoni: “Victory is assessed by profits, and in this sense, Shell’s victory in Ogoni has been total”. Last year, Shell celebrated 60 years of operation in Nigeria.

Water privatisation and pollution were the two pillars used to force on the Ogoni a system premised on scarcity. Dr Okorie concluded: “What has eroded as the local wells turn black has been a set of social relations that were enabled by the fact that water was part of the commons and had more than monetary value”.

Imperialism and water in Palestine

Human need for water is a weapon in the service of imperialism and settler colonialism. Water can be not just a commodity, but a means of ethnic cleansing. In occupied Palestine, Israel-as-oasis is a prominent part of the state’s national mythology. The military occupation, expanding illegal settlements and apartheid are accompanied by assertions that Israel has brought life–human, animal and plant–to what was a barren, inhospitable landscape. Desolate-looking Palestinian villages are contrasted to thriving, green Israeli settlements.

Halamish, an Israeli settlement in the occupied West Bank, sits above the Palestinian village of Nabi Saleh. In the documentary Thank God It’s Friday, a Halamish resident is filmed watering her garden while boasting, “There were no birds before we came”. In reality, it’s through violent dispossession–of houses, land, resources and life–that every Israeli settlement is built, and water theft has played a key role in that dispossession. When Palestinians had access to water, their agricultural communities thrived. Israel forced Palestinians off the arable land and took it under Israeli control. Palestinian access to water is increasingly restricted as settlements continue to be built on freshly stolen land.

In Nabi Saleh, residents receive 12 hours of running water a week. In Halamish it’s provided 24 hours a day. A huge pool sits as a centrepiece in the settlement, probably filled with water from the village’s water spring that was confiscated for use by the settlement in 2009.
Nabi Saleh is under constant siege by the Israeli military, which raids homes, murders civilians and destroys water tanks on the villagers’ roofs. With villagers forced off their land to make way for the Halamish settlement, and with their water spring confiscated, the targeting of water tanks ensures that they are reliant on water provided by the Israeli state.

The village and settlement are located within Area C of the West Bank. An Al Jazeera article outlined Israel’s strategy in the area: “The lack of water and other basic services resulting from Israeli policies has created a coercive environment that often leaves Palestinians with no choice but to leave their communities in Area C, allowing Israel’s land takeover and further expansion of its settlements”.

But it’s not just Area C. Since Israel occupied the West Bank in 1967, it has instituted water-sharing agreements that force all Palestinians in the region into dependence on Israel. Palestinians have refused to sit on the Joint Water Committee–within which Israel has a veto–since 2010. Water control is a key part of Israel’s ongoing process of dispossession: hence the myth of Palestine as a water-scarce region. The West Bank is not naturally short of water. It’s bordered by the Jordan River and sits above the Mountain Aquifer. United Nations data show that Ramallah gets more rainfall than London. But Israel’s policies ensure that it’s siphoned away from Palestinians.

And it’s not just the West Bank. The 2 million Palestinians living in Gaza, the world’s biggest open-air prison, have access to virtually nothing that is not provided by Israel. The United Nations has predicted Gaza could be uninhabitable by 2020, partly due to its water crisis.
There is nothing accidental about that crisis. Where the needs of capitalism are met through imperialism and ethnic cleansing, places like Palestine are made deserts.

Water in the West

Resources are never ordered in accordance with human need under capitalism. While competition and the profit motive reign, rational planning and allocation are inconceivable. So water use is also separated from human need in wealthy places like Australia and the US.

Indigenous people in both the U.S. and Australia, more developed capitalist nations than Israel and Nigeria, have long been subject to the same brutal processes of dispossession. But capitalist forms of water management developed and spread as the commodity-based economy took control.

The most recent catalysts for that development have been neoliberalism and climate change. The neoliberal era has removed water from the mostly illusory special status offered by state ownership–where a sector or resource is seemingly shielded from market pressures–in the postwar West, while across the world the escalating climate crisis is bringing to a head tensions associated with apparent scarcity.

Some light has been shed on the scale of water management corruption in Australia this year by mass fish kills in the Murray-Darling Basin. Although the immediate cause was a toxic algae bloom, there was no hiding the social nature of the disaster: for years water has been systematically pulled from all over the basin for use by agribusiness, leaving downstream communities and the basin itself prone to crisis.

Another flash point in Australia is the Adani coal mine. The monstrous project had polluted wetlands in Queensland before it was even approved. Its operations will require billions of litres of groundwater while almost certainly polluting the Great Artesian Basin, the largest of its kind in the world. And Adani, thanks to both the federal and Queensland governments, will get its water for free. For the rest of us, the water that comes out of our taps and that we need to survive comes with a bill. What’s left after priority is given to corporations like Adani is sold to us for profit.

Meanwhile, in the US, Trump has just rolled back a mild water reform won under Obama. Regulations to the Clean Water Act established some federal oversight that would lessen the severity of local water pollution. Trump has rescinded those measures to the benefit of a range of profiteers. News reports of the changes have emphasised the differences between Trump and Obama, but they have more in common than not. While measures against some pollution were taken under Obama, his approach was simply striking a different balance than Trump.

In fact, Obama’s wars over water proved that the ongoing development of capitalism never stops targeting Indigenous populations. In 2016 the world watched battles between the Native American Sioux and their supporters and the Obama administration over the Dakota Access oil pipeline. One of the major issues was the destruction of the Standing Rock Sioux reservation’s water supply. Under Obama’s watch, the military was sent in to break up a protest camp, dubbed the “water protectors”, of more than 10,000 people. The pipeline, now built, runs for almost 2,000 kilometres. According to the Intercept, it leaked oil at least five times in 2017 alone.

Capitalism distorts our relationship with every resource, no matter its abundance or its importance to human survival. Those in charge are conscious of how the impending climate crisis affects those needs and are increasingly anxious to protect their control over resources, especially water, into the tumultuous future. Capitalists are increasingly worried both that those they’ve deprived of water will rise up against them, and that the climate catastrophe they’ve created will start to impede their business and security. A few remedies are being experimented with. Some capitalists are hiring firms of trained killers to protect them and their water supply if we come for it. Others are securing getaway strategies–like buying up remote land in New Zealand complete with the world’s freshest water sources–to wait out the apocalypse. And in the meantime, scarcity exacerbated by climate change is driving up water prices, and with them profits, everywhere.

In Nigeria, a walled city is being built off the country’s coast to shelter the rich and powerful in the event of a climate apocalypse. The project is bankrolled by the Chagoury Group. Its founder, Gilbert Chagoury, was a Nigerian billionaire and adviser to the dictatorship that murdered Kenule Saro-Wiwa. Before he was executed, Saro-Wiwa said that history would put his murderers on trial. But if left unchallenged, our enemies can wait out the climate crisis on islands or sustain their rule through violent authoritarianism. The right side of history will win only through a collective struggle to the final victory of humanity over the rule of profit. Only then can water, nature and our wealth be used for human need and not for social control.