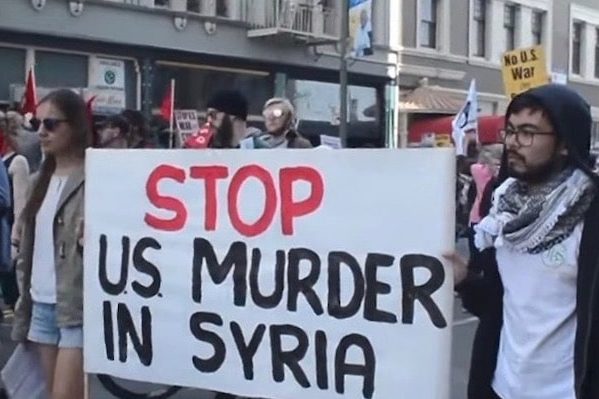 Despite so many self-defined radicals’ reading and claims to understand Gramsci’s corrective to Marxism-Leninism’s mechanistic understanding of the relationship between the base and the ideological superstructure, the ease by which some radicals are manipulated by the crude ideological machinations of the ruling class is truly astonishing. It is quite understandable that liberals would be manipulated by fairly innovative ideological gimmicks like the notion of “humanitarian intervention” and the “responsibility to protect,” which relied on the assumption, proving correct, that the liberal consciousness would react favorably to appeals to oppose “authoritarians” and authoritarian systems. However, I suspect that state propagandists didn’t realize the potential effectiveness of this ideological device when they first began to disseminate this framework for its ability to also mobilize radicals to the side of the bourgeois state and imperialist adventures.

The latest misadventures in Syria over the last few weeks revealed just how effective the bourgeois ideological apparatus has been in winning over not only liberals to support the “regime change” policies of the Obama administration in Syria, but also radicals and self-defined revolutionaries throughout the Western world.

The construction of the narrative in which street demonstrations against the Assad government would go from supposedly non-violent demonstrations to a “justifiable” call for armed struggle in a matter of weeks and gain support from Western radicals was an amazing feat.

Without rehashing the details and timeline of this sad spectacle—which resulted in millions internally displaced and as refugees, hundreds of thousands dead, the Syrian nation divided by sectarianism, and the state constricted with its territory occupied—it is, however, important to be reminded that the armed wing of the rebellion that received uncritical support from liberals and Westernized radicals was the “Free Syrian Army (FSA).”

When some of us warned Western radicals that they were being manipulated, that the so-called revolution in Syria had become fraudulent because it lacked an organic, independent social base, and was being driven by imperialist forces who cared little about democratic reforms, the working class or Syria as an independent sovereign state, we were condemned as “Assadists” and “Putin puppets.”

Expunged from acceptable discourse was any consideration of the relationship between oppressor and oppressed states, the real geostrategic and economic class and national interests in contention in Syria and the region, or the legality of intervention outside the framework of the United Nations Charter.

Instead, the hegemonic framing of Syria was driven by the convergence of a left-right, paternalistic form of white saviorism ethically legitimized by the concept of humanitarian intervention, itself constructed on the normalized belief in the superiority of  the white West, be it in its’ current capitalist form or its’  imagined socialist future. Politically, the logical stance for both versions of this Eurocentric self-delusion is that any people striving to emulate either of those Eurocentric visions should be supported.

However, in the case of Syria, that carefully constructed ideological framing is now imploding as a result of its own internal contradictions. The white supremacist “responsibility to protect,” the 21st century version of the “white man’s burden,” requires an adolescent bad guy-good guy framing. The dictator/authoritarian figure and the suffering people longing for freedom—Western style freedom that is- provided a familiar cultural framing for this epic struggle between “good” and “evil.”

In Syria, Assad was the villain and the Kurds the virtuous other who took on the savage forces of ISIS—that appeared out of nowhere according to this version of the story. While the Kurds were saving Western civilization from ISIS—and that is how it was framed because it is the only way real support is generated for non-European life (you have to be saving white folks)—the good guy revolutionaries and moderate opposition in the form of the FSA were fighting Assad to liberate the millions of people who didn’t seem to understand that they were being oppressed by Assad.

But all of that has now been turned on its head with the Trump administration’s decision to abandon the Kurds and give a greenlight to the illegal invasion of Syria by Turkey, with none other than the FSA acting as the point of the spear operating with the Turkish army to crush the Kurds.

In the anger toward Trump, the corporate press forgot the memo that the FSA were the good guys who had been supported by U.S. authorities from the very beginning of the manufactured war. The new framing became the “Turkish supported FSA,” especially after gruesome videos began to circulate that demonstrated in graphic images what many of us knew, along with the CIA and most of the honest foreign policy community, that the FSA was always al-Qaeda’s Syria operation in the form of Jabhat al-Nusra and other jihadist militias.

Independent journalist Aaron Mate, who was one of the many journalist smeared as an Assadist simply because he attempted to raise objective questions about what was unfolding in Syria and the impact of U.S. policies in the region, suggests that now that it is no longer viable to pretend that the FSA and the so-called moderate rebels ever existed, all those who smeared independent analysts on this question should apologize.

I am confident that an apology of that sort will never happen; nor do I think Aaron believes that either because arrogance and self-righteousness is so deeply ingrained into the cultural DNA of most Westerners. Similarly to how U.S. radicals desperately tried to find a revolutionary entity to support in Syria to justify their objective alignment with U.S. imperialism, they will find a way to explain away what everyone can clearly see today, that the war on the people of Syria was a monstrous crime against humanity.

Instead of apologies, real justice demands that there should be international prosecutions beginning with Obama, Clinton and all the Western leaders who perpetrated this crime.

The ideological struggle is real. It shapes consciousness and informs actions. There is no middle ground. Western radicals must take a consistent anti-imperialist position despite the internal contradictions or problems that exist within a state in the Global South. This is their task and responsibility, especially of those individuals and organizations that reside at the center of the empire.

What distinguishes the Western radical from its counterparts in the global South is the fact that Southern-based radicals understand that any nation that finds itself in the crosshairs of U.S. and Western imperialism is a nation that, in one way or another, is considered a threat to imperialist domination. It’s time Western radicals understood this as well and stopped aligning themselves with the enemies of collective humanity.

Ajamu Baraka is the national organizer of the Black Alliance for Peace and was the 2016 candidate for vice president on the Green Party ticket. Baraka serves on the Executive Committee of the U.S. Peace Council and leadership body of the United National Anti-War Coalition (UNAC). He is an editor and contributing columnist for the Black Agenda Report and contributing columnist for Counterpunch. He was recently awarded the US Peace Memorial 2019 Peace Prize and the Serena Shirm award for uncompromised integrity in journalism.

Neoliberalism, hell no!
The struggle to live in the present