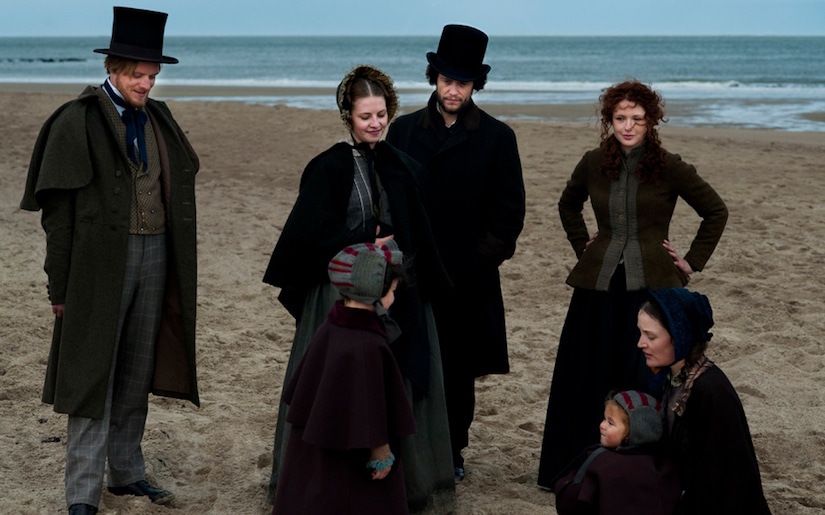 Many of my friends disliked it, and not without reason. And yet Raoul Peck’s film The Young Karl Marx seemed to me to get the essential thing right.1 I saw it as a film about the struggle to live in the present. As such, it’s a film that can help us do exactly that. The Young Karl Marx is fiction, but like all good fiction is more real than the documentary evidence on which it is based. It tells us not what actually happened, but a version of what happened with which to think what is happening now. In that sense, it is a species of realism.2 And in another sense too. It is a work of cinema. It is in Pasolini’s terms (and Barad’s also) cut from the real itself.

There are four characters: There is the young couple, Karl and Jenny Marx. There is Karl’s new best friend, Friedrich Engels, and Freddy’s new special friend, Mary Burns. Each needs the other to find their way into the present and out of the past. They are comrades in the struggle to be of their time. Jenny needs Karl to escape her genteel family, but Karl needs Jenny to guide him toward what is urgent. Fred needs Karl to most clearly write what it is they are coming to perceive in the world. Karl needs Fred because of his money. But not just that. He needs what Fred has found out about a world that is coming into existence.

Fred, the son of a mill owner, has seen the new forces of production. Fred needs Mary to discover what a textile mill owner’s son cannot see. He needs her to discover the city, to wander outside of his class. Does Mary need Fred? Well, the vulgar answer would be yes, because he is loaded. The more allegorical answer would be that the working class needs a concept of its form and its possibilities, and that may have to come from without.

The four comrades find their way to the present through a struggle with those who are struggling in the ways of the past. In Germany, the progressive bourgeois are still trying to make their revolution against the old landlord class, even as the landlord class is still in the process of putting its relation to the peasantry on a more abstract and strictly cash basis. Karl has to part ways with those who are still caught up in the task of the critique of the old ruling class and its ideology—religion.

In Paris, Karl and Jenny find what seems like a more congenial radicalism, about politics rather than religion. But it too is not quite of the present. Proudhon’s theories and Weitling’s grand speeches address the artisan rather than the factory worker. They are rooted in eternal and more or less Christian appeals to justice. They are not of their time. Fred ’s book The Condition of the Working Class in England touches on the world as it is coming into being, and that has to be the place to begin to imagine once again what the Grand Old Cause of the people might become.3 Fred gets Karl to read the English political economists. Neither German culture nor French politics is quite of the present: English economics just might be.

Fred and Karl are still genteel critics of their world, writing satirical hot takes on their elders and peers. In the movie, the link back to the world and to the present comes through Mary, the Irish mill-worker, who ushers them in to the League of the Just. These rough-handed men, who have taken their share of beatings, live by the creed All Men Are Brothers. Theirs is a vulgar and deeply felt commitment to equality. But they don’t have a program. They lack contacts. They think beyond the national but don’t have the means to make that commitment concrete.

The film’s climactic scene is one that could be loved only by those of us who have sat and stood, shouted and cursed, laughed and sang and drank our way through our share of political meetings in dusty halls, in the backs of pubs, in somebody’s kitchen. After the inevitable quibble about accreditation, Fred takes the podium and announces a new program. The League of the Just will henceforth be known as the Communist League. It is put to a vote and carries the day. Mary replaces the old rainbow banner over the window with the fresh red one as weak sun streams in behind it.

If one has lived through even a small and petty version of such events, then one knows what comes next. Having won the vote, our faction now has to write the document that embodies the will of the meeting that it is to express. Karl is procrastinating, as he does. Fred tries to convince him to put aside his day job as a precarious correspondent for foreign newspapers. The film comes almost to a close with a fantastic scene in which Fred, Karl, Jenny, and Mary get drunk and scribble lines for The Communist Manifesto by candlelight. The revolutions of 1848 are just a month away. Workers of the world unite! You have a world to win!

Peck ends his film with a montage and a Bob Dylan song. Having pushed our four comrades into the present (1848), the montage smash-cuts History to the end of the twentieth century and the becoming of this rather less appealing sequel century. The question it leaves me with is: can we be in this present as Karl and Jenny and Fred and Mary were in theirs? This time is not their time. Here the realism of the film pulls against its naturalism. The clothes, the streets, the furniture, Fred’s office and the family factory, the bar where Mary drinks with the Irish, the post office where Karl is refused a job on account of his terrible handwriting—it all feels dated and a little bit too neatly crafted. The mise-en-scène is somehow not quite right.

The naturalistic details are about a past even to our hero-comrades’ past. It is the practico-inert against which they fling themselves. Everything they say and do tries to call into being a present that all that jumble and tat pulls back into stasis and inertia. Karl is trying to write about the real yet abstract forces that warp and weft these appearances into being. Karl is trying to write about it as a present that could be open to other futures, ones not prophesized in the eternal verities of the League of the Just.

Behind the surfaces lies not eternal Capital, but something else. The whole point of our four comrades’ struggle has been to step out of finding solace once again in unseen essences. Their struggle was to live in the present. To me, that is the challenge of the film: that we have to live in our own time. This is why it is a film about young people, addressed to young people. The present of our present still needs to be written.

I took my kids to see it. I wanted them to know something of the origins and motivations of a structure of feeling that was something that I once felt deeply and to which I will remain in solidarity for the rest of my life. Let us admit, comrades, that we are a defeated people. There will be no second coming for us. And to try to remain in fidelity to something whose core myth lies in History is always to betray it anyway. The whole is to be begun again, and from the beginning.

To be an atheist is to reject the existence of God, and yet the possibility of such nonbelief is defined negatively, by the thing it knows not to be actual or possible. To be an acommunist, likewise. The a-prefix simply means without, not against. The old banner will have to come down someday, and the old manifesto put back in the archive, left to the gnawing criticism of the scholars.

What is still to be achieved is the struggle to grasp the surface effects of the present through concepts that articulate the abstract forces that produce them, forces that are not eternal and are not an essence. It can’t be done by means of words alone. Words have to connect to everyday life in all its vulgar glory and idiocy, and right at the point where the emerging forces of production are shaping that everyday life, riven perhaps by quite distinctive forms of class struggle and experience. The means to live and endure otherwise may already have come into existence, fettered though they are by outmoded relations and forms.

Workings of the world untie! You have a win to world!
Notes:

Capital Is Dead by Mckenzie Wark is out now.