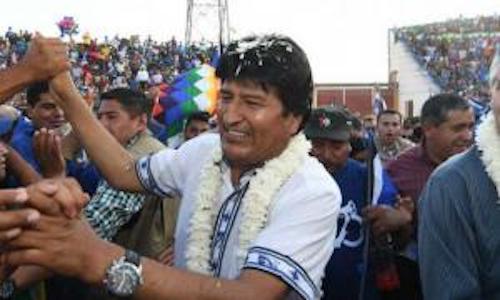 The preliminary results of the elections in Bolivia confirm decisive popular support for the government of Evo Morales. Photo- ABI

The plot is unfolding. The right in Bolivia, based in the department of Santa Cruz, intends to proclaim its candidate, Carlos Mesa, as President, ignoring the results of Sunday’s elections that gave Evo Morales a clear victory – an obvious coup attempt backed by a few governments in the region and that of the United States.

Faced with this situation, Evo issued a call: “To my colleagues and the Bolivian people, to my sisters and brothers, to organize, prepare, and we will defend democracy,” PL reported.

The President stressed that he is confidently waiting for the Supreme Electoral Tribunal (TSE) to issue its final report.

Meanwhile, the opposition called a civic strike in Santa Cruz, and stated that they will ignore the constitutional government of Morales and install what they called “a new constitutional President.”

For her part, the president of the Supreme Electoral Tribunal, María Eugenia Choque, insisted that she “has nothing to hide” and guaranteed the transparency of the vote, rejecting allegations of fraud by candidate Carlos Mesa and sectors that support him.

The transparency of the elections was highlighted by the Cuban Foreign Minister, Bruno Rodríguez Parrilla, in his remarks at the preparatory ministerial meeting for the 18th Summit of the Non-Aligned Movement: “We congratulate the people and government of Bolivia for the transparency of the electoral process they have conducted. We congratulate President Evo Morales for the preliminary results obtained, which confirm decisive popular support for his government, results that we expect to be confirmed.”He denounced the campaign of misinformation, destabilization, and violence underway, staged by sectors of the opposition and instigated by the United States, threatening the peace and security of citizens in Bolivia.