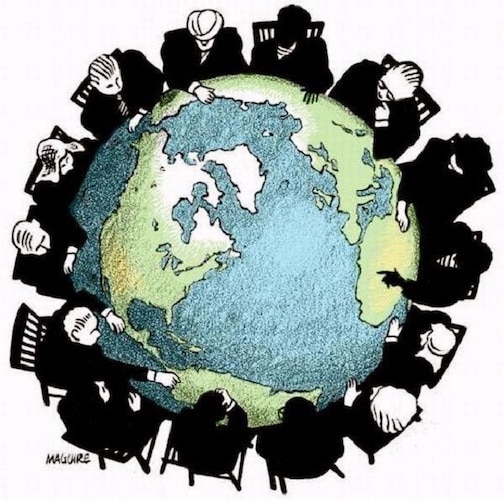 APARTHEID IN THE GLOBAL GOVERNANCE SYSTEM

In my research I have argued that rising global inequality is driven in large part by power imbalances in the global economy, in that rich countries have disproportionate influence when it comes to setting the rules of international trade and finance.

Nowhere is this problem more apparent than when it comes to voting power in the World Bank and the International Monetary Fund (IMF), two of the key institutions that govern global macroeconomic policy. People tend to assume that representation in these institutions must be fair and democratic, modeled perhaps along the lines of the UN General Assembly. But quite the opposite is true. Indeed, they are fundamentally anti-democratic.

On top of this, voting power in these institutions is skewed heavily in favour of rich countries. The United States has 16% of the votes, which gives it de facto veto power over all major decisions (decisions need 85% of the vote in order to carry).

The next largest vote-holders are France, Germany, Japan and the UK–all members of the G7. Middle-and low-income countries, which together constitute some 85% of the world’s population, have only about 40% of the vote.

Not only is there minority control over global economic policymaking, there is also a clear racial imbalance at play: on average, the votes of people of colour are worth only a tiny fraction of their counterparts. If this was the case in any particular country, we would be outraged. We would call it apartheid, or a racial dictatorship. And yet a form of global apartheid operates right at the heart of international economic governance, and hardly anybody talks about it.

In some cases the differences between countries are particularly striking. Take Bangladesh and Nigeria, both of which were British colonies. A British person’s vote today is worth 41 times more than a Bangladeshi’s vote, and 23 times more than a Nigerian’s vote-and this is many decades after the end of colonial rule.

This brings us to an important point. The inequalities that characterize voting power in the WB and IMF have their roots in the colonial period. After all, these institutions were founded in 1944. Countries that were colonies at the time–and even countries that were former colonies–were integrated into the system on intentionally unequal terms. Of the original 44 member states, the G7 held 62% of the total voting power, with well over half of that monopolized by the U.S.

It is remarkable, when you think about it, that the institutions that govern global economic policy–and which determine domestic economic policy in countries across the global South, in the form of structural adjustment programmes–are in effect colonial institutions. They were designed with colonial principles in mind and they remain fundamentally colonial in character to this day, some seven decades after decolonization.

Indeed, the anti-democratic character of the WB/IMF is precisely why they were able to impose structural adjustment in the first place, which ended up devastating global South economies. Such ruinous policies would never have been acceptable under democratic principles.

There have long been calls by global South countries to democratise the World Bank and the IMF. For decades these were blithely ignored. A reform package was finally introduced in 2010, but it turned out to be little more than window dressing: only 3% of voting power was shifted from rich countries to poor countries (about half of that going to China), and the U.S. retained its veto.

Defenders of this apartheid-style system point out that voting power is allocated according to the monetary contributions that each nation makes to the WB/IMF in the form of share purchases. Theoretically, bigger economies can make bigger contributions. Apologists argue that this is a legitimate approach: it makes sense, they insist, that bigger economies should have more say in decisions related to the global economy.

First of all, it doesn’t actually work this way. China is the world’s second biggest economy. India’s economy is bigger than France’s. Despite their economic size, they are not allowed to purchase more shares-indeed they are actively prevented from doing so. The fact that big global South economies have been relegated to minority status in the World Bank and IMF suggests that there is another logic at play altogether–a racial logic, a colonial logic.

In any case, think of the implications of the claim that voting power should be allocated according to income. In any national political system we would reject the notion that the rich should have more voting power than the poor-it would be repulsive. And yet, astonishingly, such overt plutocracy is routinely promoted by those who defend the WB/IMF system.

Ultimately, the voting system at the WB/IMF contributes to the perpetuation of global inequality. The system ensures that the very countries that became rich by plundering the global South during the colonial period are now, by dint of their plunder, empowered to determine the rules of the global economy in their own interests, indefinitely. Inequality begets inequality.