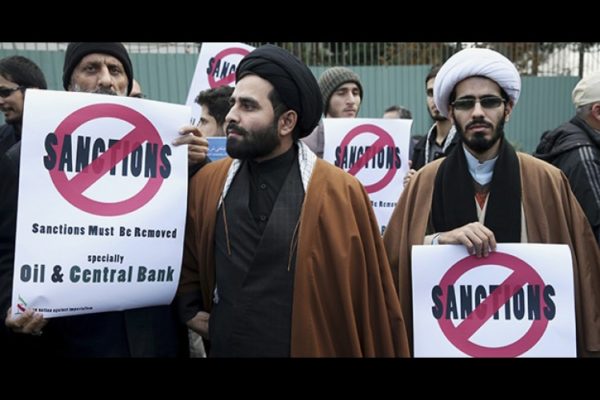 In late October, Human Rights Watch released a short report with a sharp title—“Maximum Pressure: US Economic Sanctions Harm Iranians’ Right to Health.” In November 2018, a year ago, the U.S. renewed its unilateral sanctions against Iran, and included “secondary sanctions” on non-U.S. entities. These secondary sanctions choked off Iran’s ability to commercially buy many products, including crucial medical supplies. “The consequences of redoubled US sanctions,” writes Human Rights Watch, “pose a serious threat to Iranians’ right to health and access to essential medicines—and has almost certainly contributed to documented shortages—ranging from a lack of critical drugs for epilepsy patients to limited chemotherapy medications for Iranians with cancer.”

Human Rights Watch is not the first to document this serious situation. The unilateral U.S. sanctions in the Obama period had already badly damaged the health of Iranians. In 2013, Siamak Namazi wrote a first-rate report for the Wilson Center, in which he noted, “sanctions are indeed causing disruptions in the supply of medicine and medical equipment in Iran. Procurement of the most advanced life-saving medicines and their chemical raw materials from the United States and Europe has been particularly challenging.”

Over the course of the past several years, the medical journal The Lancet has run a series of important studies of the deteriorating health conditions in Iran as a result of the unilateral U.S. sanctions. This August, five doctors based in the United States and Iran wrote a powerful editorial in The Lancet, which pointed out that Iran’s system of universal health coverage has been deeply damaged by the sanctions, and that Iran is at “a high risk of moving towards a severe situation for the provision of health services with a potentially substantive impact on mortality and morbidity.”

A year ago, Dr. Seyed Alireza Marandi, the president of Iran’s Academy of Medical Sciences, wrote one of many letters to the UN secretary-general. He pointed out that patients who require organ transplants and who have cancer are being “deliberately denied medicine and medical equipment.” There has been no public answer to these letters.

The evidence is undeniable. The U.S. sanctions are seriously destroying Iran’s health infrastructure and are leading to immediate deaths and suffering of the Iranian population. Last year, UN special rapporteur on the negative impact of the unilateral coercive measures Idriss Jazairy concluded from a look at the sanctions regime, “The current system creates doubt and ambiguity which makes it all but impossible for Iran to import these urgently needed humanitarian goods. This ambiguity causes a ‘chilling effect’ which is likely to lead to silent deaths in hospitals as medicines run out, while the international media fail to notice.”

The United States government has used whatever mechanisms possible to suffocate Iran. It has used its Specially Designated Global Terrorist (SDGT) facility, its Specially Designated Nationals and Blocked Persons (SDN) list, and its Financial Crimes Enforcement Network (FinCEN) to tighten its grip on the Iranian economy. Human Rights Watch reiterated what humanitarian agencies have been saying over this past year, which is that banks refuse to allow their services to be used to transfer money even for humanitarian reasons.

The United States is welcome to trade or not to trade with any country that it wishes, but the stranglehold that the United States has on the financial system means that U.S. sanctions and secondary sanctions prevent other countries from making their trading decisions.

In August 2019, Jan Egeland, the head of the Norwegian Refugee Council, which works with Afghan refugees in Iran, said, “We have now, for a full year, tried to find banks that are able and willing to transfer money from donors.” Egeland is not naïve. He was the UN’s undersecretary-general for Humanitarian Affairs and Emergency Relief from 2003 to 2006.

Squeezing the banks has allowed the U.S. government to wreak havoc on Iran’s ability to import food and medicines, impacting the human rights of Iranians. There is ample evidence that the U.S. government is not merely intent on hurting the government, but in fact has a strategy to attack the Iranian people.

The Human Rights Watch report is called “Maximum Pressure” for a reason. This is the phrase associated with the Trump–John Bolton policy toward Iran that led to the U.S. withdrawal from the Iran nuclear deal (the Joint Comprehensive Plan of Action, or JCPOA) and the reinstatement of harsh sanctions. As the U.S. put these sanctions on Iran in November 2018, U.S. Treasury Secretary Steven Mnuchin said, “The maximum pressure exerted by the United States is only going to mount from here.” This is, as Human Rights Watch notes, “a recipe for collective punishment.”

Universal health care has been the basic policy orientation of the Iranian government. The program received focus in 1985 with the establishment of the National Health Network, and then over the next several decades—hampered by lack of resources—the rural and urban Family Physician programs. By all indications, the health care system in Iran has been sharply hit by the sanctions—mainly since this has made it impossible to import key materials (such as bandages for epidermolysis bullosa and drugs to reduce inflammations such as tumor necrosis—a factor that inflicts those who had been struck by chemical weapons used by Iraq against Iran—and supplied by Western Europe and the United States).

Iran has over the past century developed a high-quality indigenous pharmaceutical industry—now rooted in the public sector Social Security Investment Company. Until the past few years, Iran had been able to produce a wide range of drugs, but even here there has been attrition, since several of these production lines rely upon imports of key components of the drugs.

A few days ago, Venezuela’s Minister for Science and Technology Gabriela Jiménez was in Tehran to buy medical equipment, including a hundred dialysis machines. This tells us two things: first, that Iran continues to produce medical equipment and pharmaceutical drugs—despite the sanctions; and second, that these two countries that are being hit hard by the West’s hybrid war have had to turn to each other for trade. Venezuela’s medical system has been hit harder than that of Iran—last year, the Venezuelan Pharmaceutical Federation reported that it was suffering from an 85 percent shortage of essential medicines.

It is a measure of the fortitude of Iran that—despite these unilateral U.S. sanctions—it has been able to maintain production of medical equipment and drugs. Nonetheless, the Human Rights Watch report should be seen as an alarm.

The United Nations has repeatedly said that sanctions are not a humane policy and must no longer be allowed to be part of the arsenal of the powerful nations. Exceptions for medicines and food are routinely argued for. The United States claims that it does not use sanctions to hurt people, which is why it often provides exceptions. In August 2019, the U.S. government released guidance that putatively softened its policy vis-à-vis Venezuela. It said that “humanitarian support can flow” into Venezuela. Even if this is merely rhetoric, no such softening has occurred for Iran. The U.S. has not issued any such guidance toward its policy on Iran. Rather, it has tightened these dangerous sanctions as part of its hybrid war against Iran.