If you’ve been keeping track of corporate media coverage of the U.S. economy over the past several years, you might have noticed a contradictory pattern. You’ll find that corporate media make ubiquitous references to a “strong economy,” while simultaneously providing many reports on the increasingly impoverished and precarious working class alongside the continuously rising fortunes of the rich.

Last month, a New York Times report (10/20/19) exemplified this seemingly bizarre practice when it wondered why so many workers are striking when we apparently live in such a “strong economy,” because the piece also discussed how “today’s strikes are fueled by a deeper sense of unfairness and economic anxiety.”

Even though corporate media are now warning us not to be too complacent because of a potential imminent recession and slowing GDP growth (CNN, 8/18/19; Wall Street Journal, 10/30/19), references to a “strong economy” and an “economic recovery” from the Great Recession still abound.

Three years ago, the New York Times (12/2/16) remarked that former President Barack Obama was handing off a “strong economy” to President Donald Trump, even as it noted that “tens of millions of Americans understandably feel that the recovery has passed them by.” Two years later, Times columnist David Brooks (11/29/19) led off a column by declaring, “We’re enjoying one of the best economies of our lifetime.” 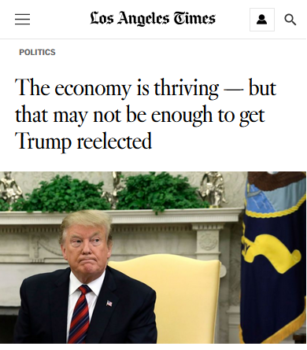 This year, the Los Angeles Times (5/3/19) pondered the two “great conundrums” of the Trump presidency: “How does his approval rating stay so bad when the economy is so good, and what might that forecast about his prospects for reelection?”

Politico (10/15/19) and Reuters (10/15/19) advise us that election models are forecasting Trump’s likely reelection based on “economic trends in key swing states” under his administration, as CNN (7/5/19) proclaimed that the “strong economy” is functioning as Trump’s “safety blanket” for his reelection chances. The Financial Times (5/8/19) declared that “there is no doubt that the U.S. is the strongest large economy in the world,” even as it warned that “much of the growth surprise appears temporary.”

The “strong economy” narrative is so thoroughly entrenched, the Atlantic (8/5/19) observed that even Democratic presidential candidates are wary of mentioning “economic growth,” lest it sound like an implicit endorsement of the Trump administration’s policies. However, following slower GDP growth and recession forecasts, some Democratic presidential candidates, like Joe Biden, are changing their campaign strategies by claiming that Trump is “squandering” the “strong economy” inherited from the Obama administration, reversing their previous view of discussing the “strong economic data” as a “losing” electoral strategy (Reuters, 8/22/19).

To the extent that there is a “debate” over the existence of a “historic recovery” and a “strong economy,” it is largely restricted to whether the economy was better under the Obama administration or under the Trump administration, and over who “really” deserves credit for this allegedly amazing economy.

The Washington Post has run several comparative articles (6/25/18, 5/7/19, 8/20/19) arguing that Trump “inherited” the “strong economy” from Obama, even wondering if this economy is “too good to be true?” while noting that the “vital signs look solid.” CNBC (9/7/18) declared that Trump has “set economic growth on fire,” praising a “economic boom uniquely his” as a “tremendous achievement.” The Wall Street Journal (5/5/19) discussed how a poll found that “select groups of Americans” who disapprove of his job performance are still willing to credit Trump for a “bustling economy,” while USA Today (7/1/19) discussed a survey that found that the “solid economy is doing little to bolster support for President Donald Trump.” Some articles have pushed back on the idea that Trump deserves the credit for the “strong economy,” instead crediting the Federal Reserve and Congress, or a vague “broader, global trend” (New York Times, 8/8/19; Wall Street Journal, 11/8/17). 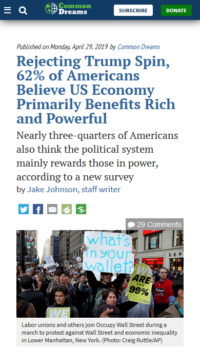 But who determines whether we live in a “strong economy,” and what metrics should we use to find out? Despite what media say, most Americans believe that the economic system is “rigged” to benefit the wealthy elite at the expense of the working class (CNN, 6/28/16; Pew Research, 10/4/18; Common Dreams, 4/29/19). Do the standard economic metrics deployed by corporate journalists accurately capture and explain the feelings and economic situation of most American workers?

When one also reads the contradictory coverage found in corporate media regarding the precarious situation facing the American working class, it’s clear they don’t. Here’s a nonexhaustive catalog of facts that make elite pundits like the New York Times’ David Brooks’ declaration that “We’re enjoying one of the best economies of our lifetime” appear fatuous and puncture this myth of a “strong economy.”

Overwhelmingly, many of these reports point to GDP growth (increased annual spending on total goods and services), a low unemployment rate (currently at 3.6%) and the number of jobs added to the U.S. economy as evidence of a “strong economy.”

However, the standard unemployment rate in the U.S. only includes people with no job who have been searching for work within the past four weeks; this leaves out significant portions of the population, like the underemployed and involuntary part-time workers (those who want full-time work but can’t find any), and discouraged workers who have given up searching for a job (Quartz, 6/7/18). This is why the New York Times (10/31/19) found that there are still millions of people not captured in the official unemployment rate, and people having trouble finding work in this “strong economy.” The U-6 unemployment rate, considered to be more accurate by economists because it includes discouraged workers and part-time workers seeking full-time employment, is 7%—almost double the U-3 unemployment rate usually cited by corporate media.

While there has been pushback against a widely cited 2016 study from economists Lawrence Katz and the late Alan Krueger, which found that 94% of job growth from 2005 to 2015 has been in precarious “alternative work arrangements” in the “gig economy,” there’s no shortage of studies and projections showing that freelancing, independent contracting and temp work for corporations like Uber are playing a larger role in the U.S. economy, without much of the job security and benefits found in more traditional jobs (NBC, 8/31/17; Forbes, 2/15/19; New York Times, 8/22/19).

Critically, throughout several years of reports on this “strong economy,” there have also been numerous reports on the persistent problem of low and stagnant wages. Although there are reports indicating that workers are finally seeing slightly better wage growth after decades of stagnant wages, it’s still only a fraction of record corporate profits (Washington Post, 11/2/18).

The long-term trend of wages not keeping up with the prices of essentials hasn’t improved much, as it’s been reported that minimum-wage workers can’t afford a two-bedroom apartment anywhere in the U.S. (The Economic Policy Institute—7/19/18, 2/5/19—found that if the minimum wage tracked productivity growth since the 1960s, it would now be over $20 an hour.)

Almost half of U.S. families are unable to afford the basics like rent and food, and 40% can’t afford an unexpected $400 expense, with almost 80% of U.S. workers living paycheck to paycheck. Perhaps this is why increasing numbers of people are living in poverty, in cars and on the streets, despite having jobs (CBS, 7/31/18; New York Times, 9/11/18; Washington Post, 3/22/19). These low and stagnant wages may also be why Americans are increasingly buried in debt, as student loan debt reached $1.5 trillion last year, exceeding all other forms of consumer debt except mortgages, and auto debt is up nearly 40% from the last decade, reaching $1.3 trillion (Wall Street Journal, 8/1/19).

One of the grimmest signs that the economy is not working for many is that U.S. life expectancy continues to drop, from a peak of 78.9 in 2014 to 78.6 in 2017. The drop is led by rising deaths from suicide, drug overdose and alcohol-related disease—known as “diseases of despair”—among men, particularly those without college degrees (Brookings Institution, 11/7/19). 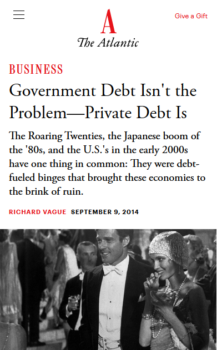 Richard Wolff has been one of the few economists who have argued that the media’s false “recovery hype” is a “weapon of mass distraction” (Extra!, 12/14) and observed (in Capitalism’s Crisis Deepens) that the finance industry’s decades-long wave of spectacular growth has coincided with stagnating wages beginning in the 1970s, as more and more Americans have to rely on debt to maintain their lifestyle and keep up with the soaring costs of essentials like housing, healthcare and higher education. Historically, private debt—not public debt—is the harbinger of economic disaster, contrary to the obsessive focus of media austerity hawks (Atlantic, 9/9/14; Guardian, 11/4/13; FAIR.org, 2/22/19).

Despite corporate media’s ludicrous “factchecks” on presidential candidate Bernie Sanders’ (correct) claim that “three people in this country own more wealth than the bottom half of America” (the Washington Post argued that the comparison is “not especially meaningful,” because “people in the bottom half have essentially no wealth, as debts cancel out whatever assets they might have”), journalists have consistently reported on the reality of rising prosperity of the wealthy, record stock markets and soaring corporate profits. (Of course, such stories are often presented as good news, as if higher stock prices benefited anyone other than people who own stock—Extra!, 7–8/02.)

Matt Bruenig at the People’s Policy Institute found that the top 1 percent’s net worth has increased by $21 trillion, while the bottom 50% of the population saw theirs decrease by $900 billion, from 1989 to 2018. Perhaps this is due to massive criminal tax evasion/avoidance by the wealthy and corporations in overseas tax havens (euphemistically labeled “loopholes”), coupled with unprecedented tax cuts for the rich, alongside relentless selective enforcement and increased taxes on the working class (FAIR.org, 12/6/17, 1/17/18).

Given all this, GDP growth tells us little about how wealth and income are distributed amongst the U.S. population. It’s theoretically possible for GDP growth to be entirely accounted for by things like increased military spending for a U.S.-driven arms race, corporations buying back stocks and paying out dividends to further inflate their stock prices—instead of giving raises to employees or hiring more of them—and the wealthy’s environmentally destructive conspicuous consumption of things like private jets and superyachts, since all of them count towards GDP. Journalists shouldn’t use GDP as an indicator of economic health without further context, because growing GDP alongside skyrocketing income and wealth inequality is not evidence of a “strong” economy, but of a parasitic economy.

What explains corporate media’s credulous reliance on uninformative economic measures, and contradictory references to a “strong economy,” alongside reports on a struggling working class? It makes little sense if one assumes corporate journalists are primarily concerned with informing the public. It makes a great deal of sense when one realizes that corporate news outlets have an inherent interest in cloaking class warfare by equating a “strong economy” with the prosperity of the investor class, even if it comes at the expense of everyone else (FAIR.org, 10/16/19).