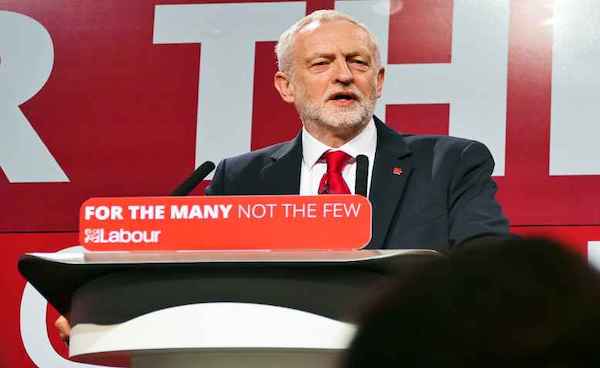 Once again, the establishment is on the attack over Jeremy Corbyn’s record on foreign wars. On Monday morning Nick Robinson’s interview with Emily Thornberry, which was supposed to be about Labour’s plans to improve the treatment of British soldiers, veterans and their families, turned into a tabloid style attack on Corbyn for not supporting enough of Britain’s wars.

Robinson repeatedly demanded to know from Thornberry if there was any war that Corbyn had supported, listing in an outraged tone the Falklands war, the Kosovo war, the attack on Afghanistan and the bombing of Syria in particular as examples of Corbyn’s unreliability. There was no recognition at least from Robinson’s side that all these wars have been highly controversial, none of them involved a defense of Britain from attack, most of them were deeply unpopular and all of them disasters of one form or another. The implication was old school; that anyone who wishes to be Prime Minister has a duty to support British military adventures come what may.

In fact, Corbyn’s positions on Britain’s recent history of belligerence have been proved correct and courageous time after time. Who now believes that holding on to the Falklands Islands, a colonial style protectorate with a population of 3,300 people 8,000 miles away, was worth the death of more than 900 people including 255 British service personnel? But speaking out over Thatcher’s war drums took some nerve at the time.

Blair’s first war in Kosovo in 1999 is still sometimes presented as a humanitarian success. The people of Serbia and Kosovo who experienced 78 days of some of the most intensive bombing in history can be forgiven for feeling differently. More than 1,000 civilians died in the onslaught which halved Serbia’s economic output and put at least 100,000 people out of work. The war was presented as a defense of the people of Kosovo, but even former NATO General Secretary Lord Carrington had to admit that it created ethnic cleansing rather than averting it.

Britain’s participation in U.S.-led wars this century has been calamitous. Every one of the countries attacked is in crisis or continuing civil war today. Corbyn’s record of opposition to these often Labour-led wars is one of the reasons why he has been voted leader of the party, twice.

The invasion of Afghanistan in 2001 turned out to be the start of the U.S.’s longest war. Tens of thousands have been killed and infrastructure devastated in an already war weary country. Its only achievement has been an increase of bitterness and hatred against the West. Western powers are now in negotiations with the Talban, the very organisation that the invasion was designed to destroy who now control the bulk of the country.

Outside strictly neo-con circles it is now accepted that the invasion of Iraq was a catastrophe. Up to a million were killed, many more displaced and the country devastated and divided along sectarian lines. But Corbyn stood out consistently against Blair’s enthusiastic support for George Bush’s adventure at the time. The overwhelming majority of media outlets, including the BBC, supported the war, and those public figures who stood with the majority of the British public in opposing it were allowed next to no airtime.

Learning nothing from this bleak record, the bulk of the commentariat have argued in favour of still more interventions since. The NATO-led attack on Libya in 2011 turned the country into a failed state, a territory fought over by three different armies. Western intervention in Syria deepened an existing civil war and exacerbated regional tensions, in the process drawing in other big powers.

The opposition of Corbyn and the wider anti-war movement to Britain’s aggressions has been vindicated in the most terrible way. As well as creating untold death and misery, the West’s wars have made the world an infinitely more dangerous place. With Donald Trump at the helm in the US anyone should be able to see these questions need to be taken very seriously. Dog whistle attacks on Corbyn over British security need to be opposed clearly and firmly whether they come from the media or the Tories, or for that matter the LibDems.

Anyone with any sense of history or concern about the future can see we urgently need a sharp change in our foreign policy. Corbyn is the only candidate in this election who has a chance of making that happen.