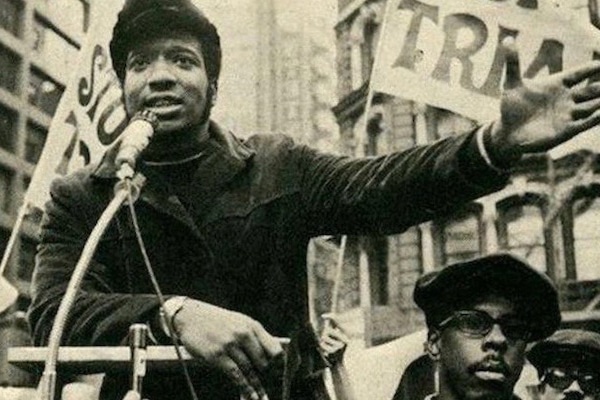 50th Anniversary of the Killing of Fred Hampton by Chicago Police

Chicago, never an enlightened city, has declared itself a sanctuary city to blunt federal predatory immigration policy and shrieks of a tweeter-in-chief inciting his base’s hatred of ‘The Other.’

Even with its new-found dignity, a “reform” mayor, Mexican Independence paraded down 26th King Drive, Bud Bilikin pageantry our immigrant city has yet to square a notorious racist past.

Chicago never an enlightened city where in a December 4, 1969 predawn west side raid at 2337 W. Monroe fourteen cops in cahoots with, we now know, the FBI, blasted their way Capone style ninety-nine flying bullets into a Black Panther apartment to a single outgoing shot killing party member Mark Clark (shot through his heart) and Illinois party chairman Fred Hampton (twice shot at close range in the head).

This in the middle of our military napalming Vietnamese Nixon’s law and order crackdown on cities, J. Edgar Hoover declaring the Black Power movement America’s #1 public enemy FBI agents ordered to “prevent the rise of a messiah who could unify or electrify the militant black nationalist movement.”

A community activist turned militant revolutionary born in the shadow of the Argo Corn Products plant off Archer Road in Summit, Illinois (where his parents worked alongside Emmett Till’s father). Fred Hampton solid-bodied with a shy big-dimpled grin was an orator par excellence and fearless the king of signifying able to rouse feet-stomping crowds to join him with shouts of,

I am, a revolutionary!

Once inside the apartment operating from a floor plan hand drawn by an FBI informant (actually Hampton’s body guard) a cop emptied his machine gun along a hallway wall into the bedroom where he knew Chairman Fred (probably drugged) slept.

At that moment Fred’s fiancé Deborah Johnson pregnant with his child was straddling Fred’s back the bed (she said) violently
shaking from bullets whizzing through the thin wall into the mattress.

Two cops stormed in flung her from the room then went back in where she heard the pop pop of a handgun a woman scream one cop saying,

Filmmaker Mike Gray’s grisly documentary The Murder of Fred Hampton staggers the imagination We Serve and Suspect
cops following orders can and will barge into your house shoot to kill you dead in your bed brag about it lie about it argue its merits period full stop.

Gray was tracking the 21 year old’s dynamism at party headquarters a people’s court trying Fred lively downtown speeches in Daley Plaza the People’s Church on Ashland free school kid breakfasts Panther run health clinics but needed an ending until he got the call Fred is dead come to 2337 W. Monroe bring your camera.

There’s a chilling black and white photo of a group of cops carrying out Fred Hampton in a body bag smirks on their faces lit by the flash leather jackets and pie hats fading into the predawn dark proud as punch of their hunting booty a job well done.

A “blatant act of legitimized murder” claimed white Maywood councilman Tom Streeter adding “and in the context of militant acts against militant blacks in recent months suggests a systemic act of repression” as FBI COINTELPRO surveyed Panthers were,

gunned down and jailed across the country.

Folks forget in the 1960s blacks were under nationwide siege by police folks forget point #1 of the Panthers 10-point plan “Freedom to determine the destiny of the black community” Panthers arming themselves with calls to “off the pigs” in essence to police the police menaced only terrorist cops haunting black neighborhoods.

Chicago’s heart beats blood power control from the Haymarket riot (1887) to cops ordered to shoot to kill or maim arsonists cripple looters in the King Riots (April 1968) to the whole world’s watching Democratic Convention police riot (August 1968) to Chairman Fred’s targeted murder a year later to Laquan McDonald shot sixteen times (2014) (the police killing video suppressed for 13 months) the Panthers at least challenged as best they could what a recent report calls a culture of “excessive violence” within the Chicago Police Department the beat goes on.

Chicago never an enlightened city with shoot ‘em up weekends school kids escorted down safe corridors crushing poverty Mag Mile mammon Panthers a faded tattoo a bruise beneath the skin that never heals a sanctuary city in search of its humanity.

Gary Johnson is an associate professor of writing at Columbia College Chicago.