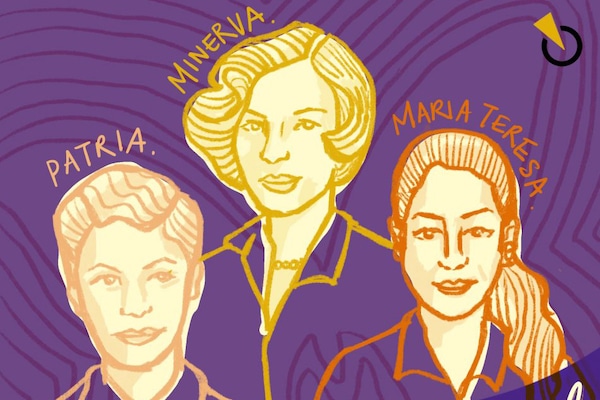 On 25 November 1960, three of four of the Mirabal sisters–María Teresa, Minerva, and Patria–of the Dominican Republic were assassinated for their resistance against the dictatorship of Rafael Trujillo. The youngest of the three–María Teresa–said before her death, ‘Perhaps what we have most near is death, but that idea does not frighten me. We shall continue to fight for justice’.

Twenty-one years ago, at the first Encuentro (Encounter) of feminists from across South America held in Bogotá (Colombia), the idea germinated to use that day–25 November–to honour the Mirabal sisters and to pledge to fight against violence against women. The idea gradually moved into the United Nations, which–in 2000–resolved to commemorate the International Day for the Elimination of Violence Against Women each 25 November.

In Santiago (Chile) this year, women–organised by the feminist collective Las Tesis–gathered on 25 November outside of the Ministry for Women’s Rights and Gender Equality to protest not only the historical patriarchy in their country but also the police’s behaviour–including rape–during the ongoing protests across Chile.

The oppressive state is a macho rapist
The rapist is you
‘Sleep well innocent little girl, without worrying about bandits; your sweet dreams and smile will watch over the policemen who love you’.
The rapist is you

Their chant reverberated across the world. In India, a 27-year-old veterinarian was raped and murdered, just as in South Africa Precious Ramabulana was raped and murdered. Their deaths made the news; many do not. The World Health Organisation collects the numbers, which show that 1 in 3 women around the world experience physical or sexual violence, mostly by an intimate partner. 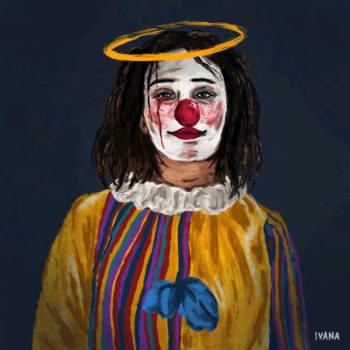 This makes it the most widespread but among the least reported human rights abuses. These numbers are inadequate. There are large gaps in gender data, which makes women and girls invisible to government and international agencies. These gaps occur because governments do not invest enough in collecting gender statistics and because data on issues facing women and girls is not collected with regularity. Women do not register cases of harassment and rape for social reasons, but also because of the impunity delivered to the rapists by the State (it is not always easy to register a case with the police, and it is equally hard to get a conviction for the harasser and rapist).

Daniela Carrasco, known as La Mimo (the Mime), joined the protests in Chile. She was arrested on 19 October, and then a few hours later found dead, marks of torture on her body. Edgardo Zouza’s poem shouted her name so that it is not forgotten:

We did not forget your name,
Daniela Carrasco.
How can we believe what they say:
the murderers,
torturers,
rapists …? 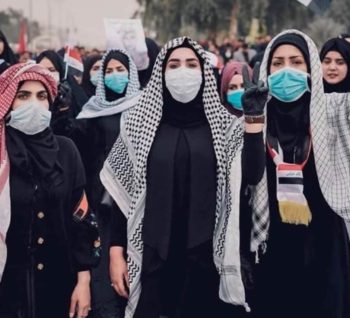 Female students protest at the University of Kufa, Iraq, November 2019

There are a range of reasons why violence against women remains high, and perhaps has inched upwards. These go from entrenched patriarchal ideas to economic vulnerability. No class and no continent are immune from violence against women. The Inter-Parliamentary Union published a survey in 2016 of female parliamentarians in 39 countries across the continents. Of the women interviewed, 82% said that as parliamentarians they had experienced some form of psychological violence, which includes remarks, gestures and circulation of sexist imagery, and physical threats. About 44% said that they had received death, rape, assault, or abduction threats. Undignified and sexist behaviour from male colleagues was routine. This is the situation for women who are elected officials.

The database at the Armed Conflict Location and Event Data Project (ACLED) shows that violence against women who participate in politics has increased with each year. This is precisely what the women on the streets of Chile chanted about. In an ACLED report (‘Terribly and Terrifyingly Normal’: Political Violence Targeting Women) published earlier this year, Dr. Roudabeh Kishi and her colleagues documented the techniques used to target women who are active in struggles to protect the environment, to defend their communities, and to organise unions. Last year, in Basra (Iraq), Suad al-Ali, who ran al-Weed al-Alaiami for Human Rights, was assassinated. Almost a year later, in Colombia, in the lead-up to the elections of this year, Karina García–a mayoral candidate in Cauca–was assassinated. What divides these women is geography; what unites them is politics. Please have a look at our Dossier no. 23 on the contradictions between the peace process and war making in Colombia.

Women in every country on the planet have raised the issue of violence against women–from sexual harassment to rape to femicide. Mexico–where the protests against femicide have been sustained–produced the powerful hashtag: #terremotofeminista (feminist earthquake). As the right-wing and neo-fascists have emerged with their reactionary ideas about women’s role in society and in the family, they have placed their anti-abortion views front and centre; this is why the fight for abortion and reproductive rights is both for the right of a woman to choose what is done to her body, and it is for the right of women and men to create a progressive society and nurture progressive ideas of the ‘family’. 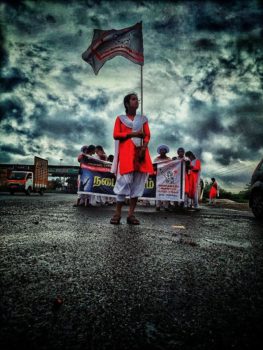 In Tamil Nadu (India), the All-India Democratic Women’s Association (AIDWA) organised a Long March to raise awareness about violence against women. They walked for 400 kilometres across this state of 68 million people; when they converged on the capital–Chennai–on 4 December for a rally, the police arrested over a hundred AIDWA activists.

More and more women have taken to the streets to demand that they have more decision-making power and that they not be subordinated to men–not only in parliaments and bureaucracies but also inside political parties and political movements. When Lebanese women who had been on the streets found themselves being depicted in a sexist way, they said ‘we are revolutionaries, not babes’. Theirs was a protest within the protest.

At a protest against violence, women raise the issue of economic injustice and the fragility of the care economy; it is likely that someone will demand more political rights for women. These are not demonstrations that can be easily classified as social or political or economic. Part of the reason why these issues run against each other is that the regime of austerity has worn society to the bone and pushed women–for patriarchal reasons–to work harder and harder to maintain families and communities. If the ‘invisible hand’ failed to take care of people, the ‘invisible heart’ had to do so. It was the experience of the cuts in the care economy that deepened the radicalisation of women in our societies. Their feminism emerged from their experience of patriarchy and structural adjustment policies. It was capitalism’s tendency to harness violence and deprivation that hastened the journey of working-class and indigenous feminism directly into the projects of socialism and communism that remain alert in our time. As the tide of neoliberalism continues to wash over the world, and as it engulfs societies in anxiety and heartache, it is women who have been the most active in the fight for a different world.

Sudanese women, including Alaa Saleh (age 22), take to the streets to say, ‘From Sudan- A Salute to the Revolutionary Women of Lebanon’.

Earlier this year, the International Labour Organisation (ILO) published a report, Quantum leap for gender equality, which demonstrated the horrendous conditions of work for women. Most women wanted paid work, but few were able to find it. Women who did find paid work were employed in occupations that are considered to be low skill. Women are more exposed than men to informal employment in over 90 per cent of sub-Saharan African countries, 89 per cent of countries in Southern Asia, and almost 75 per cent of Latin American countries.

Women are not able to find jobs where they can rise to leadership positions, nor are they easily able to find jobs that require skills for which they do have training. The reason is not because men are more educated than women, but because women do the bulk of unpaid care work. Across the world, 606 million working age women (or 21.7 per cent) perform unpaid care work on a full-time basis, compared to 41 million men (or 1.5 per cent). Between 1997 and 2012, the time that women devoted to housework and caregiving diminished by only 15 minutes per day, while for men it increased by just eight minutes per day. At this pace, it is estimated that the gender gap in time spent in unpaid care work would not be closed until 2228; in other words, closing the gap would take 209 years. 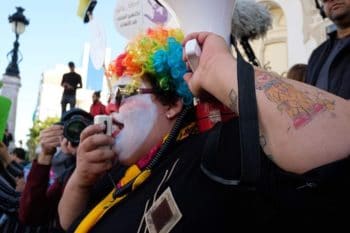 In Dossier no. 18 (July 2019), K. Hemalata, the President of the Centre for Indian Trade Unions (CITU), said that when the Indian unions went to organise women in the child care sector in 1989, they were startled to find high levels of militancy amongst these precarious workers. It is worth ending this newsletter with this reflection from Hemalata:

We found that the women workers faced harassment–even sexual harassment–at work. Their anger at low wages and at harassment made them very militant. We held regular meetings, where the women pushed an agenda to struggle. They were very brave. In the face of retrenchment and of police attacks, they fought on. A lot of political pressure was exerted on these women. But their confidence in the union could not be broken.