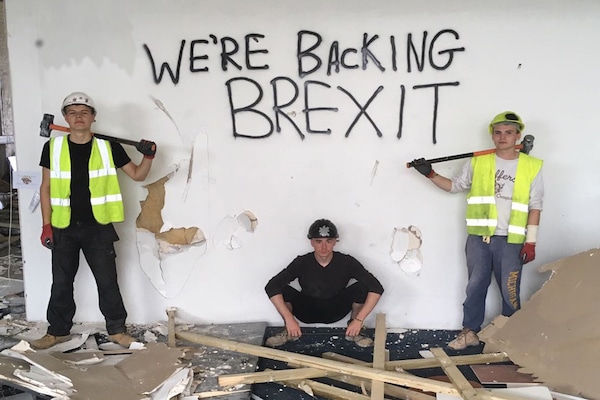 Lexit would have won. Part I

You never give as much succour to the extreme right as when you cut off the mechanism for democratic change.

THE exit poll hit us like a punch to the gut. But despite few on the left predicting a wipeout on this scale, many of us were not shocked.

The experience of this campaign was different to 2017. Huge numbers came out to canvas for Labour, but something felt grim.

A broad taxonomy of explanations for labour’s defeat has already begun to bloom. Guardian liberals like Polly Toynbee and Paul Mason have, of course, begun their pining for a charismatic centrist leader, along the lines of the traditional parties of European social democracy, who everywhere lie in tatters.

Some point to Proportional Representation as a cure to the situation, since under PR we would remain in a hung parliament. Others suggest we were simply overwhelmed by media bias, or that Corbyn was not charismatic enough.

We might be tempted by this to adopt a kaleidoscopic pluralism in our response to the election, seduced by the appearance of sophistication in declaring that there were multiple factors that led us to this point, but that would distract us from a reality which is in this instance sadly stark: Lexit would have won.

It is not an over-simplification to simply line up the two elections of 2017 and 2019 side-by-side, and see what changed. What were the conditions in 2017, where we surged 10 per cent forward in the biggest increase in vote-share since Attlee in 1945?

Jeremy Corbyn led the party. The manifesto was historically left wing by Labour standards. The media was unrelentingly, cripplingly hostile. The parliamentary Labour party had been in mass open revolt just weeks before. The party’s position on brexit was to respect the result of the referendum.

In 2019, where we were crushed, all these things were identical–with the exception of two. The PLP was no longer in open revolt, and the party’s brexit position had changed. Now we would back a second referendum where the majority of the shadow cabinet would push for Remain against their own deal, and the official line would be neutrality.

Where did we lose and why? It doesn’t take a data analytics degree to read off the obvious. Of the 47 labour seats lost to the Tories, 43 were Leave areas.

Labour heartlands fell one after another, in some cases to massive conservative majorities. Quite plainly, we lost because we were lining up to thwart a democratic referendum result, where the majority of the working class voted Leave.

This is borne out by previous polling; elections tend to annihilate the memory of prior trends, but those of us at the coal face know. Before the Labour leadership was pressured into adopting a Remain-in-all-but-name position, we were narrowly ahead in the polls. Afterwards we declined, and we kept declining.

The reason for this is simple–even among Remainers, most wanted the referendum result respected. A massive Comres poll in November provided the empirical proof of this, with 54 per cent arguing the result should stand and 32 per cent for a second referendum.

This has much wider implications than the issue of EU membership alone. It positioned our party in the public mind as a set of business-as-usual lying politicians. In 2017 we said the 1 per cent were ‘right to be scared of us’, in 2019 we moved to frustrate a direct expression of democratic will. In 2017 we promised to ‘overturn this rigged system’, in 2019 we clung to parliamentary procedure and John Bercow.

Corbyn did his best to resist this capitulation, but key media figures like Owen Jones, Ash Sarkar, and in the end even John McDonell, turned the thumbscrews until it was done. This left the field wide open to the Tories to make a claim that in any other period would have earned them derisive laughter–that it was they who were the anti-establishment force, that it was they who could break the deadlock of an elite parliament holding back the will of the people.

Working-class people did not vote for the Tories for any other reason, because the Tories had no other policies. Carbon-neutral by 2050 is meaninglessly long-term, and the promise to build hospitals was easily exposed and barely defended.

The ground was there to be taken, and we lost it.

We cannot blame this outcome on media bias. Of course it’s true that the media were relentlessly and overwhelmingly hostile to us, that they lied merrily through their teeth throughout the campaign–but it’s beneath socialists to whine about that.

We are not in a sporting competition, governed by rules of fair play. We are in a class war.

Complaining about the rich and powerful using the media to strangle us is nothing but a complaint that the other side are fighting back. They will never behave otherwise. We have to find ways to win despite their onslaught in the press. We showed we could do it two years ago–if the election cycle in 2017 had gone on for one more week, we’d have won, and with a bigger share of the vote than Blair in 1997.

Equally we cannot blame the personal leadership of Jeremy Corbyn, despite the Ashcroft polling superficially suggesting this was important. Leadership can be a nebulous concept–but if we won a vote share of historic proportions in 2017 with the exact same man, the idea our defeat is down to his inherently poor leadership qualities is not serious.

What could we have done, then, to alter this path? Many have argued–not implausibly–that if we had stuck with our position of respecting the result, we would have hemorrhaged votes to the Lib Dems instead. This didn’t happen in 2017, but it could be argued that it would have now, with greater intensity of focus on brexit.

The only way to have avoided this impasse was a position of not merely respecting the result, but of actively campaigning for a left exit from the European Union, right from the start–when Corbyn became leader. Many know that Corbyn and McDonnell are Eurosceptics in the Bennite tradition. It is a position which is clear, consistent, and correct.

The wider left only shied away from it for fear of the right having poisoned the issue into anti-migrant nationalism, but this is a self-fulfilling prophecy–if an organisation of half a million members had explained passionately and clearly the opportunities for a serious break with neoliberalism outside the anti-democratic strictures of the EU, there would have been no right-wing monopoly on Leave.

The hundreds of thousands of enthusiastic new members in Labour were for the most part unaware a serious left-wing critique of the EU even existed. We could have won them to this view, and mobilised the full force of our membership behind an insurgent view of a socialist nation, lighting the beacon fire for a socialist Europe that battered down the grey austerian bureaucracy of the European Union.

Crucially, this message could have unified the traditional working class in the Northern towns with the metropolitan workers in the cities–and even those we did not persuade would have largely agreed that the result should be respected.

It would have been a battle of two visions. On one side a lame Tory offer of a “global Britain”, with our workers’ rights smashed and our NHS hacked to death by American pharmaceutical companies. On the other a piercing cry to smash our way out of the straitjacket of the EU, and end the screaming inequality left to us by nine years of Tory rule. Boris would have never left that fridge.

Instead the liberal commentariat got their way, and our class was sneered at as backward old racists (Paul Mason), with “parochial lizard brains” (Laurie Penny). It would be hard to overstate the damage this did, except that the damage is now in plain sight, and now we reap the whirlwind.

What lessons can we learn from this? First, that any social-democratic project must be a signpost, not a weather-vane. We stick to arguments on the basis of merit, and we do not go whichever way the wind blows.

Second, we stick to the class we are aiming to represent, and we never sneer at any part of it. Third, we must be bold enough to name the key architects of this terrible mistake. We do this not out of spite, but because they must now account for their errors, and for their demonisation of Lexit advocates and the Lexit position over the last couple of years.

Alex Birch is an NEU rep and executive member of his Labour CLP.