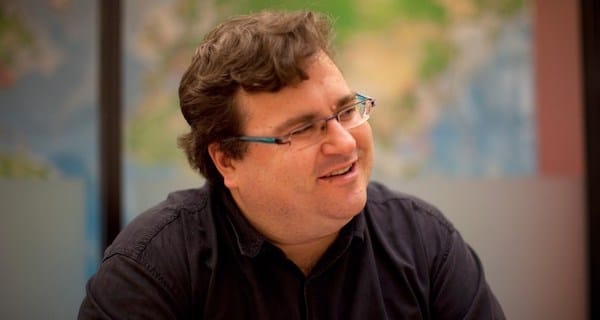 At the time of publication, February 6, the winner of the Iowa’s Democratic Party caucus is still unknown. Senator Bernie Sanders, the clear winner in virtually every exit poll, is currently ahead in votes. Yet somehow Pete Buttigieg, a favorite of the party establishment who was unknown to most voters until last year, has claimed victory.

The force accused of sowing the confusion and disarray surrounding the first Democratic Party contest of the 2020 election season is a dark money nonprofit called Acronym. It was Acronym that launched Shadow Inc, the mysterious company behind the now-infamous, unsecured, completely unworkable voter app which prevented precinct chairs from reporting vote totals on caucus night.

The exceptionally opaque Acronym was itself created with seed money from a Silicon Valley billionaire named Reid Hoffman who has financed a series of highly manipulative social media campaigns.

The billionaire founder of LinkedIn, Hoffman is a top funder of novel Democratic Party social media campaigns accused of manipulating voters through social media. He is assisted by Dmitri Mehlhorn, a corporate consultant who pushed school privatization before joining Hoffman’s political empire. 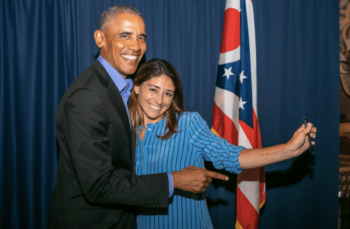 One of the most consequential beneficiaries of Hoffman’s wealth is Acronym CEO Tara McGowan, a 33-year-old former journalist and Obama for America veteran.

Once touted as “a weapon of a woman whose innovative tactics make her critically important to the Democratic Party,” McGowan’s name is now synonymous with the fiasco in Iowa. She also happens to be married to a senior advisor to Pete Buttieg’s presidential campaign.

Back in December 2018, McGowan personally credited Hoffman and Mehlhorn’s “Investing in US” initiative for the birth of her dark money pressure group, Acronym.

“I’m personally grateful and proud to be included in this group of incredible political founders + startups @reidhoffman and his team, led by Dmitri [Mehlhorn], have supported and helped to fund over the past two years,” she declared on Twitter in December 2018.

I’m personally grateful and proud to be included in this group of incredible political founders + startups who @reidhoffman and his team, led by Dmitri, have supported and helped to fund over the past two years. https://t.co/o0QApPbHWY

At the time, Hoffman had just been exposed for funding Project Birmingham, a covert disinformation campaign consisting of false flag tactics that aimed to depress voter turnout and create the perception of Russian interference in the 2017 Alabama senate election.

Hoffman and Mehlhorn have also faced scrutiny for their alleged operation of a series of deceptive pages which attempted to manipulate center-right users into voting for Democrats. Today, Acronym’s McGowan oversees a massive Facebook media operation that employs similarly deceptive techniques to sway voters.

Through youthful, tech-centric operatives like McGowan, Hoffman and Mehlhorn are constructing a massive new infrastructure that could supplant the party’s apparatus.

As Vanity Fair reported, “Hoffman and Mehlhorn, after all, are not just building a power base that could supplement traditional Democratic organizations, they are, potentially, laying the groundwork to usurp the D.N.C. entirely.”

‘Laying the groundwork to usurp the D.N.C. entirely’

Having fostered friendships with nationally known Silicon Valley oligarchs like right-wing libertarian Trump supporter Peter Thiel and Mark Zuckerberg of Facebook, Reid Hoffman, the founder of LinkedIn, is now making his name as a top sugardaddy of the Democratic anti-Trump resistance.

Following Trump’s election in 2016, Hoffman plowed his money into an array of new Democrat-aligned social media groups through a funding hub he founded called Investing in US.

To run Investing in U.S. on a day-to-day basis, Hoffman tapped Dmitri Mehlhorn, a venture capitalist and political strategist accustomed to walking the line between the corporate world and Democratic Party.

“There was no risk-capital or growth-capital arm of the resistance, and so that is what we’ve tried to build,” Mehlhorn told Vanity Fair. “Now, in terms of what that implies, that implies that we are backing founders, so people who we think have big, potentially game-changing ideas.”

Mehlhorn’s career path tracked closely with neoliberal party favorites like Pete Buttigieg and Cory Booker. He studied at Harvard’s Kennedy School of Government, launched his career at McKinsey Associates, and became a leading advocate for school privatization as the chief operating officer of Michelle Rhee’s StudentsFirst. 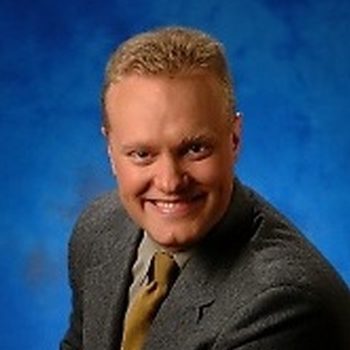 According to Mehlhorn’s bio, he sits on the board of American Prison Data Systems, a company that claims to reduce recidivism by giving prisoners tablets to study coding for five hours a day.

Mehlhorn is also an advisor to the Democratic group DigiDems, which Pete Buttigieg’s 2020 presidential campaign paid $1,540 for technology services.

In a 2018 Medium post, announcing the “founders” that Investing in U.S. planned to back, Mehlhorn resorted to distinctly neoconservative talking points to emphasize the mission of his organization.

After quoting Ronald Reagan, he declared, “Trump and his movement, borrowing heavily from other authoritarian criminals such as Hugo Chavez and Vladimir Putin, promised to hollow out America’s principles in favor of his own personal enrichment.”

Pledging to “inoculate our politics and our economy against corruption, white nationalism, and mass deceit,” Mehlhorn announced major donations to “diverse groups” with names like Woke Vote, PushBlack, and an “anti-Nazi” organization known as Integrity for America.

Among the top recipients of support from Investing in U.S. was McGowan’s Acronym, which Mehlhorn described merely as a “media group.”

As The Grayzone reported, Acronym has ballooned since its founding into a massive dark money operation, even launching a Super PAC dubbed Pacronym that has raked in money from hedge fund billionaires like Seth Klarman and Donald Sussman.

What Mehlhorn and Hoffman never disclosed to the public, however, was their support for a Democrat-aligned group that waged a covert online disinformation campaign which aimed to influence the outcome of the 2017 special senate election in Alabama.

Project Birmingham: From New Knowledge to no knowledge

The 2017 senate election in Alabama was one of the most dramatic races of President Donald Trump’s first term in office. Treated by national media as a referendum on Trump in a red state, it pitted a far-right Republican, Roy Moore, against Doug Jones, a moderate Republican who ran as a Democrat. In the end, Jones won an upset victory in a deep red state, thrilling Democrats across the country.

As Dan Cohen wrote in a series of reports for The Grayzone, the outcome of the 2017 Alabama race was heavily influenced by an online disinformation operation. The campaign, which was unknown to voters at the time, was called Project Birmingham.

In internal documents first covered by the New York Times, Project Birmingham’s architects described the scheme as an “elaborate false flag operation” which aimed to convince voters that the Kremlin was supporting Moore through thousands of fake Russian bots.

Project Birmingham went to absurd lengths to drive voters away from Moore. Its architects deployed a phony Facebook page encouraging Alabamians to vote for an obscure write-in Republican candidate, arranged interviews for the candidate in major newspapers, and even sought to arrange SuperPAC funding for his dark horse campaign.

The deeply un-democratic campaign was overseen by a cast of characters remarkably similar to those who bungled the 2020 Iowa caucus count. Like the staff of Acronym and Shadow Inc., the New Knowledge operatives who carried out Project Birmingham were 30- and 40-something techies who had worked in the Obama administration and on various Democratic campaigns. (New Knowledge was rebranded as Yonder after the scandal was exposed in national media.)

After the scheme was exposed, Hoffman issued a public apology and claimed he had no knowledge of the New Knowledge disinformation project. He said nothing about the Investing in U.S. employee who worked directly on Project Birmingham, however.

This was hardly the first time Hoffman and Mehlhorn’s finger prints were discovered on a deceptive voter manipulation campaign.

Aiming to ‘mirror’ the tactics of Russia’s Internet Research Agency

This shady outfit managed an array of community Facebook pages initially focusing on sports, Christianity, patriotism, and other topics that were likely to generate interest from right-wing voters in swing states.

Yet the seemingly locally-branded cultural pages took a decisively political turn as election night approached. After racking up millions of likes, News for Democracy slipped in ads for Democratic Senate candidate Beto O’Rourke on a Facebook page targeting evangelical Christians, and attacked a Republican candidate, Senator Marsha Blackburn, on a page focused on local Tennessee sports.

While Hoffman’s right-hand man, Mehlhorn, claimed to reject the spread of misinformation, he told the Washington Post that through projects like News for Democracy, he aimed to “mirror” the tactics of the notorious Russian Internet Research Agency troll farm.

A Senate report on $100,000 of Russian Facebook ads (56% of which appeared post-2016 election) sent U.S. media into a frenzy. Its authors have since been exposed for spending the same amount on a “Russian style” op to swing a Senate race: https://t.co/8y38s1uwNn via @dancohen3000

Facebook eventually launched an investigation into the insidious manipulation ploys of Hoffman and Mehlhorn’s News for Democracy.

The very tactics that landed the two in hot water are remarkably similar to those that Tara McGowan, the Acronym founder who disrupted the Iowa caucuses, has put on display.

As Bloomberg reported, McGowan used “her sizable war chest and digital advertising savvy to pay to have her articles placed into the Facebook feeds of swing-state users.” McGowan then used “that feedback to find more people like them.”

One of McGowan’s dubious news pages, the Virginia Dogwood, spent a whopping $275,000 on Facebook ads during the 2018 midterm elections.

“We’ll try it, see if we can make it work, and hopefully become a permanent piece of the new infrastructure,” McGowan told Bloomberg.

Tara McGowan’s shenanigans in Iowa could be seen in the light of a wider string of manipulations by the Silicon Valley-backed neoliberal network behind her. While Democratic Party elites blame incompetence for the fiasco in Iowa, the history of Acronym and its billionaire backers casts a disturbing shadow over the whole episode.