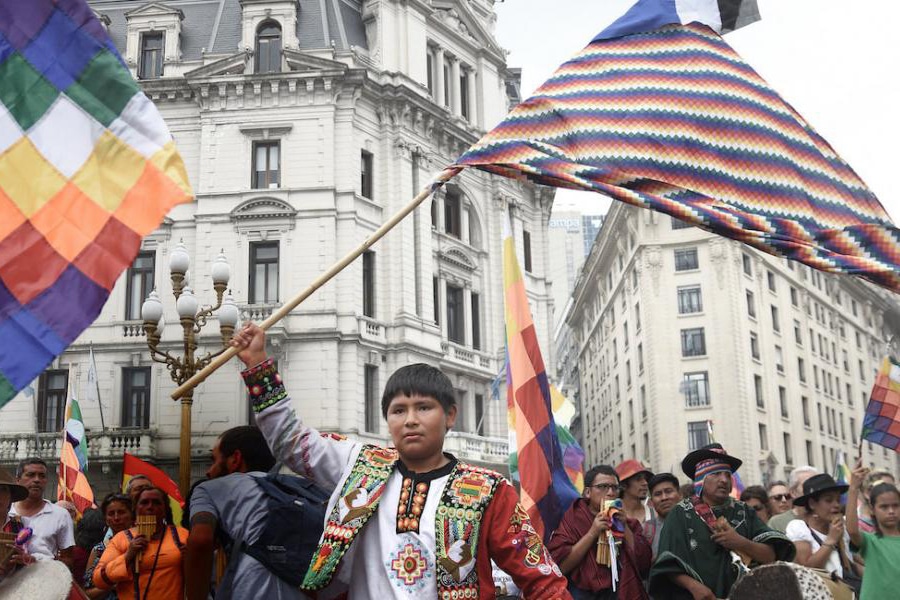 Bolivia: An Election in the Midst of an Ongoing Coup. (Photo by: Santiago Sito)

On May 3, 2020, the Bolivian people will go to the polls once more. They return there because President Evo Morales had been overthrown in a coup in November 2019. Morales had just won a presidential election in October for a term that would have begun in January 2020. Based on a preliminary investigation by the Organization of American States (OAS) that claimed that there was fraud in the election, Morales was prematurely removed from office; the term for his 2014 presidential election victory did not end until January. Yet, he was told by the military to leave office. An interim president—Jeanine Áñez—appointed herself. She said she was taking this office only on an interim basis and would not run for election when Bolivia held another election. She is a candidate for the May 3 election. (For more information on what is happening in Bolivia, see this overview from Tricontinental: Institute for Social Research.)

Meanwhile, Morales has been in exile in Argentina. His party—the Movement for Socialism (MAS)—has candidates for the presidency and the vice presidency, but their party cadres and followers are facing a difficult time making their case to the people. Their radio stations have been blocked, their leaders arrested or exiled (or sitting in foreign embassies waiting for asylum), their cadre beaten up and intimidated.

The United Nations secretary-general’s personal envoy Jean Arnault released a statement on February 3 that expressed caution about the elections. The situation in Bolivia, Arnault said, is “characterized by an exacerbated polarization and mixed feelings of hope, but also of uncertainty, restlessness and resentment after the serious political and social crisis of last year.” This careful language of the UN needs to be looked at closely. When Arnault says there is “exacerbated polarization,” he means that the situation is extremely tense. When he asks that the interim government “outlaw hate speech and direct or indirect incitement to violence or discrimination,” he means that the government and its far-right followers need to be very careful about what they say and how much violence they use in this election.

On February 6, Morales spoke in Buenos Aires, where he urged an end to the violence so that the election could bring the fractured country together. He called for a national agreement between all sides to end the dangerous situation. In a pointed way, Morales called upon the government to respect diversity, noting that people wearing distinct clothes and wearing the signs of a certain political party were facing intimidation and violence. He meant the indigenous population of Bolivia, and the supporters of MAS; it is widely accepted that the violence has been coming from the far right’s paramilitary shock troops, and the intimidation has been coming from the government.

For instance, the Bolivian authorities have been routinely charging MAS leaders with sedition, terrorism, and incitement to violence. Morales faced these charges, along with dozens of important MAS leaders, most recently Gustavo Torrico who has been arrested. Matters are so bad that the UN’s special rapporteur on the independence of judges and lawyers, Diego García-Sayán, took to Twitter to express his concern at the “use of judicial and fiscal institutions for the purpose of political persecution. The number of illegal detentions grows.” This has not stopped Áñez, who says she will move her government to investigate at least 592 people who held high office in Morales’ 14 years in government. This means that the entirety of the MAS leadership will likely face harassment between now and the May 3 election.

In 2013, Morales expelled the U.S. government agency USAID; he accused USAID of working to undermine his elected government. Before that, Morales, as is his constitutional right, informed Salvador Romero—the head of the election agency (TSE)—that when his term ended in 2008, he would not be retained. This is a normal practice.

Romero went to the U.S. Embassy to complain. He met with U.S. Ambassador Philip Goldberg to complain about this and urged the U.S. to do something. It was clear that Romero and Goldberg knew each other well. When Romero left his post at the TSE, the U.S. establishment took care of him. He went to work at the National Democratic Institute in Honduras. The National Democratic Institute, based in Washington, is loosely affiliated with the U.S. Democratic Party, and is part of the universe that includes the National Endowment for Democracy. These are all U.S. government-funded agencies that operate overseas to “oversee” what is known as “democracy promotion,” including elections.

Romero essentially worked for the U.S. government in Honduras during the first election after the U.S.-instigated coup of 2009. During this election in 2013, violence against the supporters of Xiomara Castro, the candidate of the left-wing Libre Party, was routine. The day before the election, for instance, two leaders of the National Center of Farmworkers (CNTC)—María Amparo Pineda Duarte and Julio Ramón Maradiaga—were killed as they returned home from a training for Libre election workers. This was the atmosphere of this very tight election, which returned to power the U.S.-backed conservative candidate Juan Orlando Hernández of the National Party. Romero, at that time, was quite pleased with the results. He told the New York Times then that “despite ‘the general perception of fraud,’” the election was just fine.

Right after the coup in November, Áñez brought Romero back to La Paz as the head of the election court, the TSE. He has his old job back. This would have made Bruce Williamson, the U.S. charge d’affaires to Bolivia, very happy. The U.S. has its man at the helm of the May 3 election in Bolivia.

And then Trump said he is sending USAID to Bolivia to help prepare the ground for the election. On January 9, the USAID team arrived to “give technical aid to the electoral process in Bolivia.” Technical aid. The phrase should give a reasonable person pause.

Ten days later, Trump’s legal adviser Mauricio Claver-Carone arrived in La Paz and gave a series of interviews in which he accused Morales of terrorism and creating instability. This was a direct attack at MAS and interference with Bolivia’s electoral process.

If the U.S. intervenes in Bolivia, that is just “democracy promotion.”

But even with the violence from the government and its fascistic paramilitaries, even with Romero at the helm of the TSE, even with USAID on the ground, and even with the shenanigans of Claver-Carone, MAS is fighting to win. The candidates for MAS are Luis Arce Catacora (president) and David Choquehuanca Céspedes (vice president). Catacora was the minister of economy and public finance under Morales and the architect of the administration’s economic success. Céspedes was the foreign minister in that government. He managed Bolivia’s policy of international sovereignty and is an important person to Bolivia’s indigenous and peasant movements. Early polls show that the MAS ticket is in first place.