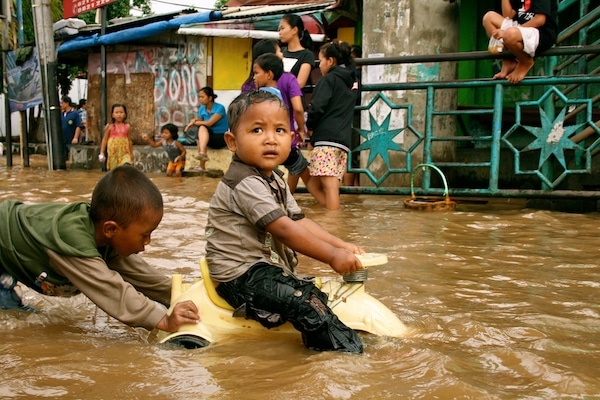 In recent weeks there have been devastating floods in Indonesia. What are the latest statistics about these and is there a link with global warming?

According to the Meteorology, Climatology and Geophysics Agency, rainfall in Jakarta in early 2020 was the highest in history, more than 300 millimetres per day. It correlates directly with climate change.

There were also sea-level rises of 4–8 centimetres per year on Jakarta’s North Coast. Sea-level rise is a direct result of the climate crisis.

However, other factors contributed to the flooding in Jakarta, namely the unpreparedness of the government and subsidence, which is occurring faster than the rise in sea level.

In addition, heavy extraction of groundwater contributes to land subsidence. Residents take groundwater because they cannot get clean water from the water pipes, especially since Jakarta’s water supply was privatised in 1997.

Clean water reaches only 60% of Jakarta’s total population, so water privatisation has proved to be a failure. The public needs to take back management of Jakarta’s water.

What about reports of some islands in Indonesia that have already submerged because of sea-level rises?

Based on the environmental research by the WALHI regional office in South Sumatra, there are two islands in the province, Betet and Gundul, that have been submerged due to sea-level rise.

These two islands are in the administration of Banyuasin Regency, South Sumatra province. Betet Island is now one metre below sea level, while Gundul Island is three metres below sea level.

It is predicted that in 2020 four more islands will sink. Climate projections state that by 2050 there will be 23 million people throughout Indonesia who will be forced to leave their homes because of rising sea levels due to the climate crisis.

What are the other impacts of the global climate crisis on Indonesia?

The climate crisis causes the dry season to get longer, as happened in 2015 and 2019. The El Nino effect will occur more frequently, thus changing the growing season for farmers. This will affect food security and reduce the production of staple foods, especially rice.

What demands are environmental organisations making on the Indonesian government, on international institutions and the richer countries to deal with the climate emergency?

Indonesia must abandon fossil fuels, especially coal, as soon as possible: according to the International Panel on Climate Change’s Special Report: Global Warming of 1.5°, coal must be abandoned as the primary energy source in the world by 2050.

In addition, the Indonesian government must stop deforestation, and forest and land fires, because the land-based sector is the biggest cause of carbon emissions in Indonesia.

The Indonesian government must also strengthen community adaptation, especially to the dangers of the climate crisis that will occur later, as well as prepare efforts to push the developed countries and corporations responsible for the loss and damage that has occurred.