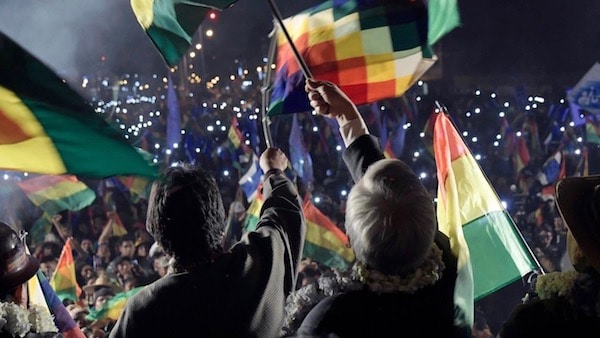 Over three months have passed since Evo Morales was forced to step down as president of Bolivia in a civic-military coup d’état. Since that day, November 10, Bolivia has faced instability, crisis, and violence as the de-facto government led by the far-right, Bible-wielding Jeanine Áñez has taken the fast track to reversing the historic achievements made during the 13 years of the Movement Towards Socialism (MAS) government.

The underlying justification for the coup and the rallying cry of the violent anti-government protests that led up to the coup, was that Morales and MAS committed electoral fraud in the elections held on October 20. Observers had pointed out that this narrative had been carefully constructed by the Bolivian right-wing preceding the elections as they knew that the race this time around would be close.

At a key moment where tensions were escalating and extreme violence was being carried out against MAS supporters and members of Evo’s government, the Organization of American States (OAS) released a statement supporting the claim by the far-right that fraud had taken place. The OAS expressed “its deep concern and surprise at the drastic and hard-to-explain change” in the results. The organization provided the institutional support that the racist mobs needed to strengthen and intensify their demands which went from calling for a second round to demanding the resignation of Evo.

A coup d’état and several months later, researchers Jack R. Williams and John Curiel from the Election Data and Science Lab at the Massachusetts Institute of Technology released a report confirming what progressive organizations have been saying since October: Evo Morales’ victory was legitimate. Through a careful study of the vote and looking at the preliminary count (trep) and the official count (computo), they were able to counter the OAS’ claim that there was a drastic change in the progression of the results.

They concluded: “The OAS’s claim that the stopping of the trep during the Bolivian election produced an oddity in the voting trend is contradicted by the data. While there was a break in the reporting of votes, the substance of those later-reporting votes could be determined prior to the break,” and that “We find it is very likely that Morales won the required 10 percentage point margin to win in the first round of the election on October 20, 2019.”

Understanding the October elections in Bolivia

According to Bolivia’s electoral system, the presidential election will not go to a second round if any candidate wins over 45% of the vote and has a margin of over 10% over the runner-up. Evo was clearly leading all voter intention polls before the October 20 elections, both due to his popularity and the extremely fragmented right-wing. However, it was not entirely clear whether he would win the presidency in the first round itself by achieving the necessary margin over right-wing candidate Carlos Mesa. On the day of elections, the preliminary tally showed that Evo had not won enough votes to clinch a first-round victory. But in the successive days, as the remaining votes were counted, the trend indicated that Evo would just about gain a 10-point advantage. On October 24, the Supreme Electoral Tribunal declared him winner with 47.08% while Carlos Mesa got 36.51%.

The alleged shift in the trend was exactly what the right-wing in Bolivia needed to raise allegations of electoral fraud. Opposition leader Carlos Mesa called on supporters to mobilize and far right-wing mobs immediately took to the streets, burning electoral authority offices and ballots in several municipalities and carrying out highway blockades.

On the morning of November 10, 2019, after more than 20 days of violent riots, threats and targeted acts of violence against members of MAS, including the racist, misogynist public attack against mayor Patricia Arce in Vinto, Cochabamba, the OAS released the preliminary report of its electoral audit. In this report, they pointed to a series of alleged irregularities and violations in the process and declared: “The audit team cannot validate the results of this election and therefore recommends another electoral process.”

Following the release of the report, Morales announced that he would accept a second-round election with Carlos Mesa, but the momentum was already against him. Hours later, the head of the military, general Williams Kaliman, held a press conference and called for Morales to resign. At 5 pm president Evo Morales and vice-president Alvaro García Linera held a press conference and announced that due to grave threats to their lives and the lives of their family members, they had to resign.

In this context and especially with the latest revelations, it is clear that the OAS acted as nothing more than as an accomplice to the Bolivian far-right and imperialist forces that have long opposed Morales’ measures to nationalize Bolivia’s natural resources for the benefit of the people. Elections are set to be held in Bolivia on May 3 and the de-facto government has gone all out to target the MAS. It has pressed serious charges against dozens of MAS members and candidates, impeding their entry into the country with threats of arrest. It has also detained several MAS candidates and disqualified the candidacy of Evo Morales and others. Unsurprisingly, the OAS has not raised any questions about the guarantees to free and fair elections when the opposition is either in exile or in prison.