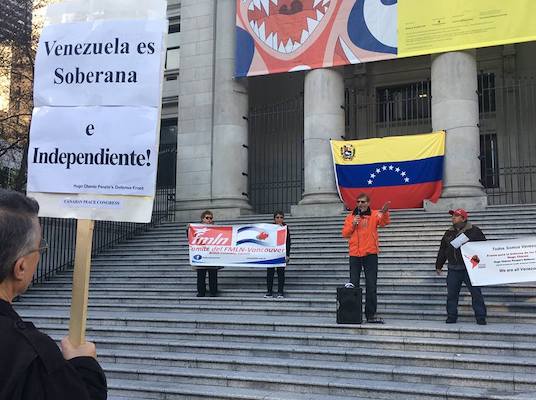 Canada’s public media the CBC long-ago entered the ranks of yellow journalism when it comes to its reporting on Venezuela. However, two recent reports, in particular, one on CBC radio’s “The Current” and the other a CBC News article by reporter Evan Dyer, weigh heavy on the sensationalism and light on facts. Filled with unsubstantiated claims, right-wing pundits parading as “pro-democracy” advocates and unchallenged declarations by the government of Canada officials, once again, the CBC firmly establishes their role as the mouthpiece of the government Canada.

CBC’s Lies and Manipulations Against Venezuela

The economic and humanitarian crisis, environmental disaster, restoring democracy, Minister Champagne said them all. The other 16 minutes of the program had nothing further to offer, in terms of reporting or analysis because these are the buzzwords that mark the depth of mainstream media coverage on Venezuela.

Minister Champagne also fails to mention one word, one which the mainstream media has also willfully neglected to include in any of their reporting–sanctions. Neither he nor the entire episode of The Current bothers to mention that the governments of Canada, the United States, and the European Union have all imposed illegal and immoral sanctions and blockade on the people of Venezuela. So much for an objective discussion on the government of Canada’s Venezuela policies and actions.

And who the CBC invite to the program to comment on the government of Canada’s foreign policy with Venezuela?

First, Mr. Galloway welcomed Yvon Grenier, as a “professor of political science at St. Francis Xavier University in Antigonish, Nova Scotia”. Supposedly presenting him as an intellectual authority figure, with an objective point of view, the CBC neglected to mention the title of his most recent book–“Culture and the Cuban State, Participation, Recognition, and Dissonance under Communism (2017),” or his position as a fellow at the right-wing Brian Mulroney Institute of Government, which recently hosted Stephen Harper’s former Chief of Staff as a “honoured guest speaker.”

Cleary, his position on the government of Venezuela, which continues to allocate a large part of its budget to social programs, is not the kind of government Mr. Grenier would support.

The Current did play the words of the NDP deputy foreign affairs critic, Heather McPherson, including her comment that “What concerns me most is the idea that by meeting with Guaidó that the prime minister is taking a side and is putting his nose where it doesn’t belong” (which he clearly is).

However, Matt Galloway allowed Professor Grenier to dismiss her statement with a mere one-sentence repetition of what he had already said–that Guaidó is a legitimate President and the government of Canada is right to intervene–in so many words. Yet again, the pundits go unchallenged, and an audio clip that could have led to critical thought and discussion about Canada’s warmongering foreign policy was cut off before it could begin.

Next, Mr. Galloway welcomed Maryhen Jimenez, as a “lecturer in political science at the University of Oxford who has studied the Venezuelan opposition movement,” to the program. Her introduction was slightly more revealing of her bias, but it omitted the focus of her research “explore uneven patterns of opposition coordination in autocracies…” Of which, her biography continues, Venezuela is one of her countries of study. Matt Galloway started the report on Venezuela with “It was just over a year ago that Juan Guaidó declared himself interim president following national elections widely considered to be fraudulent,” so inviting Ms. Jimenez, who bases her research on the idea that Venezuela is an “autocracy” is fitting.

It’s almost as if the producers for The Current looked for two guest speakers with the most similar perspective as possible–if it was a position against the government of President Maduro.

Now, it might be considered understandable that former U.S. President Jimmy Carter, who declared the election system in Venezuela the “best in the world,” might have been hard to reach for comment. However, there are many people from Canada, including the author of this article, that was in Venezuela as elections observers when President Maduro was re-elected in May of 2018.

It seems out of the question that the CBC would ever get comments from any of the millions of people in Venezuela that support the Bolivarian revolutionary process and President Maduro. However, there are journalists, academics, unionists, students, and workers right here in Canada that could attest to how the United Nations and 75% of countries around the world recognize President Maduro, not the U.S. puppet Guaidó, as the President of Venezuela. People who could talk about how President Maduro received 68% of the vote, which represented a higher percentage of votes from the entire electorate, then either Trudeau or Trump received in their last election. Venezuelan Canadians who could comment on how the government of Canada refused to let them vote from within Canada in the Venezuelan Presidential election. Even someone that could remind the CBC and their “expert” guests that Guaidó never ran in any election to be President of Venezuela. Undoubtedly, one of us would have been available, had anyone from the CBC asked.

If The Current and the CBC intended to discuss the government of Canada’s foreign policy towards Venezuela–they indeed should have reached out to someone directly impacted by Canada’s sanctions against Venezuela. Only a week before this report, Venezuela Olympic athlete Alejandra Benítez was denied a visa to Canada under these cruel and arbitrary sanctions. Alejandra Benítez’s had hoped to compete in the Montreal Grand Prix, a fencing competition that is a qualifying event for the 2020 Olympics in Tokyo. But, her chances of making it to the Olympics were quashed because she was Venezuela’s Minister of Sports from 2013-2014. Indeed, she would have been happy to share her story with people in Canada.

Instead, The Current didn’t even bother to pretend that they are providing balanced reporting that is in opposition to the line of the Liberal government. The Trudeau government’s policy towards Venezuela is a playbook lock in step with the United States’ objective to bring about the overthrow of the President of Venezuela, Nicolas Maduro. For all intents and purposes, the CBC is in support of these anti-democratic and anti-human policies.

Now, undoubtedly, the CBC would work harder to present more than rhetoric on Venezuela in their articles. Well, not if the article “Canada considers new international push to oust Venezuela’s Nicolas Maduro,” by veteran CBC journalist Evan Dyer is of any indication. This 1500-word article could also be summed with a short quote from the government of Canada.  Justin Trudeau’s, “I commend Interim President Guaidó for the courage and leadership he has shown in his efforts to return democracy to Venezuela, and I offer Canada’s continued support. Canadians stand with the people of Venezuela in their pursuit of free and fair elections, and basic human rights” would do just fine.

In 1500 words, Mr. Dyer managed to parrot nearly every lie about the government of President Maduro that has become the mainstay of the mainstream media war against Venezuela, especially when it comes to the election of Luis Parra as the President of the National Assembly in Venezuela on January 5. Guaidó is not President of the National Assembly anymore. Yet, Mr. Dyer continues the CBC’s shameful trend of presenting the point of view of Venezuela’s counter-revolutionary opposition as objective fact–all the while presenting the government of Canada’s intervention in the internal affairs of Venezuela as a foregone conclusion that is immune to any critical thought.

Much the same as The Current, Mr. Dyer couldn’t be bothered to mention U.S., Canada, and European Union sanctions in his article. How could he dare bring up the words “humanitarian crisis” without referencing a report by economists Mark Weisbrot and Jeremy Sachs of the Center for Economic Policy Research, which documented the deadly impact of the over 350 sanctions since 2015. According to their findings, these sanctions killed an estimated 40,000 people from 2017-2018. As Alfred de Zayas, a United Nations Independent Expert, wrote in his 2018 report from his mission to Venezuela to the UN Human Rights Council, “Modern-day economic sanctions and blockades are comparable with medieval sieges of towns with the intention of forcing them to surrender. Twenty-first-century sanctions attempt to bring not just a town, but sovereign countries to their knees.” It appears these types of reports are of no use to the CBC.

This pro-war, “news” article, would be a much better fit in the opinion page of any major corporate newspaper or website.

With manipulative coverage such as this, how is it that the CBC can continue to claim that they operate on the principle that “All employees of CBC News, as well as the content they create, must respect the principles of accuracy, fairness, balance, impartiality, and integrity as expressed through the Journalistic Standards and Practices”?

The Media War Against Venezuela Continues

It is not just the CBC, major corporate media in the U.S. and Canada is decidedly attempting to manufacturer consent for the pro-intervention stance of Trump and Trudeau through lies and manipulatio ns. A study by the non-profit organization FAIR (Fairness and Accuracy in Reporting) found that in the three months between January 15 and April 15, 2019, there were “no voices in elite corporate media that opposed regime change in that country… zero opinion pieces in the New York Times and Washington Post took an anti-regime change or pro-Maduro/Chavista position. Not a single commentator on the big three Sunday morning talk shows or PBS NewsHour came out against President Nicolás Maduro stepping down from the Venezuelan government.”

Is it a mere coincidence that the CBC upped its slanderous coverage about the democratically elected government of Venezuela just as Guaidó was about to touch down in Ottawa? No way.

The CBC is a crucial part of maintaining the dog and pony show that Prime Minister Trudeau created around the arrival of Juan Guaidó to Canada on January 27, 2020. They made sure that people in Canada were unprepared to question the perfect selfie and the friendly exchange between Trudeau and Guaidó. Their profoundly inadequate, one-sided and manipulative coverage on Venezuela has silenced millions of people in Venezuela that support the Bolivarian revolutionary process and the democratically elected President of Venezuela, Nicolas Maduro.

The CBC has proven time and time again that they are unwilling to question the government of Canada’s sanctions and intervention in the internal affairs of Venezuela. They have refused to introduce even a shred of critical thought against the campaign led by the United States to overthrow the President of Venezuela, Nicolas Maduro, and reverse the tremendous gains of the last 20 years of the Bolivarian revolutionary process.

This professional neglect by the CBC, and other mainstream, capitalist media, elevates our responsibility as poor, working and oppressed people in Canada and the United States. We must unite together to create our own media and use all the means at hand to end U.S.-led intervention, blockade, and threats against the sovereign and independent country of Venezuela!

Alison Bodine is a social justice activist, author and researcher in Vancouver, Canada. She is the author of “Revolution and Counter-Revolution in Venezuela” (Battle of Ideas Press, 2018). Alison is coordinator of the Fire This Time Movement for Social Justice Venezuela Solidarity Campaign in Vancouver and is also a founding member of the Campaign to End U.S./Canada Sanctions Against Venezuela. @alisoncolette. She is a frequent contributor to Global Research.