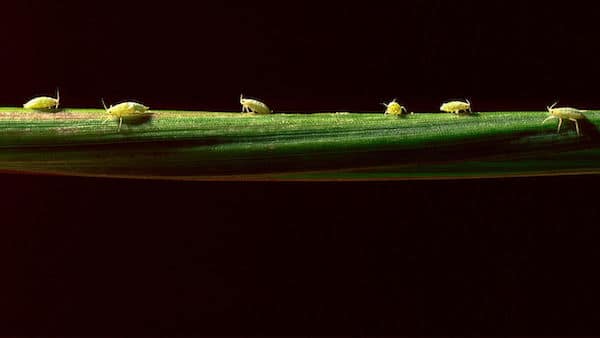 Researchers are studying whether aphids and other insects could be used to transmit viruses that help protect plants. LARRY MAYER/GETTY IMAGES

It sounds like science fiction: A research program funded by the U.S. government plans to create virus-carrying insects that, released in vast numbers, could help crops fight threats such as pests, drought, or pollution. “Insect Allies,” as the $45 million, 4-year program is called, was launched in 2016 with little fanfare. But in a policy forum in this week’s issue of Science, five European researchers paint a far bleaker scenario. If successful, the technique could be used by malicious actors to help spread diseases to almost any crop species and devastate harvests, they say. The research may be a breach of the Biological Weapons Convention (BWC), the piece argues.

The paper is likely to touch off another round in the long-running debate about “dual-use research of concern,” scientific work that may have benefits but could also be used for nefarious means. Other recent examples of such science include the creation of a flu mutant better able to spread in mammals and the synthetic creation of the extinct horsepox virus, a cousin of the virus that causes smallpox.

Funded by the U.S. Defense Advanced Research Projects Agency (DARPA) in Arlington, Virginia, Insect Allies aims to use insects such as aphids or whiteflies to infect crops with tailormade viruses that can deliver certain genes to mature plants; it’s essentially gene therapy for crops. The goal, DARPA says, is to find a new way to protect plants growing in the field from emerging threats. The approach would be faster and more flexible than developing new crop varieties in the laboratory, which can take years, says Blake Bextine, who manages the project at DARPA. The research is carried out by groups at Pennsylvania State University (Penn State) in University Park, The Ohio State University in Columbus, the University of Texas in Austin, and the Boyce Thompson Institute in Ithaca, New York.

But in their paper, the critics charge that “the program may be widely perceived as an effort to develop biological agents for hostile purposes and their means of delivery.” The BWC is strongly worded, banning the development of any biological agents “that have no justification for prophylactic, protective, or other peaceful purposes,” says Silja Voeneky, a legal scholar at the University of Freiburg in Germany and one of the authors. It’s hard to see such a justification for Insect Allies, she argues, because the method is hard to control and unlikely to be allowed in peacetime. Besides, there is an easier way to introduce viruses to plants: spraying. “If the peaceful purpose is to protect plants, there are all these unanswered questions,” Voeneky says.

She and her colleagues have also built a special website highlighting what they see as the problems of the project and providing drawings of “weaponized” insects for journalists covering the paper. They hope to start a public discussion about the development of a technology they say is immensely powerful. “Given 30 seconds and a bit of imagination, there is nothing that you can’t imagine a genetically modified virus could do, particularly if these viruses have the capacity to seek out in the environment a species and genetically alter them,” says the first author, Guy Reeves of the Max Planck Institute for Evolutionary Biology in Plön, Germany.

Nicholas Evans, a bioethicist at the University of Massachusetts in Lowell who was not involved in the paper, says developing a novel mechanism for disseminating biological weapons probably does not breach the BWC because intent plays a big role, and DARPA is claiming its intentions are peaceful. But developing the technology might still send a bad signal. “The most concerning, but less likely result is that it will encourage another state to begin investing in biological weapons,” Evans wrote in an email. Countries like Iran might see the research as a reason to hold up this year’s meeting of the BWC in December, Evans says. 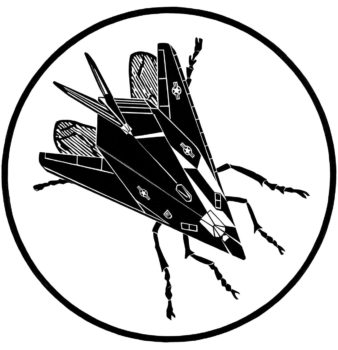 “Stealth fly,” an illustration provided by scientists to warn about a research program that they say could help weaponize insects STEALTH FLY, DYLAN EGON

Bextine says the critics are wrong. “DARPA is producing neither biological weapons nor the means for their delivery,” he says. James Stack, a plant pathologist at Kansas State University in Manhattan who serves on an advisory panel for Insect Allies, says the idea is nonsense. “If DARPA wanted to develop biological weapons to circumvent the [BWC], it is beyond credible to believe that they would have advertised a general call for universities to submit proposals to do the research,” he wrote in an email. He said he’s disappointed that Science published “such a defamatory article with essentially no vetting of the accuracy of the charges, which are without merit.” (A spokesperson for Science says the article is an opinion piece “making arguments based on public documents” and “was reviewed by experts in the field who know these issues.”)

Still, Bextine and Stack acknowledge that the research in Insect Allies could be misused. “There are dual-use implications for almost every type of research conducted and for every new technology developed,” Stack wrote. “Having said that, this is a fairly complicated approach requiring not only expertise with sophisticated technologies, but also deep knowledge and a fundamental understanding of the systems under study. There are many easier ways to cause harm.” The latter, however, “is not an argument relevant to the [BWC],” Voeneky says.

Wayne Curtis, one of the scientists working on Insect Allies at Penn State, says the project will advance the understanding of how plant viruses and insects interact, and will help develop new crop protection strategies. “The indirect benefit (that I feel outweighs the small risk) is the tremendous amount of science that this program will facilitate,” Curtis wrote in an email.

The scientific hurdles for the project are high. Some of the researchers are considering using gene-editing tools like CRISPR to change plant chromosomes, but Curtis thinks that is unlikely to work. Instead he hopes to express genes outside the chromosomes. Even then, reaching all the relevant cells in a plant may be a tall order, although “providing protection may not require infection of all cells,” he wrote. Insect Allies has not resulted in published papers so far, but Bextine says all four teams “were able to successfully test systems that met DARPA’s phase one milestones,” demonstrating expression of a gene for a fluorescent protein in plants delivered through a modified plant virus.

Evans agrees with the authors that the question why the method is being developed is crucial—and if DARPA can’t answer that, “the question is why scientists are so determined to make what could easily be a breakthrough with very limited utility, but serious safety and security risks,” he says.

Bextine says the agency’s mission is “to pursue revolutionary and technologically high-risk projects. … DARPA would never fund the next generation of aerial spraying technology.” Reeves scoffs at that argument. “That doesn’t seem to be a very compelling reason to engage in something that risky,” he says.

And that is a British understatement.

Kai Kupferschmidt is a contributing correspondent for Science magazine based in Berlin, Germany. He is writing a book about the color blue, to be published this autumn.