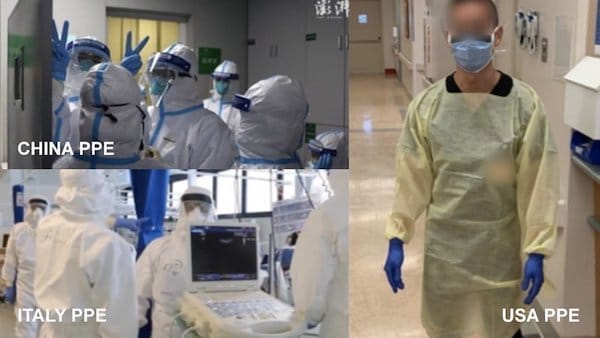 The fatalistic view from an ER Nurse on what’s ahead

Being an ER Nurse, a lot of people have asked me what I think about COVID-19. I almost inevitably tell them- first and foremost- that I really can’t overstate how much of a problem it is that we don’t have enough personal protective equipment (PPE).

Sure, we don’t have enough ventilators. Frick, forget ventilators, I don’t think we have enough drugs to keep the number of patients we’re potentially anticipating sedated, not if every hospital in the country is drawing on them at once. Imagine having a tube jammed down your throat and potentially being conscious the whole time- and these COVID patients are intubated for days; weeks. Probably closest approximation I can think of to what Hell would be like.

But I always come back to PPE, and our complete lack of the volume we need. That shortage means with almost certainty my colleagues and I are going to be exposed to COVID-19… and healthcare workers are one of the groups at the most risk of being put in the ICU and/or dying, because we’re directly exposed to huge viral loads when we’re with these very sick patients.

That means we’re going to have to change a lot of what we do. We’re already being told that unless we have “an aerosolizing procedure” to do (something that’ll cause a patient to spew a fine mist of pure virus particles), we use the bare minimum of PPE. Not because of any discovery that less protection is appropriate; leastways, nobody has shown me any evidence-based research on why suddenly less is a-okay. It’s because we just don’t have enough. So we stick with surgical masks, not N95 masks. Normal neoprene gloves. Maaaybe a paper gown a couple millimeters thick. Lots of soap and water. And prayer.

For the big stuff, like when we intubate patients- putting a breathing tube down their throat to put them on a ventilator- we need to be garbed up, and do the procedure verrrryy carefully. Which is great… as long as our limited supply of PPE lasts for those procedures… and as long as nobody needs emergent intervention- like, they’re dying, right there, and we have to run to save them. Because getting fully gowned up can take as long as 5 to 10 minutes, to do it by the book.

So if someone “codes”, hopefully they can survive at least that long while our code team gets gowned up and ready to go. Otherwise, it’s the nurses and docs and respiratory therapists and EMTs who are deciding whether to risk our lives by not wearing enough equipment to try and save somebody else’s. Because proper CPR? Ho, buddy, that’s an aerosolizing procedure.

And good luck to any bystanders, firefighters, or paramedics who want to do CPR on someone- at least we’re in a hospital, with (theoretical) access to protective equipment and first dibs on whatever manages to come down the pipe. Out in the field? Hah! They have it even worse than we do.

But it’s not just that. How about people with chronic asthma, especially kids? We usually give them breathing treatment, aerosolized Albuterol, helps open them up. But now that’s just a recipe for spewing virus absolutely friggin’ everywhere, especially knowing that perhaps 90% of people with COVID-19 are asymptomatic. So we go back to having them use just a regular inhaler/spacer and hope to Christ it works on ‘em. So while you might not see kids put in the ICU or die from COVID, I’m terrified it’ll happen because we can’t treat them as aggressively as we’re used to.

That’s just one small example of a dozen I can think of. In the end, though, we’re just going to say “Fuck it” and save the patient however we can. Young, old, it doesn’t matter. We’re going to do whatever it takes.

And expose ourselves in the process. And not just a little exposure, like if you accidentally touch a doorknob with someone’s COVID snot on it. I’m talking a viral load potentially seven orders of magnitude higher- the difference between drinking out of a water fountain versus a firehose.

Young people are getting sick and dying, too. I dunno what this “young people are invincible” shit is. Now, if you’re a woman under 35, you’re as close to invincible as it gets- we think. This video discusses some of why that is, and why you’ve heard admonitions against using ibuprofen and other things like that. Still, it’s way too early to know a lot of that for sure; a lot of guessing at this point on what’s helpful and what’s not. Even so, South Korea found that eleventy billion young folks with no symptoms are carriers that spread that stuff to everyone else. Thus, without the right PPE, the person I’ll get exposed to COVID from will be an asymptomatic 25 year old who was too fuckin’ cool not to go to that frat party or bar meetup, who’ll come in for a different complaint and just infect the shit out of everyone. Thank God we at least canceled schools, with as much as little kids are germ factories.

I’ve sort-of become fatalistic about it, and figure I probably won’t make it through all this.

You know, one of the biggest reasons I ran for office here in Virginia was watching how many of my brothers and sisters- the ones who hold the line against everything else to keep our society safe- were destroying themselves in the process. This is that same problem, it’s just now it’s going a hundred miles an hour through a school zone, on fire.

It’s just what we do. It’s not like we’re going to stop… especially now.

I have made a strange sort-of peace with it, because nobody cares. Oh, I mean- some people care. You probably do, reading this. But you can’t use the Defense Production Act to turn around in an emergency and make enough PPE to protect us. The only person who can do that doesn’t give a shit about us. His comments about only invoking it if he needs to makes Donald Rumsfeld’s “go to war with the Army you have” comments look quaint… almost endearing, in fact.

I guess the thing that makes it harder is that my wife (also an ER Nurse) and I are doing prep work to stay away from our kids. We own a camper, but instead of taking the kids camping, sounds like we’ll be using it to isolate ourselves away from our children, our parents, and everyone else- so we can keep them safe.

I just figured if I ever had to kick it for some reason, I’d be able to give them one last hug, right? Heh.

No time to dwell on it. Too much to do. Too much to plan. Likely months of mandatory overtime, making decisions that were the sole domain of a theoretical scenario straight out of a Philosophy 101 class just a month ago. We’re not going to get any guidance on the tough decisions coming, either; no way anyone in leadership anywhere in the country will communicate what decisions we should make and when. They sure as shit don’t want to take responsibility for it. Another time when they’ll ask us to take it on the chin so they don’t have to.

I am somewhat annoyed that I spent $2500 just under a month ago, money I’d saved carefully over the last year, to book a trip for the kids and I to Glacier National Park this summer. I wanted them to see it before it became just “National Park” from global warming. I’m sure that trip is probably up in flames even if I do manage to survive- though compared to what other folks are going through insofar as hardships go, I can’t muster anything more than a Marge Simpson-esque noise of disapproval. Hell, at least I have a guaranteed source of job income for as long as I’m alive and kicking.

And, like I said, I find it unlikely I’ll make it there, anyway. Along with too many of my brothers and sisters in emergency services. Running toward danger is too ingrained in what we do; who we are.

At least I’ll go down fighting with them to make things better for as many people as we can.

People I’ve told this to will chuckle nervously, not sure if I’m serious at first. Stunned, I suppose. They ask me what they can do to help me?

Nothing at this point, unless you can help find us homemade blueprints for how to make PPE, or wave a magic wand and start emergency production about two months ago. That’s when we needed the federal government to step up. We needed competent leadership when it mattered the most.

The competent leadership we have was on it immediately; Congresswoman Abigail Spanberger (who isn’t even my rep!) responded almost immediately when I contacted her office about my concerns, and this was in late February. She took everything I said very seriously, and promised to bring my concerns to the Vice President for her meeting with him. The state representatives and senators I talked to took it very seriously, but didn’t seem to comprehend the magnitude of what was coming. And to be fair, there is only so much they can do at the state level. This is when we need competent federal leadership the most, a “we’re all in this together” attitude while using the power of what we can all accomplish together to keep moving forward.

The cost we’ll pay for that delay is in lives. No way around it now. Only question is how many… and who.

What you can do in the meantime for folks like us is to take care of the less fortunate around us. I’ve long thought we were living in a new gilded age, and I think we’re about to find out just how true that was. Me, at least I have a job with which I will have a bajillion hours of mandatory overtime over the next God knows how long.

Scream about what we need to do our jobs to anyone and everyone who’ll listen- but then make sure you’re helping each other. Stay out of the ER if you can help it. Work to rebuild our society into one where we never have to do this, or go through this, ever again. We will get through this; we absolutely will. The cost will be enormous, but with hard work and sacrifice we can and will come out of this a stronger and better society than ever before.

And make sure to hold the people who enabled this clusterfuck accountable for what they’ve done. Make sure they pay for sending us in to hold the line with our lives, because they couldn’t be bothered to be ready or prepared.

Love you all. God Bless.