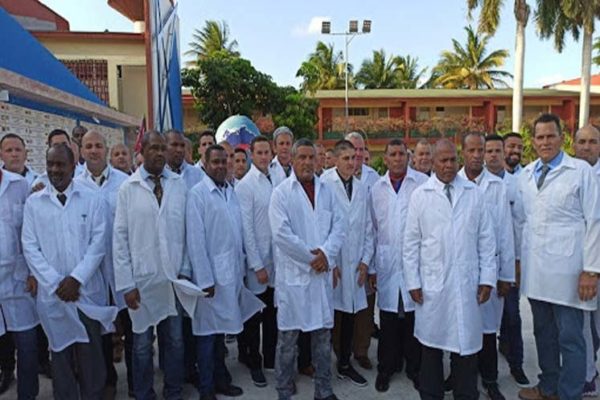 A Cuban medical team made up of 52 health professionals, some of whom with experience combating ebola in Africa, arriving on Sunday in Italy to help fight Covid-19 in Lombardy, the most hardly hit city.

At the farewell on Saturday, the Minister of Public Health, Dr. Jose Angel Portal, conveyed messages from the First Secretary of the Communist Party of Cuba, Raul Castro, and from President, Miguel Diaz-Canel, urging them to take good care of themselves and accomplish their important mission.

This is the sixth Cuban team to join the fight against the pandemic in the world and the first to travel to Europe, reported Cuban Television.

On Saturday, another 144 health workers belonging to the Henry Reeve contingent, specialized in responding to disasters and major epidemics, left for Jamaica to join the efforts to control and confront the new coronavirus on that Caribbean island.

The group is made up of doctors and nursing graduates from all over the country, 70 percent of whom are women, according to Cuban Television.

The brigade will join the 40 Cuban health professionals who arrived in late November in Jamaica to provide services on the island for three years.

During the delegation’s farewell in Havana, the head of the Cuban medical team, Eduardo Ropero, highlighted the joint commitment to support that Caribbean nation in stopping the pandemic, which affects most countries in the world.

Cuba’s collaboration with Jamaica in health matters began in 1976, with a brigade of 14 doctors, under the technical cooperation agreement in force between the two countries, according to the Cubaminrex website.