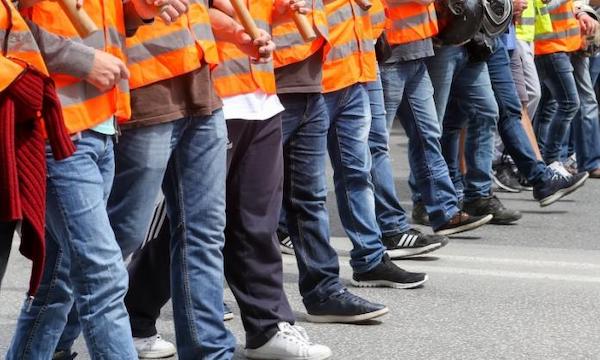 The Marxist argument that it’s the labour of workers, and not the supposed intelligence and entrepreneurial spirit of bosses, that keeps society running, has long been ridiculed by defenders of capitalism. In the conditions created by the COVID-19 pandemic, however, the truth of Marx’s claim has been brought into sharp relief.

Those whose work has been deemed essential under the current restrictions aren’t the CEOs, bankers, mining executives–or the politicians who serve them. It will come as no surprise, perhaps, to anyone but themselves, that these so-called wealth creators can spend months isolated in their mansions or country estates without this having any impact on the basic functioning of society.

We’re told that corporate bosses like Qantas CEO Alan Joyce and mining magnate Gina Rinehart deserve their immense wealth because they play a special role in the economy. Typical of this perspective is the argument made by Forbes columnist and “leadership strategy” expert Rainer Zitelmann in a 2019 article. “For entrepreneurs, who usually earn far more than top-tier managers, high earnings are usually a reward for particularly good ideas”, he wrote.

The richest people in the world are those who have the best ideas.

The ideologues making these arguments want us to believe that workers are unimportant and replaceable–nothing more than a “human resource” to be exploited at the whims of the capitalists. If you’re a worker, they think, it’s because you’re not smart, creative or driven enough to have climbed through the ranks. That’s why you deserve low wages, poor job security, a shitty education in chronically underfunded schools and a lack of decent health care.

The COVID-19 crisis has torn this argument to shreds. The global economy is grinding to a halt because many workers have to stay home. The CEOs self-isolating in their mansions can do nothing to save the situation. All their supposed creativity and intelligence is useless without the labour force that their wealth was built on.

The actions of our political leaders confirm this. The only creative and intelligent thing they’ve thought of to do to stave off the prospect of a deep recession is to keep as many workers as possible at their posts–recklessly sacrificing our health to protect the profits of their corporate masters. Prime minister Scott Morrison gave the game away when he said in a press conference on 24 March that while all “non-essential” workers would be sent home “everyone who has a job in this economy is an essential worker”.

As Morrison put it,

It can be essential in a service whether it’s a nurse or a doctor or a schoolteacher, or a public servant who is working tonight to ensure that we can get even greater capacity in our Centrelink offices, working until 8:00pm under the new arrangement in the call centres, these are all essential jobs. People stacking shelves–that is essential.

When the basic functioning of society is on the line, it’s not the Alan Joyces or Gina Rineharts who are deemed essential. It’s the shelf stackers. Without workers, the capitalists are nothing.

The flipside of this equation is expressed in Marx’s description of the working class as the gravediggers of capitalism. Workers are the engine that keeps society running. When our labour stops, society comes to a halt.

Already, in the context of the COVID-19 pandemic, we’ve seen numerous examples that illustrate this potential. Thousands of Italian workers in the auto and metal industries have walked out in wildcat strikes to enforce social distancing, refusing to risk their health and the health of their families for Italian prime minister Giuseppe Conte. Conte had made clear his desire to keep profits flowing despite the country having a 10 percent mortality rate from COVID-19 infections–tweeting on 14 March that “Italy doesn’t stop”. Workers, however, had other ideas.

There has even been some action by workers here in Australia. Early in the morning on 27 March workers at a Coles warehouse in Melbourne’s western suburbs walked out in protest management’s refusal to provide adequate protective equipment. The industrial power of these workers is immense. A three-day strike at the same warehouse in 2016 resulted in supermarket shelves across Victoria and Tasmania lying empty for weeks.

Workers have the power to prevent capitalists exploiting our skills as pickers in warehouses, shelf stackers in supermarkets or as truck drivers. In a world without bosses, we could collectively and democratically decide how our skills should be used to advance the interests of everyone. We could distribute food, for example, according to human need. This would end the barbaric reality that exists under capitalism, where millions starve to death every year despite enough food being produced to feed the world 1.5 times over.

We could use our skills as construction workers to rapidly build hospitals, rather than, as this the case today, endless luxury apartments and shopping malls for the rich–so that in any future health crisis no one would be forced to go without a bed.

Working class solidarity, democracy and collectivity: these are building blocks of socialism. Socialism is a society in which workers can democratically decide, using all our skills and creativity, what kind of world we want to live in, rather than allowing a wealthy minority of capitalists to run society in the interests of profit. The bosses need us. We don’t need them.

Right now, capitalism is in crisis. Workers have more power than ever, but we’re being forced into more barbaric conditions every day. To quote German revolutionary Rosa Luxemburg, writing in the context of the of the epochal slaughter of World War One, we now stand at a crossroads,

Either transition to socialism or regression into barbarism.