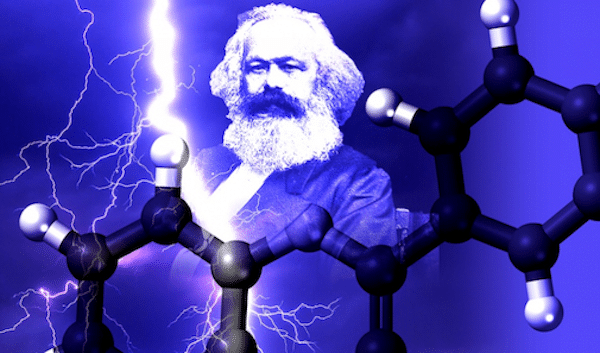 What is the ‘metabolic rift’?

“METABOLIC rift” is a term derived from Marx’s description of the fundamental shift in the relationship between our (human) species and the rest of nature which developed along with class society, especially capitalism.

“Metabolism” for Marx, signified the whole of nature and its interdependent processes, of which humans were necessarily a part.

Humans live from nature, ie: nature is our body, and we must maintain a continuing dialogue with it if we are not to die.

To say that humanity’s physical and mental life is linked to nature simply means that nature is linked to itself, for humans are part of nature.

And in his notes for Capital, later assembled by Engels as Volume 3, Marx declared that capitalism had severed that link, to produce “an irreparable rift in the interdependent process of the social metabolism, a metabolism prescribed by the natural laws of life itself.”

Today, if, alongside our necessary outrage against the environmental devastation caused by capitalism, we indulge in the luxury of a longer-term perspective on human development, we might use the term “ecological” rather than “metabolic.”

But the term “ecology” (German: “oekologie,” from the Greek: “oikos,” meaning “house” or “home”) wasn’t invented until 1869 (by the German zoologist Ernst Haeckel).

Marx used the term “stoffwechsel,” itself only in general use from the 1840s, and its translation into English as “metabolism” wasn’t in use until 1878, so Marx and Engels were well ahead of their times, linking their own work on the development of human society to advances at the cutting edge of science.

Neither Marx nor Engels carried out original scientific work themselves and neither claimed their work to be in any way similar to the natural sciences.

Marx, for example, declared that he had used the term “scientific socialism” “only in opposition to utopian socialism” and Engels’s pamphlet Socialism, Utopian and Scientific was written with the same aim.

But both were hugely interested in the scientific advances of their time.

Marx’s own research for Capital included a study of Justus von Liebig’s work on agricultural chemistry.

Liebig was interested in the role of chemical elements in plant growth and he pioneered the study of nutrient cycling (including the carbon cycle).

He promoted the manufacture of inorganic fertiliser but he was also concerned about the depletion of soil’s organic matter and argued for the recycling of human sewage.

Engels was particularly influenced by his close friend in Manchester, the “Red Chemist” Carl Schorlemmer, whose address he used to avoid police opening his letters.

Schorlemmer—Marx nicknamed him Jollymeier because of his sense of humour—was one of the foremost organic chemists of his time.

His influence, with Liebig and others, was almost certainly pivotal in Marx’s concept of the metabolic rift.

Marx and Engels’s work in turn influenced that of Vladimir Vernadsky, a pioneer of environmental science and one of the first to recognise that the oxygen, nitrogen and carbon dioxide in the Earth’s atmosphere result from the activities of living organisms.

Vernadsky’s development of the biosphere concept (whereby Earth processes are the product of interactions between living and non-living entities) and—along with the anarchist geographer Jacques Elisee Reclus and, later, the Jesuit geologist philosopher Pierre Teilhard de Chardin—of the idea of the “noosphere” (whereby human consciousness comes in turn to have a determining planetary influence) prefigured many of today’s ideas about human responsibility for the Earth.

Extraordinarily, Vernadsky was a virtual unknown outside the Soviet Union until his book The Biosphere appeared in English in 1997. His insights had to be rediscovered independently following the growth of environmental awareness from the 1960s.

Reclus’s notion of humanity as “nature becoming aware of itself” can be critiqued as teleological (explaining things in terms of the assumed purpose they serve rather than the processes whereby they arose) but it is nevertheless a powerful moral precursor of today’s growing environmental consciousness.

The tradition was continued in the second half of the 20th century by individuals such as the Marxist biologist Barry Commoner, whose 1971 book The Closing Circle with its “four laws” of ecology was one of the first to promulgate the idea of sustainability to a mass public.

More recently, writers such as John Bellamy Foster and Paul Burkett have built on the ecological aspects of Marx and Engels’s own work, arguing that it provides the basis for a truly green socialist theory.

And the journal Capitalism Nature Socialism, founded in 1988 by the Marxist economist James O’Connor, has promoted an “ecological Marxism” that has major implications for the struggle for socialism.

Just as environmental activism doesn’t automatically lead to class awareness and socialist consciousness, so socialism is not an automatic solution to the environmental crisis.

But it is an essential prerequisite for any long-term resolution. Marx declared that communism,

But he understood, as Marxists today understand, that we cannot wait for such a theoretical, literally “utopian” solution. Capitalism’s economic and environmental crisis is upon us, now.

Following Labour’s defeat in the 2019 elections, it is clear that progress towards a green socialist future requires a much broader left movement, rooted in the labour and trades union movement, in local communities and in wider popular concern for the environment.

Like other proposals for a “green and just transition” from the TUC to environmental NGOs such as the World Wide Fund for Nature, the Labour Party’s 2019 manifesto proposals for a green industrial revolution—a version of the green new deal promoted by European left and Green parties in response to the financial crisis—emphasises environmental sustainability alongside equality and social justice.

It falls well short of a fully socialist programme but would nevertheless have been bitterly contested by the beneficiaries of power and profit whose interests it challenges.

Following Labour’s defeat it is important that it remains the focus of debate and campaigning.

The coronavirus (Covid-19) pandemic is a reminder, if one were needed, that humans are part of a much wider living world of non-human species and ecosystems.

The relation between capitalism, socialism and the environment is by no means settled and is (along with many other topics) a developing area of Marxist theory and practice. It is one with which we can all engage.

In the meantime just like austerity (capitalism’s “solution” to its economic crisis) capitalism’s onslaught on the environment—from global climate change through drought and desertification (as last summer’s heat wave demonstrated, not just in the “developing” world) to traffic pollution and the loss of urban green space in our cities—bears disproportionately on “the many,” impoverishes us all, threatens to destroy our planet, and makes the struggle for a sustainable, socialist alternative all the more urgent.