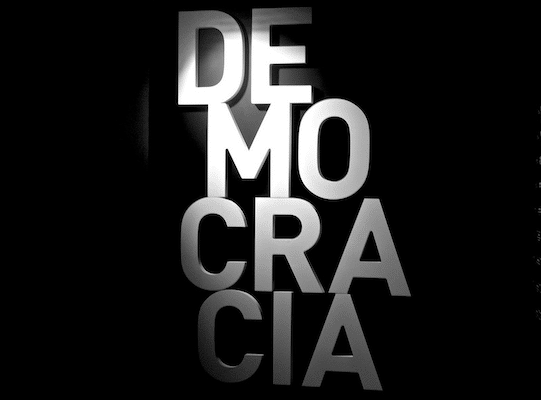 GOOD question! Look up the term in a dictionary and you’ll find a definition something along the lines of “an ideology that advocates or supports political, social and economic interventions to promote social justice within the framework of a representative democracy and capitalist economy.”

Most “social democrats” (such as members of the Lib Dems today) would agree with that.

Social democracy often presents itself as a “centrist” movement, opposing what it labels the “extremes” of left as well as right.

In 1981 a group of dissident Labour Party MPs and former MPs led by Shirley Williams, Roy Jenkins, David Owen and Bill Rodgers—the “Gang of Four”—broke away from the Labour Party to form the Social Democratic Party (SDP).

The move was precipitated by Labour conference resolutions in favour of unilateral nuclear disarmament and withdrawal from what was then the European Economic Community (later, the EU).

However, the underlying issues were ideological; whether capitalism needed to be transformed or could simply be reformed.

Immediately after its formation the SDP formed a coalition with the Liberal Party. Owen, two other MPs and a minority of party activists formed a breakaway group under the name of the SDP immediately afterward.

In 1988 the SDP-Liberal Alliance rebadged itself to become today’s Liberal Democrats.

Meanwhile the breakaway SDP formally dissolved itself in 1990, but small groups of activists continue to contest elections in the name of the SDP which today has a handful of local councillors and (up to the end of last January) one MEP (a defector from the UK Independence Party).

The SDP’s slogan is “The Common Good in the National Interest,” its website declaring: “We represent neither capital nor labour, not private industry nor the public sector, but only the welfare of the British people and residents of these islands.”

The 1981 SDP wasn’t the first political body to define a form of social democracy, however: this most recent iteration is very different from the complex historical trajectory of social democracy in the late 19th and early 20th centuries.

Marx and Engels were both closely associated with the Marxist Social Democratic Workers’ Party of Germany (SDAP); Marx’s Critique of the Gotha Programme (1875) was written in opposition to its proposals to limit its demands in exchange for concessions from the government.

These proposals were adopted and subsequent “revisionism” led in due course to what is today’s German Sozialdemokratische Partei Deutschlands (SPD).

The SDF’s Clerkenwell Branch—“Branch No 1”—met in what is now Marx House on London’s Clerkenwell Green which had by that time become a centre of radical activity.

Karl Marx’s International Working Men’s Association (the First International) had met at “number 38”—then a coffee house forming the east wing of the building which had been divided into a number of units.

The SDF had an explicitly socialist policy and is often described as a Marxist party, although Engels refused to join and would have nothing to do with it, partly because of political differences, but mainly because of its domination by its authoritarian founder and funder, the businessman HM Hyndman, a political opportunist.

In 1891 the SDF established the Twentieth Century Press as a printer for its journal Justice: Morris arranged for the Press to move into no 38, guaranteeing the first year’s rent, and in 1893 a printing press was installed.

The following year the SDF split, partly over Hyndman’s autocracy and anti-semitism and ideologically over his emphasis on a “parliamentary road” to socialism, downplaying trade unions and extra-parliamentary organisation.

A majority of its council, including Morris and Eleanor Marx, resigned to form a new organisation, the Socialist League, supported financially by Morris and initially also by Engels who welcomed the split.

Morris was clear that capitalism would not allow itself to be dismembered peacefully and that it would require a revolution, led by a revolutionary party; his News from Nowhere was written specifically as an answer to those who saw the “transition to socialism” not only as peaceful, but the result of a consensus, secured by an appeal to common sense (the attitude of Fabianism today).

The Socialist League was finally disbanded in 1901. The rump SDF continued to occupy what was now a combined 37 and 38 (ie Marx House today, publishing Justice and also from April 1901 to May 1903, 17 issues of Iskra (“Spark”), the illegal journal of the Russian Social Democratic and Labour Party (RSDLP) which was edited by Lenin, who shared an office with Justice’s editor, Harry Quelch.

The SDF survived defections of its right and left wings to other organisations and eventually in 1911 united with other radical and Marxist groups including branches of the Independent Labour Party (ILP) to form the British Socialist Party.

The BSP in turn saw the defection of its right-wing pro-war elements and, following the 1917 Bolshevik Revolution and the end of the first world war, it became an explicitly revolutionary socialist organisation, culminating in 1920 with the formation of the Communist Party of Great Britain.

So social democracy has a complex history. But subsequent to the end of the second world war, and particularly following the collapse of the Soviet Union, social democracy has increasingly become identified with “managed capitalism” associated with Keynesian economics and a mixed economy dominated by the market.

Conflicts within British social democracy today are generally not about broad ideology but rather concern specific issues (such as Brexit).

The tiny SDP is anti-EU, and emphasises the nation state and the family as the foundation of society.

Together with the pro-European Lib Dems and with sections of the Labour Party all these groups present themselves as advocating social progress within the existing capitalist system, though with “left” and “right”—or perhaps better, “ideological” and “populist”—variants.

As such, social democracy presents itself variously as an alternative to socialism or as representing some form of compromise between socialism and capitalism.

Central to social democracy is a false view of the state as somehow neutral; the “honest broker” of different economic and social interests.

Its vision of socialism is always ideal, utopian—and therefore essentially unobtainable; and of capitalism, as reformable, capable of being made to work in the interests of “the many.”

This in turn leads to a denial of class struggle and a focus on Parliament as the main, if not the only, vehicle for social progress.

Marxists, by contrast, see the state as, ultimately, the guarantor of the status quo and capitalism as inherently exploitative.

Achieving socialism will therefore need to involve extra-parliamentary organisation and struggle as well as electoral participation.

In Britain, social democracy is less embedded in the trade union and labour movement than in other European countries where political parties bearing the name “social democratic” play a stronger role in politics.

For trade unions this is to some extent a strength in that, focused on protecting workers against excessive exploitation, dangerous working conditions, redundancy, bullying and harassment, and on more proactive action on wages and terms and conditions of employment of their members, they can appeal across a wide spectrum of political views.

But this has also held back the ability of the Labour Party, which was formed by trade unions which continue to be a major source of support and funding, to develop policies which directly challenge the structure of capitalism and the hegemony of capitalist ideology.

Today while the Labour Party has at last, hopefully, rejected the neoliberalism of the Blair years, the battle—between social democracy and socialism—remains the main source of contention within the party and within the wider labour movement.

This answer (number 60 in the series) was collectively edited by participants in the Introduction to Marxism series at the Marx Memorial Library and Workers’ School. Previous answers and details of all MML’s courses and lectures can be found at tinyurl.com/FullMarx.