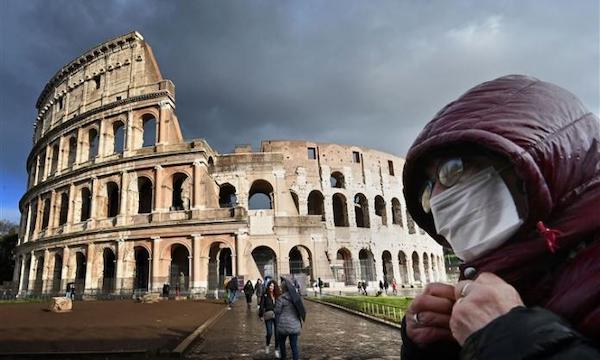 Capitalism is killing us. We have to destroy it

COVID-19 has challenged humanity: on what principles do you organise your society? The pandemic could have been defeated by cooperation, planning, transparency, and social solidarity. But instead, it was born into a society based on competition, secrecy, lies, and greed.

Yes, capitalism is to blame for this crisis: capitalism brought us COVID-19, spread it around the globe, created a healthcare system and a political culture that could not respond to the threat, and now threatens a global economic crisis that will only intensify the danger, the misery, and the fear.

Capitalism has connected the world–all the better for infectious diseases to spread to every continent in just a few weeks. But it has also wiped out any capacity to collectively plan on any scale, let alone internationally. It’s created a world totally governed by the chaotic forces of competition for profits and for military advantage: where our rulers can plan decades in advance when it comes to weapons of war, but can’t plan a few months in advance for disease control.

The United States, the leading power of the capitalist world, destroyed its own pandemic control agency–but has a good $US 1.7 trillion invested in modernising and upgrading every aspect of its nuclear weapons stockpile over the next 25 years, to prepare for war with China and Russia. Instead of plowing investment into vaccine and pandemic-control measures after close calls with H1N1 and SARS, capitalist governments around the world got back to business as usual: building up their military, protecting their profit margins, and leaving the rest to fate.

Right now, medical experts are performing frightening arithmetic: the number of expected pneumonia cases against the number of available ventilators and hospital beds. Managers of armaments companies, who control enormous advanced manufacturing plants distributed around the entire world, can carry on counting their profits.

We must end this system that, with all its technological capacity, can plan how to kill us in our billions, but can’t plan to keep us alive.

Capitalism turned China into the world’s factory, with a population of a billion driven from the countryside and into the immense metropolises, governed by an authoritarian managerial state whose overriding directive is to keep up the cheap production of commodities to satisfy the world market. The initial virus outbreak was met with the censorship and dishonesty that have made China’s factory system so indispensible to world capitalism. By the time the truth was acknowledged, COVID-19 was already on its way around the world. Now China’s workers face being sent back to their mega-factories, so the flow of profits can resume as quickly as possible.

Capitalism organised the world into a system of states competing with each other for military advantage. The Iranian government has blown to smithereens hospitals throughout Syria; the U.S. has done likewise in Iraq and Afghanistan. Now the U.S. sanctions on Iran, one of the countries worst hit by the epidemic, have prevented Iranian doctors and healthcare officials from accessing the online central databases tracking the disease’s international spread. The U.S. can’t share its data with Iran, and it won’t send help, but it can send its spy satellites–after all, that makes warfare easier. Those spy satellites are now revealing the mass graves being dug around Iran’s worst-affected cities.

The Western capitalist press sneered at the mendacity of their Chinese rivals, even though Western capitalists rely on the tyranny of the Chinese political system to ensure cheap labour for their production processes. But lies and irrationality are not a problem unique to Chinese state capitalism. Now COVID-19 is taking root in the neighbourhoods of U.S. metropolises, and Western “democratic” capitalism isn’t looking so great either.

In much of the West, the misery caused by the last financial crisis has, with many twists and turns, led to the flourishing of an openly anti-scientific and conspiratorial form of politics exemplified by Donald Trump. After years of practice denying the reality of climate change, Trump and his right-wing “populist” co-thinkers have now encouraged full-flight virus denialism among their supporters: according to polls, U.S. Republicans are far more likely than other Americans to disbelieve in the seriousness of COVID-19.

No matter how their response changes in the days and weeks to come, in the crucial early weeks figures like Trump have focused exclusively on artificially propping up the economy and the stock market with bravado and lies. Keen to keep the Brexit economy ticking, Trump epigone Boris Johnson experimented for a while with a cheap laissez-faire alternative to intervening in the economy: letting things roll on, to infect as many Britons as possible and promote “herd immunity”. It is working class people who will pay the price for this bravado, many with their lives.

Are capitalism’s technocratic “moderates” much better? As the epidemic crept into the United States, the political establishment there had just celebrated their greatest political triumph in years–they never managed to get rid of Donald Trump, but they did finally deal a knockout blow to Bernie Sanders for daring to suggest America might benefit from a semi-rational healthcare system. Mission accomplished: those “Obama-Biden Democrats” who have laboured mightily to defend America’s for-profit healthcare will soon be able to see their beloved system in action.

Here in Australia, it was easy enough to mock the now infamous disaster-denying Pentecostal Prime Minister Scott Morrison, who managed to delay the ban on public gatherings until his favoured Hillsong church had finished their big conferences over the weekend. Morrison is a fire-and-brimstone True Believer, and his increasingly deranged political party relies on Christian extremists as a base of active mass support for their pro-business political project. But Victoria’s much-admired socially progressive technocrat, the premier Daniel Andrews, was much the same.

Andrews refused to intervene to stop the mass gathering at the Formula One Grand Prix in Melbourne. In the end, the race wasn’t called off by organisers until after the last minute–hours after the scheduled start time. By the time the cancellation was announced, thousands of fans had been queuing inclose proximity for hours. After all, there was a lot of money in that race, and in a world based on economic competition, who wants to be the first to cancel your big money-spinning events?

Profit, competition, inequality and lies have turned the novel coronavirus into a growing global catastrophe. Each day, and now each hour, brings more news of closed borders, closed cities, collapsing hospitals. And in the background, but looming ever closer, is the threat of an economic crash, as the profit mechanism–the system by which capitalism turns today’s wealth into tomorrow’s social organisation–begins to break down. Australia’s privately owned, for-profit ports only release their data once a month; but some members of the Transport Workers’ Union are already reporting an 80 percent decline in shipping. A market-based society converts natural disasters into economic implosions.

What more proof of the system’s irrationality could you need? Why accept a system that decimates us with a virus only to torment us with poverty afterwards?

The last economic crash happened just over a decade ago. Crisis changes politics. It shakes things up. Why accept the status quo, when it’s obviously breaking down? Crisis can force us to confront illusions. It can expose the powerful for what they are.

Now we face a new crisis in a world shaped by that very transformation.

Those right-wing populist forces have, in much of the world, become the “establishment”, while many left-populist challenges have exhausted their energy, with their electoralist politics having failed to really challenge the logic of global capitalism.

Let’s not let the system off the hook again. This time around, we need something fundamentally more radical: something that combines the mass struggle of the new social movements with revolutionary anti-capitalist politics based not on taking over and civilising the system, but on smashing it to pieces and replacing it with a new world.

COVID-19 was born into a world shaken by a prolonged earthquake of international struggle. In a three-day period from January 8th to 10th, a hundred thousand protested the ecological catastrophe of Australia’s apocalyptic bushfires, in national protests initiated by the organisation that publishes Red Flag, Socialist Alternative; the French working class hit the streets in national strikes reigniting one of the most significant workers’ movements of recent times; and Chinese scientists announced that the pneumonia cases in Wuhan were likely linked to a new strain of coronavirus. This virus is growing in a world ready to explode. For now, the pandemic’s main social effects are fear and isolation. Many crises first provoke a sense of powerlessness. But that will be only one side of the story.

Lockdowns, recessions, and pandemics frighten and isolate people, but they can also inspire resistance, solidarity, and hatred for the powerful. Residents of Wuhan, locked down in their tower blocks, took to their balconies to chant “add oil”–the slogan of the mass movement in Hong Kong that challenged the Chinese Communist Party. That was, in turn, inspired by the Chileans who had chanted and sung leftist songs from their balconies during the right-wing government’s “silence curfew” intended to curb their protests. Now the singing has spread to locked-down cities in Italy, where already a wave of strikes has broken out among workers furious that their bosses are demanding they carry on work in unsafe conditions.

The coming crisis is different from the crisis of 2008. It begins after a re-emergence of mass struggle, after neoliberalism had already been ideologically shattered by the last recession’s aftermath, after a revival of centre-left “populism” had already indicated its limits. And it comes after the rulers of the world have shown their absolute barbarity in their response to the last wave of struggle–their physical eradication of popular movements in the Middle East, their sadistic destruction of centre-left parties that tried to play by the rules and work through the electoral process, and their reconciliation with the new fascist-inspired right-wing movements that are increasingly given official roles in mainstream capitalist politics.

The days, weeks, and years to come will be unpredictable. Stability and chaos, revolt and calm, will surge and flow into one another as the system copes with its own crisis, and as the working class fights for its own survival. But world capitalism has proven that it is a system unfit to organise society any longer. So in this coming period, whatever happens, the most important thing anyone can do is devote themselves to building a revolutionary opposition to the system that has brought us to this point.