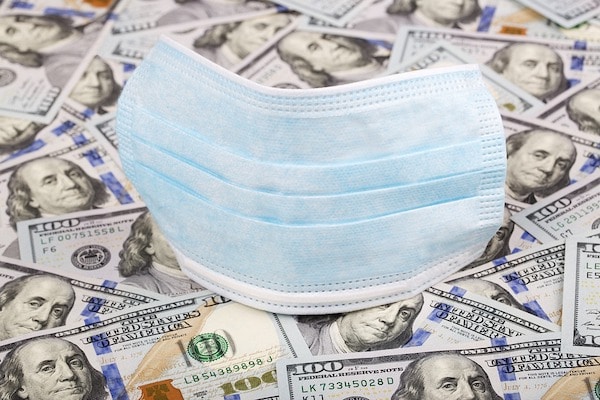 Congress recently passed a 1.5-1.7 Trillion dollar stimulus bill (as I wrote about last week, the reported headline number is including a useless accounting gimmick which provides no additional support to the U.S. economy). Part of the reason we can report such an exact number is congress budgets in exacts.Take a look at these two sections of the CARES Act, picked at random. 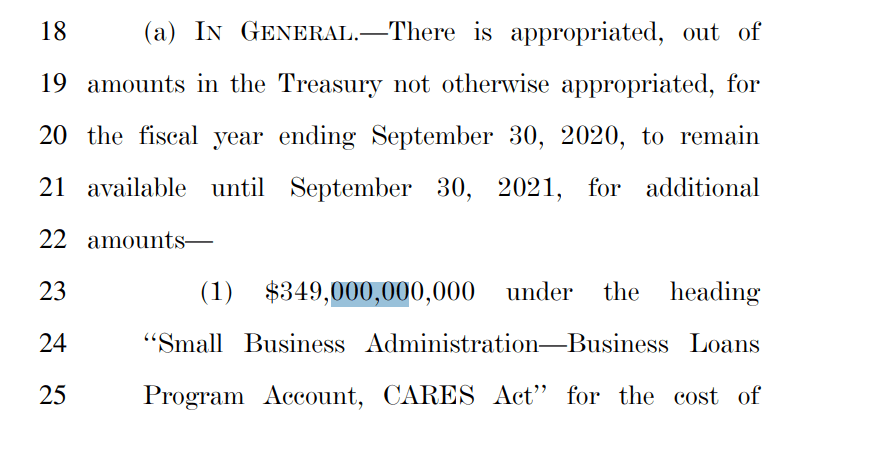 Where did these numbers (especially the Small Business Association loans number) come from? It’s hard to know for sure, but what we do know is this number wasn’t picked for any particular macroeconomic reason. The size of the forgivable loans in the Small Business Association program certainly wasn’t picked based on the enormous need small businesses have to make payroll and rent. What exactly is the purpose of capping the program at a specific dollar amount? When they run out of funds, is the need for small businesses to make payroll any less? Are those who get in their applications after the funds appropriated run out any less deserving of the funding to make payroll payments than the small businesses who got funds?

The reality, of course, is this program is likely to be extended. But when? And by how much money? Will the small businesses who need it now be able to wait for the extended negotiations over extending it?

In the best of times the federal government budgeting in specific dollar amounts was silly. Congress is attracted to this kind of budgeting because it suggests their capacity to exactly control how much the federal government is spending and thus (in theory) the deficit. As James Galbraith says, “The entire foundation of the budget process is built on an illusion of control”. You can’t actually control how much the federal government spends during the budgetary process because the budget has a large component of programs which rise or fall with incomes, poverty and unemployment. In crises, this obsession is actively dangerous because it is at this time that we need absolute security the most. In an environment of very heightened uncertainty, people need the utter certainty of uncapped programs with clear qualifying events. The economy will function better with these kinds of programs.

If we think that payroll protection (along with making rent and paying utilities) for small businesses is a worthwhile program then the federal government should create uncapped, mandatorily funded programs which establish an absolute legal right to access the program as long as the small or medium sized business qualifies. This is easier to communicate to the public, easier to solicit participation for and easier to prevent businesses from falling through the gaping holes. It also doesn’t create recurrent showdowns over extending funding that are pointless and stress the system more.

Of course, the other obvious uncapped program with mandatory funding that would see far larger take-up during this crisis is the Job Guarantee i.e. a legally enforceable, uncapped, right to a job. Now you may have all sorts of objections to such a program but it is important to recognize that it provides an administratively simpler and direct way to ensure low unemployment than a patchwork of programs which undergo annual appropriations from congress, get finite budgets and limited mandate (or capacity) to make systematic decisions. Crises like these reveal why advocates are so committed to a Job Guarantee. Congress inadequately funds reducing unemployment in the best of times. However, in the worst of times it does even worse as its programs are always far smaller than the need because they can’t bring themselves to authorize programs with such large price tags associated with them.

Congress is clearly proud it managed to spend a “2 trillion” dollar “stimulus” package in such a short amount of time. Yet this amount is clearly inadequate for the scale of the problem (with 4.5 to 5.5 million plus more weekly unemployment claims expected to be reported tomorrow), even if it weren’t inflated by the gimmick I discussed last week. Since the vast majority of the support to households is coming through unemployment insurance, we’re likely going to see unemployment rates of 25% or more for a very extended period of time unless congress finally responds very aggressively. We’re far shorter from the amounts of money I thought were necessary 2 weeks ago, but the reality is no one knows how much would need to be spent to keep people economically secure and keep unemployment down (even as people can’t leave their houses). The only way to get congress to spend adequately is demand programs without simple, single dollar amounts and shift congress away from obsessing about specific dollar amounts all together. Appropriations for specific budgets is so twentieth century. But if we’re going to cause this political sea change, we need to create it quick.