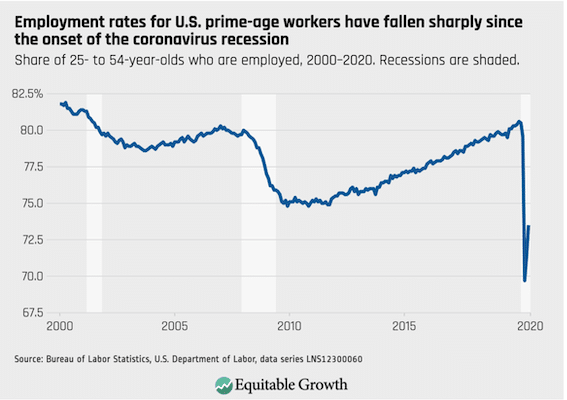 The most important economic problem the United States is facing is the failure to contain Coronavirus and the unethical decisions politicians have been making to reopen without the administrative capacity to limit the virus’s spread. I will not be writing about this problem today. Instead, this dispatch will focus on the second most important economic problem in the United States in July 2020- the looming expiration of supplementary unemployment benefits. Just as serious is the waning effect of other elements of the CARES act whose budgets were only good for a few months of support to businesses and sub-federal governments.. It really can’t be overstated how catastrophic this is. We are in an economic policy emergency. To understand why, we have to look at what has happened to unemployment.

To start with, look at this graph of prime age employment rates provided by Kate Bahn and Austin Clemens at the Washington Center for Equitable Growth.

While this is a graph of what the Bureau of Labor Statistics calls “prime-age workers”, those workers who are 25 to 54, these patterns are reproduced across all sorts of different measures of the labor market. The scale of the drop as well as the “bounce” is clearer in the Federal Reserve Economic Data (FRED) graph run by the Federal Reserve Bank of St. Louis, though it has not yet been updated with June data. I’m using the 15-64 year measure calculated by the Organisation for Economic Co-operation and Development, which shows that there is a similar (and appalling) 10% drop in labor force participation from the Coronavirus Depression.

Labor force participation has risen since April’s incredible cliff fall, but nowhere near enough to fill in the gap. The headlines on the June job market numbers have greatly shifted the narrative in ways that have made people complacent. CNBC’s headline enthusiastically extolled “Record jobs gain of 4.8 million in June smashes expectations; unemployment rate falls to 11.1%”. This has papered over the reality that unemployment is still at dangerous levels and the programs sustaining this already unacceptable level of unemployment are rapidly expiring. As has been widely pointed out on twitter, permanent job losses are rising.

On a monthly basis, this was actually the worst month yet for new permanent job losses. Nearly 600K pic.twitter.com/tg46MLvX7D

The May and June jobs numbers were always going to be a dangerous trap for media reporting on the Coronavirus depression. The Business press’s breathless horserace treatment of whether jobs numbers came in “above expectations” or “below expectations” is about predicting shifts in short-run market interest rates and stock prices, not about the informational needs of ordinary individuals (or even more foresighted businesspeople). Mainstream journalism repeats these framings practically verbatim and has not developed its own macroeconomic capacity (which it desperately needs). The CARES act went on a collision course with this market-oriented coverage because of Congress’s Payroll Protection Program and the great degree of uncertainty over how many jobs would be “retained or regained” because of it. The PPP program is literally paying companies to mechanically lower the unemployment rate so it’s not actually shocking that the unemployment rate fell.

Instead, what the May and June economic data tell us is that the Payroll Protection Program is too small to have the macroeconomic effects on unemployment that we want. For all the outraged coverage over companies getting money that “shouldn’t have”, the actual macroeconomic problem is that the PPP program is too small, Financial Institutions are “credit” intermediaries for it and the federal government still has not developed a framework to ensure further public benefits from public money going to putatively private corporations. As usual, David Dayen of the American Prospect is worth quoting at length on this topic:

Anyway, it’s odd that more attention hasn’t been paid to the fact that the list of loan recipients handed out by SBA, the only source material for a kajillion “investigative” reports, appears to have an indefinite amount of demonstrable errors. Several companies came forward to say they never applied for or received loans but were listed on the spreadsheets anyway. Somehow that hasn’t been investigated by these intrepid investigators (maybe because they don’t want to face the fact that the only data they used for their stories was corrupted).

I’d read those investigations. SBA merely had to provide a list and couldn’t get that right? How many names on the list are wrong? Were they included in SBA’s running tally of funds used? Did the first round close prematurely because of SBA errors in attributing loans to companies that didn’t get them? I guess journalism in context is too much to ask.

Happily though we won’t have this problem again, because the “look Ma Kanye West got a loan” reporting tendency has probably doomed any further relief for the small business sector. Democrats and Republicans in Congress are using the reports as an excuse to limit further stimulus, lest it fall into the wrong hands. I agree that firms who were supposed to be barred from receiving PPP funds and got them anyway is a bad outcome. But splitting the atom to ensure “responsible” recipients only will assuredly make it ineffective, especially if still run through self-interested banks. It’s HAMP all over again, and the media has become willing collaborators in the induced austerity. Fortunately we have the virus completely under control, so this won’t be a catastrophic mistake. [I’ve added italics for David’s sarcasm]

Trying to decide who “deserves” the money before the fact is a lot harder than clawing back money through taxes and clawing back economic coordination rights through public law. Putting aside alternatives to the current structure, it’s hard to imagine that the Payroll Protection Program will be able to sustain its effect on the unemployment rate which means sustained high levels of unemployment… if congress sustained its current support to the economy. 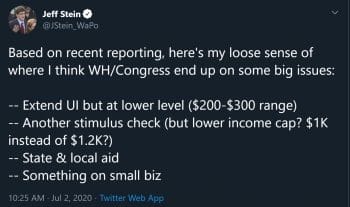 Whether congress will is in grave and dangerous doubt. The 600 dollar a week of federal supplementary benefits are in danger as it comes under attack for specious relative price arguments which I wrote about two weeks ago. The alternatives the Aspen Institute institute economists suggested are not administratively workable, at least not in time for August, so in practice “incentive to work” arguments will result in simply cutting the supplementary benefits arbitrarily all together. This is consistent with the reporting the Washington Post’s Jeff Stein has been producing:

More disastrously, Stein’s further reporting yesterday indicates that the Trump white house wants to arbitrarily limit the next stimulus package to 1 trillion dollars. This would mean no/tiny/narrow “stimulus checks” to households, less State & Local Government Aid and devastated educational institutions at all levels. All of that is in addition to cutting Federal Pandemic Unemployment Compensation. The problems are the same problems I (and many others) identified from the beginning stages of the Coronavirus Depression and they have not been resolved. Meanwhile, the rent is coming due. I will be writing about that in my next dispatch. 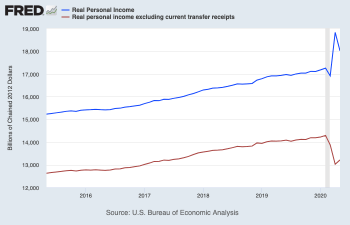 All these other elements are important but what’s most dangerous in the current struggles over the “next round” of stimulus is the cuts to unemployment insurance. Federal Pandemic Unemployment Compensation is a critical lifeline to the economy. It brings income to low wage workers and other precarious households (e.g. households with precarious independent contractor positions) that otherwise wouldn’t receive it, even if they weren’t newly experiencing unemployment. This has helped households support family members who have fallen through the cracks of relief measures as well as simply pay their bills. Removing the FPUC, or even cutting it by ½ or ⅓, would plunge these households into desperate financial stress. It’s supplementary unemployment insurance, along with the one-time stimulus checks, which actually increased disposable income in April. Once the checks dissipated disposable income fell in May. As the FRED chart shows, disposable income has a significant distance to fall with major cuts to unemployment benefits. To put it more simply- expanded unemployment insurance does a good job of insulating lower income households from the direct financial cost of job losses and congress should accept its success and continue succeeding at this critical policy goal.

Overall, congress has adopted an incoherent policy mix which helps households and businesses limp along but hasn’t mobilized the economy to beat Coronavirus or provision people while Coronavirus continues. They haven’t adopted enough payroll protection to generate low levels of unemployment nor have they fully committed to a “households only” rescue plan which would necessarily involve greatly expanding health care coverage and regularized emergency direct cash payments to households. Worst of all, the meager aid the economy does get has become a part of regular down to the wire meetings where the economy hangs in the balance in ways that resemble the increasingly recurrent debt ceiling crises of the last few decades. Establishing unemployment triggers for fiscal programs is an idea circulating among elite Democratic party economists (which is a good thing) but they appear to be dead in the water among Democratic congressional leadership. It is no exaggeration to say that life support for the U.S. economy is running out and the next few weeks are of critical importance to the lives of millions of people. First and foremost, it’s critical that the 600 dollar Federal Pandemic Unemployment Compensation remain intact. Without it, what are millions upon millions of households going to do?