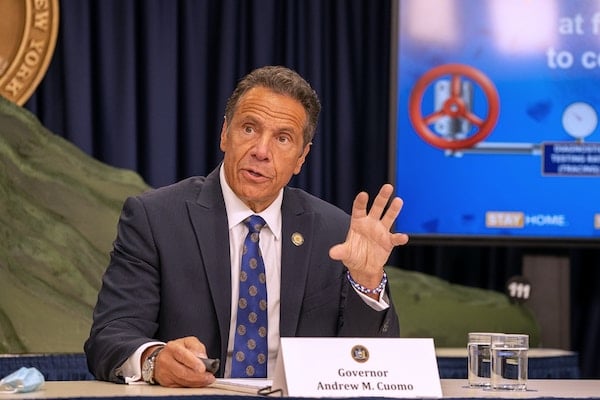 THE ADIRONDACK CORRECTIONAL Facility is tucked away in the mountainous North Country of New York State, less than a two-hour drive from the Canadian border. Three years ago, it was converted to incarcerate teens aged 16 to 17, automatically prosecuted as adults under pernicious state law. As of this May, in response to the coronavirus pandemic, all of the young people were transferred out of the facility: It will now serve as a nursing home prison.

In the last month, 96 elderly male prisoners have been transferred to the isolated Adirondack prison. New York Gov. Andrew Cuomo announced the plan as a way to ensure safety for aging incarcerated people, who are particularly vulnerable to COVID-19 complications. The northerly New York region has seen some of the lowest coronavirus rates in the state. But, as of Wednesday morning, at least one person incarcerated at the prison had already tested positive for the coronavirus, local news reported.

For family members and justice advocates, the prison nursing home presents no less than a potential massacre. And what’s more, many of these elderly incarcerated people are now further removed from relatives and loved ones than they had been in previous facilities.

In response to the pandemic, only one reasonable option was available to the governor and the prison system when it came to elderly people serving state sentences: Release them all. This would not have been benign; it would have been sensible. The recidivism rates are almost negligible for elderly individuals who have served long-term sentences. Instead, the state implemented an elaborate, cruel, and potentially dangerous plan to keep older people behind bars, in the distant facility. Given the racism undergirding our prison system, the implications for already oppressed Black elders must not be overlooked. The majority of men who have been transferred to Adirondack are people of color and over half are Black.

It also threatens to replicate the public health crisis experienced in nursing homes across the state.

Approximately 6,000 nursing home patients in New York have died from COVID-19 complications–a sign of intolerable elder neglect on behalf of the state. Meanwhile, when the virus has entered prisons and jails, it has ravaged incarcerated populations. While New York has seen a dramatic drop in case numbers thanks to statewide lockdowns, and while it is true that the North Country has thus far avoided the worst of the pandemic–and there have as of yet been no recorded cases at Adirondack Correctional–the risks posed by prison conditions remain unacceptable. Yet again and again, the state has chosen punitive and carceral solutions in the face of an urgent need for mass decarceration.

THE MORAL AND political imperative to mass decarcerate–for everyone, but especially for elderly incarcerated people–predated the pandemic, but has become all the more pronounced in its wake.

“If one man is Covid-positive, this could transfer their plan from a prison nursing home to a death camp,” said Jose Saldana, director of the Release Aging People in Prison Campaign, who served 38 years in prison himself. Saldana spoke on Monday evening alongside local activists at a small social-distanced press conference in front of the entrance to Adirondack Correctional Facility, which is hidden behind thick bushes.

Our communities need these elders. I’m one of them.

Within 48 hours of the press conference, the grim scenario Saldana named threatened to become a reality. On Wednesday morning, the Department of Corrections and Community Supervision announced an asymptomatic case of COVID-19 among the incarcerated people at the facility. “Our worst nightmare is beginning to come true,” said the Release Aging People in Prison Campaign in a statement.

Local activists from the surrounding region had joined the Monday event and stressed the need to end rural communities’ grim economic reliance on mass incarceration. “The North Country made a deal with the devil decades ago by agreeing to incarcerate mostly Black fathers, sons, and cousins,” said Martha Swan, the executive director of John Brown Lives!, a racial justice advocacy group in the North Country.

I appeal to my North Country neighbors not to turn your gaze away and get involved in this critical effort.

Dozens of organizations like Swan’s and Saldana’s are calling on Cuomo to grant clemency to everyone incarcerated at the Adirondack facility, and to minimally commute everyone’s sentences to allow them to appear in front of the Parole Board for a chance at release. Cognizant, however, of Cuomo’s negligent record on clemencies, advocates are also calling on state lawmakers to pass legislation enabling parole evaluations for prisoners over 55, as well as timely reviews and fairer decision processes for all those eligible for parole.

Since the pandemic spiked in New York, the Department of Corrections and Community Supervision has stressed that it has gone to great lengths to contain the virus in state prisons. There have been 1,249 releases to date in response to the health crisis, while long overdue testing ramped up last month. As of mid-June, only 3 percent of New York’s 38,000 state prisoners had been tested (over 40 percent of those tested were positive for COVID-19). More releases are expected, but remain vastly insufficient in scope, especially while initiatives like the prison nursing home are deemed acceptable policy. If this is what care for vulnerable individuals looks like under the carceral system, the need for its abolition should be lost on no one with a moral compass.

For the loved ones of the elderly, health-compromised men transferred to Adirondack, the move–of which they were given no warning–has been nothing but a source of deep concern. “I found out on the day he was moved,” said Darlene Vourtis-Mackenzie, whose 64-year-old brother, Edward Mackenzie, was transferred to the Adirondack facility.

My nerves have been shot.

Vourtis-Mackenzie told me that it would now take over 11 hours to drive to visit her brother, whose previous prison, Fishkill Correctional Facility, had been a four-hour drive from her Maryland home. She said that her brother has emphysema, alongside a number of other serious health conditions. He has been in prison since 1994, when he was convicted of drug possession, robbery, and kidnapping. He is serving 25 years to life under the punishing Rockefeller Drug Laws.

During recent calls from his new facility, Mackenzie told his sister that the prison is poorly suited to its new, older demographic. “The commissary is like a candy store. When he arrived, the law library was not even open,” Vourtis-Mackenzie told me. “I’m writing a personal letter to Cuomo,” she added, noting that her brother would be an asset to the community, with job offers and a safe place to live.

Instead, thanks to the twisted vagaries of carceral logic, her aging and sick brother is caged and isolated.

Update: July 8, 2020, 11:00 a.m.
This article has been updated to reflect that, on Wednesday, the New York Department of Corrections and Community Supervision announced a case of the coronavirus at the Adirondack Correctional Facility.