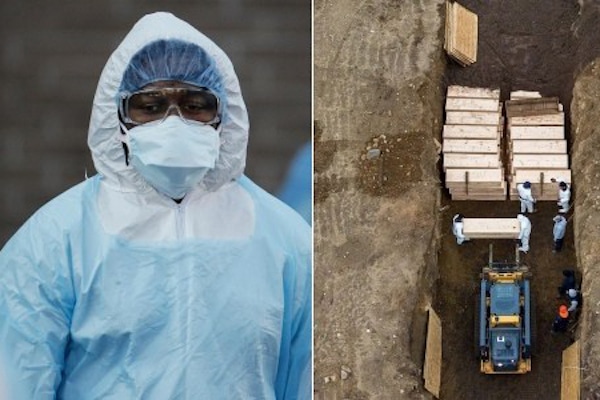 In the backdrop of the coronavirus (Covid-19) pandemic, Michael D. Yates, decades-long union activist, director of Monthly Review Press and former Associate Editor of Monthly Review magazine, discusses condition of the working people and steps required. The interview of Professor Michael Yates, whose academic fields include labor economics and the relationship between capital and labor, was taken on March 28, 2020 by Farooque Chowdhury.

For a long time, you have been working with unions, as an organizer, educator, and negotiator. Your works on class and labor are significant. Since the outbreak of the coronavirus pandemic, the working people in countries, from Thailand, the Philippines, India, Bangladesh to Italy, Spain, United States, in countries in Africa, have been paying the the price teh most. Already unemployment and uncertainties are staring in the faces of millions of the working people. We’ve seen the unprecedented exodus of hundreds of thousands of the working people running away in hoards, jumbling like animals, from Mumbai and New Delhi, from Dhaka. They stuffed trains in Mumbai, as if the people were goods being transported. They embarked on a hundreds of kilometers journey by walking starting from New Delhi. Among them were children, thirsty, tired. Later, authorities provided buses to carry them to their rural homes in the eastern parts of the state of Uttar Pradesh, India. They were fleeing from hunger, not from the pandemic. You are well aware of the condition the U.S. working classes are going through. In late-March, a teenage boy who tested positive for COVID-19 died in Lancaster, California, after being denied service at an urgent care center because he did not have health insurance. The system appears like a disjointed machine coming to a sudden, crushing halt. How do you find the condition of the working classes in this pandemic situation, when capital’s first job is to slaughter the working people?

The United States is being led by monsters who care not at all for the working people. Their deaths won’t matter a bit to criminals like Donald Trump and his government of boot-lickers and money-grubbers. Trump says that the U.S. was made for people to get back to work. In other words, to be exploited and now subject to disease and death. Some of his supporters have even said that older people like myself should be willing to die so that the economy can get moving again. We know that rich people, the capitalists who run the country, won’t be sacrificing their lives. They will be in isolated luxury and will get the very best medical care. While workers will get a measly $1,200 and some extra unemployment compensation, if they are lucky, the big corporations will have access to over 4  trillion dollars in bailout monies. We see that healthcare workers, grocery store employees (of whom my son is one, risking his health every day), construction workers, and many others do not have adequate or any safety clothing and equipment. And the millions now unemployed will soon enough run out of what little money they have. We can be assured that draconian laws and other measures will be and are being put in place now in case workers begin to rebel. And I am not even mentioning the homeless and the imprisoned, including all the detained immigrants. They are at greatest risk and will die in large numbers from the virus. These insane things are happening in the world’s richest countries. I can only imagine the horror stories in poor countries, where a few billion people live desperate lives in the best of times.

The really sad thing here in the U.S. is that there are working people who support Trump, who think the Covid-19 threat is a hoax or not that serious, who are all too ready to blame foreigners and other countries.

There are unions and working-class organizations doing what they can to combat the crisis. Just not enough. There are poor homeless mothers who are occupying abandoned houses so that they have shelter. Food banks and the like are being organized. All to the good. But too many years of stagnation of the labor movement and right-wing propaganda have taken a toll.

The capitalist system’s deity–profit–always takes toll from the working classes. The forms vary–appropriate, unlivable environment in the working people’s habitats, slash public healthcare system and fatten private healthcare industrial complex, increase funds for scientific research for military purpose while neglect medical research for public health. It has enslaved science, medical science, natural science with the task of super-accumulation of capital. Habitats of the working people are inhuman pits of sufferings. This has not basically changed since Engels penned the scene in his famous work on the condition of the working class in England. How do you find today’s reality the working people are facing in countries due to this pandemic?

The reality today in the U.S. is as you describe it. So many things are striking. Capital has since the 1970s more and more infiltrated all aspects of our lives and all parts of the world. There has been little effective movement to stop this, as even the social democratic governments of Europe have succumbed to the neoliberal program of continuous austerity and become ever more craven to the needs of capital. In the UK, for example, there was once a very fine national healthcare system. But decades of government cutbacks have eroded its effectiveness and scope. Today, the National Health Service has about 100,000 unfilled vacancies. In the US, the system is much worse. Working people typically have no or completely inadequate health insurance, and therefore millions suffer health problems that could and should have been corrected. Not many workers belong to unions anymore, so union-negotiated healthcare is not available to them. The very poor are in dire health. Hospitals are run as businesses with a focus on cost-cutting. This includes university-run hospitals. Public hospitals are mostly reserved for the poor, so, while healthcare workers in them are caring and competent, these hospitals are sadly lacking in needed supplies. Private hospitals are run on a just-in-time basis, so that there is no inventory of extra beds, and other critical supplies. Hence, the lack of ventilators, beds, masks, etc. As for science, pharmaceutical companies don’t find it profitable to do research on drugs that would combat the new viruses. So they don’t do such research. There is little public alternative as the government has been pretty much captured by capital, which wants no competition from the government. Scientists are often, though not always, just corporate workers willing to do capital’s bidding. We know of a Nobel Prize winner in medicine, who did excellent research on the heart, who has spent his years after winning the prize accumulating enormous wealth and engaging in the promotion of dubious products. Now, we see businesses and their scientists fighting to make money from the virus. Remember that the two scientists who developed the polio vaccine, Salk and Sabin refused to seek patents for the vaccine, believing that it belonged to the people. Sounds almost unbelievable today.

Factories in countries are shuttering down in the face of the pandemic ravaging countries. This is one sort of demobilization of the working people. Unions are facing unexampled situation. How to face this unprecedented situation arising out of the pandemic while capital is putting the burden on labor–deaths silencing societies, squeezed down bargaining space, indefinite choice between disease, death and hunger?

This is indeed a daunting task. One thing people like myself can do is disseminate as much information as possible, in an accessible way understandable by working people. Point out the lies of the ruling class. Importantly, show people counter examples to what is going on here. Make people aware, for example, of the remarkable biomedical advances made in Cuba. Ask why the drugs developed there are not available here. Point out the valiant acts of solidarity shown by Cuban doctors and medical workers around the globe. Encourage collective measure by workers aimed at caring for their own communities. Encourage mass strikes to improve matters, especially basic needs like health.

I hope that the experience of working-class people during this pandemic will serve as a giant wake-up call, shining a light on the irrational, body and soul-destroying elements of life as we have known it. For example, if governments say there can be no home evictions, that workers have a right to some money to stave off starvation, if people cannot be charged for virus tests and treatment, and this sort of thing, then maybe they will begin to think that rents, slaving away at meaningless jobs, that lack of healthcare, are really stupid. And that why should these things ever be tolerated? Believe me, the ruling class will be a harsh master when this is over. It will be up to us to fight against and overcome whatever they do.

World humanity has never faced such a situation. What’s the way-out by the working people, through their unions and political organizations?

The answer to the previous question addresses this in part. I will add here that in the end, capitalism is at the root of this pandemic. The spread of global agribusiness, the tremendous destruction of forests for such agriculture (and mining plus other capitalist ventures), the development of complex global supply chains that link the nations of the Global South and Global North have set the stage for this pandemic and others, perhaps worse, to come. Nature with its complexity and breadth once stopped these pandemics or limited them to small areas. What this means is that what has been done by capital must come to an end, sooner rather than later. Nothing less will bring us health and better lives overall. Only democratic socialism has any chance at all to stop the multiple plagues now assaulting us. If we don’t embark upon a radically new path, we are doomed. Covid-19 is but a sign of our fate if we do not take radical action.

Thank you for discussing the devastating situation working people are encountering today, and the steps that are now required.

Farooque Chowdhury is a freelance writer based in Dhaka. His books in English include Micro Credit, Myth Manufactured (ed.), The Age of Crisis, and The Great Financial Crisis, What Next?: Interviews with John Bellamy Foster (ed.), Dhakha: Books (2012), 190 pp.
View all posts by Farooque Chowdhury →

They murdered him, and gave us Obama & Biden
The Federal Reserve’s Coronavirus crisis actions, explained (Part 5)