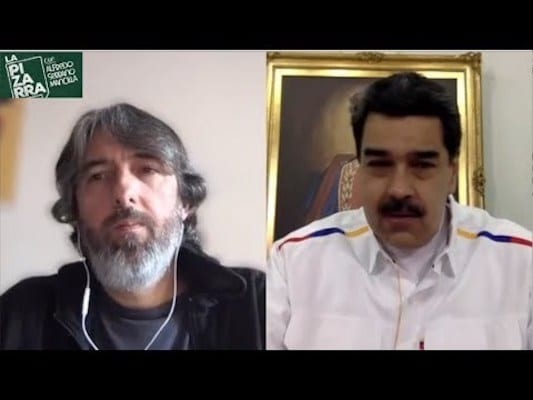 President Maduro: Venezuela Faces the Covid-19 With Voluntary Quarantine Without Curfew or State of Exception (Interviewed by Alfredo Serrano)

“Without a doubt, the first measure to contain the transmission chains of Covid-19 is quarantine, and we took it in advance on March 16,” Nicolás Maduro Moros, the president of the Bolivarian Republic of Venezuela, told in the Argentinian multimedia show La Pizarra, led by Alfredo Serrano Mancilla.

The Venezuelan president stressed that unlike other countries, the people of Bolívar abide by this courageous measure without the need to be forced in a repressive manner, and without a military curfew or supression of constitutional rights, as was done in the history of the nation in other circumstances.

“We call it a social, collective, conscious and voluntary quarantine, there has been no curfew or suspension of guaranteed [rights]. NO!. We have appealed to the conscience of Venezuelan families throughout the country and their compliance is 85%, on average, with this quarantine that we have been in for more than a month,” he explained during the exclusive interview with the Argentine multimedia platform this Saturday.

Asked about his health and schedule at this stage of the pandemic, the head of state admitted that he is quarantined like all Venezuelans, although, obviously working on a thousand things, sleeping 4 or 5 hours, exercising, walking, taking advantage of every moment.

And luckily in good health and in the battle as always.

The interviewer stated that he was amazed by the admirable situation in Venezuela, being the country with the lowest number of deaths in Latin America with the rate of 0.03% per 100,000 inhabitants. “What is the formula?”

President Maduro’s response was categorical. “I think something important was that we took bold and timely action. We do not enter into philosophical and useless discussions, that ‘if the quarantine this or that’”.

In addition, he explained that four determining and crucial principles of action were implemented:

The Patria System, whose technological platform allowed sending and receiving electronically, digitally and in real time, the results of a survey prepared jointly with the WHO, so that 19 million voluntarily enrolled to reveal their health status and other epidemiological data, was particularly relevant.

Through this voluntary system (Patria), the Bolivarian government protects the people with financial subsidies, bonds, education and benefits from socialist programs.

We located a little more than 150,000 suspected cases and immediately, with the Barrio Adentro health system, with more than 25 thousand family doctors, house to house, they have visited more than 140,000 of those cases and performed screening tests on time for all. Many were normal viral cases, but we did extended screening anyway. It is a big data formula combined with the Patria System, applying diagnosis and tests with great results.

The Venezuelan president considered that this is the formula that Venezuela has been building.

Based on the experience of China and South Korea. In Latin America, we are navigating this sea infected with the pandemic and no one can feel safe yet.