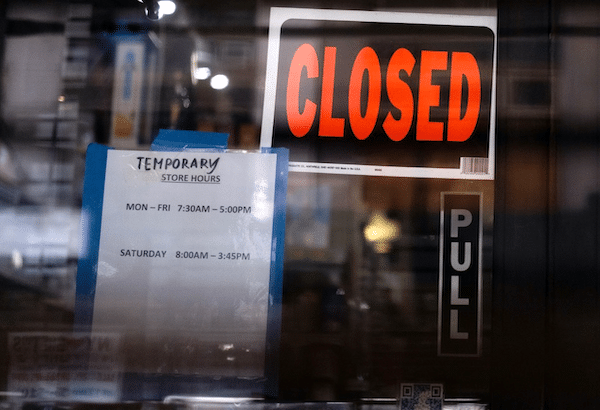 The same proposals that were demonized yesterday as radical socialism are embraced today to save the society from collapse.

The global COVID-19/coronavirus pandemic is compelling the U.S. government to do what protests, law suits, policy position papers and appeals to human decency could not: treat people as if they were valued members of the human family.

Government agencies that have consistently demonstrated a wanton disregard for the well-being of poor Black people have taken a series of radical actions that, prior to the pandemic, seemed impossible to achieve. While many laude these developments, it is important to examine them with clear political analysis for their impact on working class Black communities, particularly for the women and LGBTQ folks therein.

This is not for us, it is for them

On February 1, 1960, four Black students from North Carolina A&T sat at the FW Woolworth lunch counter in downtown Greensboro, in clear violation of segregation laws. The store manager refused to serve the protesters, but instead of giving up, they returned with more protesters. As the stalemate dragged on, the businesses continued to pay for rent, electricity, payroll and food, but were losing money because they could not make any sales to the Black customers. Consequently, by the end of July, after losing over $200,000 of business–approximately $1.7 million in 2020 dollars–Woolworths started serving Black customers at the store’s lunch counter.

Even though the store met protest demands, no astute political thinker concluded that the corporation somehow changed their ideology towards Black people. Woolworths changed their behavior for only one reason: the failure to drastically change in response to the crisis–in this instance, the protests–would have ‘killed’ the corporation by forcing it into bankruptcy.

Without minimizing the tremendous impact the end of Jim Crow segregation had on the daily lives of Black people, the fundamental lesson of the time must be brought into focus: Jim Crow laws were not ended to benefit the poor Black masses, they were ended to save wealthy white owned businesses.

In the same way, when corporations agree to increase wages following a labor strike, the company is not discovering some newfound respect for the value of labor, it is merely making a financial calculation in regards to its own survival: either decrease profits by paying workers more or lose all profits by going out of business. The companies are not doing workers a favor, they are giving up the spoils of a battle lost to organized labor.

As the crisis caused by the coronavirus/COVID-19 global pandemic accelerates, the response of governments to mitigate the spread and the social/economic impact of the virus has become increasingly drastic. However, because the drastic measures, which in another context might be called steps towards socialism, are only in response to a pandemic, they are only superficial changes in appearance, not fundamental shifts in ideology, motivation or structure of the economy.

This dynamic–actions that resemble radical socialist policies combined with motivations that remain capitalist, white supremacist and patriarchal–will cause great political confusion that can only be clarified with solid ideological grounding and clear political analysis.

To be clear, many of the drastic measures proposed in response to the pandemic, such as a moratorium on rent and mortgages, ending utility shut-offs, housing for the homeless and a direct check from the government, will have a tremendous impact on the daily lives of working class Blacks, particularly women and queer folk. To be equally as clear, just because an act has a positive impact on us, does not mean the act was intended for our benefit.

In the early stages of the crisis, California and its municipalities, secured thousands of hotel rooms–8,500 in the Bay Area alone–to house the homeless. These extraordinary measures were taken without protests or years of study from a blue ribbon task force. Given its long history on the subject, no astute political thinker can conclude that California suddenly cares about the homeless, either in housing or in health.

Due to its highly contagious nature, an infected person touching the gold-plated door handles of an office building while seeking shelter in the middle of the night can potentially transmit the coronavirus to the businessperson entering the building in the morning.

The core intent of this radical socialist leaning measure is to protect wealthier whiter people from social groups whose vulnerability put them at greater risk of carrying the virus.

Properly understanding this distinction will inoculate us from the avalanche of propaganda sure to come about how much the U.S. cares for its poor and how hard the Democratic party fought for measures to benefit our communities. This is no defense of the Republican Party; however, the Democratic party will attempt to take credit for things they did in agreement with Republicans, but never pursued when in power themselves.

What those in power do–not what they say, but what they do–during a time of crisis, particularly when that crisis has potentially fatal implications for them, speaks volumes about what they actually think, as distinguished from what they say they are thinking.

The lack of a functioning federal government has forced states to take initiative, including California’s effort to house the homeless. To summarize, state and local municipalities have either implemented or are seriously considering lite-versions of universal housing, full access to utilities regardless of ability to pay, decarceration and a radical rollback of police contacts with the public, including those accused of breaking the law. On the federal side, with a right-wing fascist and thoroughly incompetent executive branch and a deeply divided and highly partisan legislative branch, in which the two chambers are controlled by opposing parties, has launched a lite-version of universal income, a lite and limited version of universal healthcare and debt cancellation. All at break-neck speed.

All of the human-made elements that make this global pandemic so dangerous–lack of access to healthcare, housing and income–are all functions of capitalism. Conversely, all of the solutions to this devastating crisis are functions of socialist policies, even if not socialism itself.

Shifting from a capitalist economy to a socialist-leaning one, while in the midst of a pandemic, is an inefficient use of time and energy. But the fact that a society that prides itself on its efficiencies is jumping head first into such an inefficient use of resources speaks volumes about the way its leaders really feel about socialist policies.

While the notion that centering the lives of human beings, instead of the production of wealth, makes for a better society is no major revelation for anyone vested in the concept of people power and social justice, the biggest revelation of this moment, as it relates to capitalist versus socialist policies, is a bit more nuanced, but no less dramatic.

Even with a blundering and incompetent executive branch and a bitterly divided legislative branch, the policies intended to address the coronavirus have been drawn up, passed and implemented with remarkable speed. This rapid response occurred without a call for public input or in response to mass mobilizations or following a precipitous turn in public opinion.

So, how were the slow moving and deliberate governmental bodies that must always consult the needs of big business, whims of campaign contributors and winds of public opinion polling able to advance such a radical agenda–one that had no chance of passing at any point in 2019–so quickly?

Because even officials of a capitalist government know that socialist policies are the only ones that can address this crisis.

As it turns out, they have always known how to end homelessness and the importance of access to potable water. And when certain supplies are critical to the survival of the population–whether that is masks and ventilators or water and housing–both bitterly partisan parties agree that critical industries must be nationalized in order to protect the public from the free market forces of capitalism.

There is a saying that you don’t know who your friends are until you hit hard times. Well, hard times are here and all of the government officials are at socialism’s door.

When those hard times hit, they did not have to search, study or impanel a blue ribbon commission in order to discover the most effective measures to save their society from collapse. They already knew what to do.

What are now called “drastic measures” in response to a global pandemic were previously called ‘our list of demands.’ The very same proposals that were demonized yesterday as radical socialism are enthusiastically embraced today as a means of saving this society from collapse, with little outcry from either major political party or mainstream media outlet.

To be clear, these drastic measures are not proper socialism, as they do not permanently wrest control of the essential means of production from the hands of the capitalists and into the collective control of the working class. But make no mistake, universal healthcare, universal housing, guaranteed income, government provided personal protective equipment and the nationalization of core industries are all hallmarks of socialist societies.

Instead, those in power want to implement stop-gap socialist-like measures to confront the crisis in the short term while maintaining access to obscene profits–at the expense of humans and the planet–in the long term.

For anyone who is still wrestling in good faith with questions regarding the viability of socialism, understand this: it is not just the street corner radical who believes socialism will solve your problems. Conservative and liberal capitalists are banking on socialist policies to save every sector of the society they have built.

Those in power are fully aware that socialist policies will save lives and, indeed, the planet. We know they know, not because of what they say, but because of how they behave when hard times hit and they are faced with an existential crisis that threatens their very existence.

Unlike the crisis caused by social movements in the 1950s and 60s, no movements have (yet) mobilized to demand the government provide socialist solutions to the coronavirus crisis. The captains of capitalism are running towards socialism all on their own, because they know that socialist policies represent their best chance of survival.

Sometimes it takes a crisis to see clearly, but universal healthcare, housing, food, utilities, education and a clean and livable planet are all human rights and absolute necessities, even absent a global pandemic. We must fight for a system that will provide those human rights to us all.

A longer version of this article is available at Pan-African Community Action (PACAPower.org).