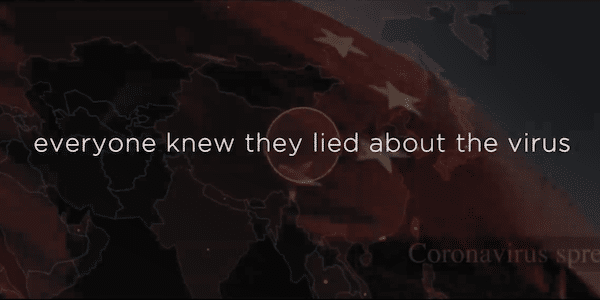 Pro-Biden super PAC American Bridge presents China lying about the coronavirus as something that “everyone knows.”

As COVID-19 and its economic effects clearly dominate all else politically, ads for the Trump campaign are ramping up the anti-China rhetoric in an effort to deflect blame. The first attack ad Donald Trump launched since Joe Biden became the presumptive Democratic nominee was titled “Biden Stands Up for China” (4/9/20), while a pro-Trump super PAC is airing multiple ads (4/16/20, 4/16/20) painting Biden as cozy with China. One ad warned China is “killing our jobs, stealing technology and putting us in danger with COVID-19”; the other concluded,

Now more than ever, America must stop China. And to stop China, you have to stop Joe Biden. 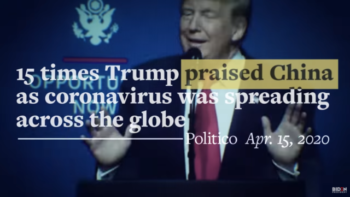 Rather than respond by focusing blame for the crisis squarely where it belongs—on Trump’s incompetent, reckless and self-centered management—and working to beat back the dangerously rising anti-Asian sentiment in this country, Biden and some of his supporting super PACs are choosing to adopt rather than challenge the anti-China premise of the attacks.

The pro-Biden super PAC American Bridge released an ad (4/17/20) that announced in a menacing voiceover:

The Biden campaign put out its own ad (4/18/20) accusing Trump of being the one who’s too cozy with China, saying he “rolled over for the Chinese” and “didn’t hold China accountable” for its own management of the pandemic.

As the Nation‘s Jeet Heer (4/20/20) pointed out, using the phrase “the Chinese” here is particularly problematic, as it conflates China’s government with Chinese people—many of whom live in the United States. And the obsession (shared by much of the media) with “holding China accountable”—i.e., making China a scapegoat—continues to prioritize aggressive us-vs.-them international posturing over international cooperation and looking for lessons from China’s ultimately successful drive to control the virus’s spread inside its country (FAIR.org, 3/24/20). 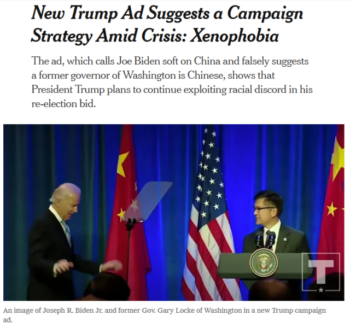 The New York Times (4/10/20) is able to identify Trump’s attempt to tie Biden to anti-Chinese messages for what it is—but not so much when the attacks go in the other direction.

The responsible way for media to cover this campaign battle would be to call out these xenophobic Yellow Peril ads for what they are. But while some journalists are able to do so for the pro-Trump ads, far fewer are questioning the pro-Biden ads. After Trump’s April 9 ad, a team of New York Times reporters (4/10/20) managed to call the ad “xenophobic”—though its decision to characterize his rhetoric as merely “exploit[ing] racial discord” rather than fomenting it reveals the paper’s continued adherence to its executive editor’s insistence that it must not directly call Trump racist (FAIR.org, 11/22/19). The Washington Post‘s John Wagner (4/10/20), noting that the ad included an image of former Washington State Gov. Gary Locke, said it,

appeared to be suggesting that Locke is a Chinese official at a time when Asian Americans face rising bigotry and blame for the coronavirus outbreak.

But when media later included the pro-Biden response ads, criticism was in short supply. While Trump’s xenophobia and racism are unparalleled in contemporary mainstream U.S. politics, and therefore easy to identify, it’s certainly possible—and urgent—to point out xenophobia and racism from both major parties, without at the same time falling into the common media fallacy of creating a false equivalence between them.

Reporting a week later on both sides’ ads and rhetoric on China, a separate New York Times team (4/18/20) labeled the GOP strategy an attempt “to divert attention from the administration’s heavily criticized response to the coronavirus by pinning the blame on China.” But the reporters merely found it “striking” to see both Biden and Trump “attempt to portray each other as captive to Beijing.” The piece also described, without commentary, the American Bridge ad.

Meanwhile, in a Post followup (4/18/20) about Trump’s efforts to link Biden to China, the team of reporters let the rival super PACs offer the only commentary on their ads. And a piece by the Post‘s Michelle Ye Hee Lee (4/19/20) on the American Bridge ad couldn’t get past bland press release-style descriptions in its more than 500 words: “Trump and his allies increasingly are seizing on China’s role in the spread of the novel coronavirus to attack Biden,” while the ad “aims to counter the Trump operation’s narrative.” 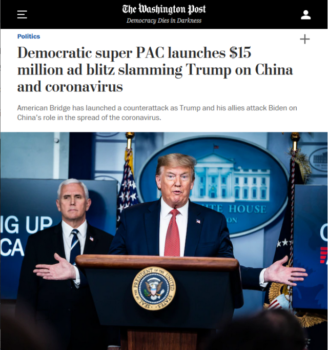 The Washington Post (4/19/20) features rival political operatives arguing about which candidate “bent the knee to China.”

Like the New York Times, the LA Times (4/17/20) called Trump’s strategy “xenophobic,” but offered no similar analysis of the pro-Biden messaging.

ABC‘s The Note (4/20/20) appeared to buy in to the ads’ political messaging, arguing that

pinning blame on China could draw bipartisan agreement—particularly as more evidence emerges that the Chinese government knew more than it was letting on months ago.

(It’s worth reiterating that China alerted the World Health Organization about a peculiar form of pneumonia on December 31, 2019, when just 27 cases had been recognized, none of which had yet turned fatal; it was not until a week later that Chinese scientists identified the novel coronavirus as the culprit. China declared a lockdown in Hubei Province on January 23, after 18 deaths had been counted nationwide; by comparison, the first statewide stay-at-home order in the U.S. was issued on March 19, by California, after 200 national deaths.)

On CNN (4/19/20), host Don Lemon aired a clip from Biden’s ad and commented, “The Biden campaign turning the tables on the president there, because Trump has been trying to say that Biden is the one who is too cozy with China.” Contributor Garrett Graff likewise had no critique of Biden’s ad:

Yes, and it’s hard to believe that this administration could get away with saying Joe Biden is soft on China, given the extent to which President Trump is on record praising China over the course of this entire presidency, let alone just in the last couple months during the pandemic.

This is the most devastating political ad I’ve seen in years. It reveals the truth about Trump and China, and that truth is ugly.

The back-and-forth shows the extent to which the deadly virus, which experts say originated in the city of Wuhan, has turned China into a powerful election-year issue, with both major party candidates scrambling to get on the right side.

It’s a classic media formulation, but of course it’s not the virus that turned China into a powerful issue—it’s political leaders, aided and abetted by their media accomplices. And unfortunately, the “right side”—the one that seeks to end both the pandemic and xenophobia—is largely missing from the media at the moment.