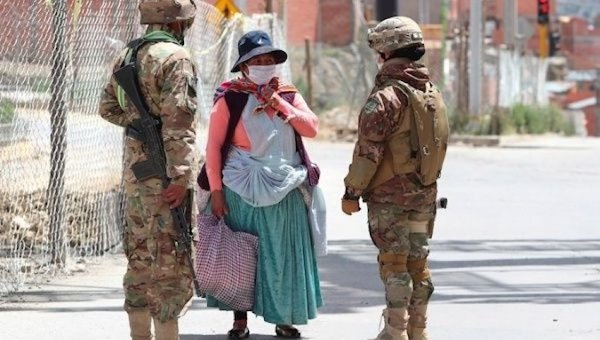 Soldiers question an indigenous woman on the way to buy food. Photo: TeleSUR

Given the exponentially rising death toll from COVID-19 and the devastating social and economic effects of brutal lockdowns, what could a humane and progressive response to the global pandemic look like?

This is what Bolivia’s Movement Towards Socialism (MAS) has sought to outline in #PutLivesFirst, its detailed and comprehensive plan for tackling COVID-19 and its social and economic impacts.

The plan was released on April 15 by MAS presidential candidate Luis Arce, a former minister of economy under President Evo Morales, who was overthrown in a coup last November. Since then, the country has been ruled by an unconstitutional “interim” government headed by right-wing coup president Jeanine Anez.

With Morales forced into exile and barred from running, Arce was selected to run as the MAS candidate for the May 3 general elections, which have now been postponed due to the pandemic. The postponement is just one of a range of repressive measures that have accompanied the Anez government’s nationwide lockdown that began on March 22.

#PutLivesFirst notes that COVID-19 “has put at risk not only the health and lives of millions of people around the world, but also the economy and social coexistence”. It warns that “the world today is experiencing an intensification of the multiple crises of capitalism, which could unleash an unprecedented humanitarian catastrophe”.

Acknowledging that no country was fully prepared to confront the pandemic, it says the huge deficiencies in the Anez government’s plans for the preparatory and containment phases of the pandemic “have greatly complicated the management of the phase we are in today, meaning the projections for cases and deaths are frightening.

“Unfortunately, the actions announced to date are clearly not part of any integral plan, and continue to be late, inefficient, discriminatory, improvised and very weak.

“In declaring a nationwide lockdown, it was necessary to come up with and present a package of measures to alleviate the economic and social effects it would have on all sectors, especially the most vulnerable.

“It is inconceivable, even inhuman, that after more than 20 days of lockdown, economic support for the people who need it most had not been announced… and [the recently announced support measures] will only begin to reach people on April 30.

How are those Bolivians who find themselves among the hardest hit by the crisis meant to survive, without income or food for more than a month?

In the area of health, the MAS proposes incorporating the private healthcare sector into any national plan to combat COVID-19. This would extend to private laboratories, which are to be brought under state control to provide their services free of charge.

The plan calls for the creation of medical brigades composed of available medical personnel and students, equipped with the necessary biosecurity protection, to go into communities and detect and diagnose possible cases.

These brigades would also play a role in implementing a strict regime of tracing any chain of transmission to help identify possible cases, as well as actively searching and testing for cases in areas or neighbourhoods where clusters have been detected.

Among other healthcare measures, it calls for the immediate, mass importation of medical equipment and supplies, and the designation or construction of infrastructure in each municipality to be used to adequately house and treat patients that need to be isolated.

When it comes to guaranteeing supply chains, the plan says all workers involved in ensuring access to basic goods must be provided with appropriate protective equipment.

Critically, it calls for conditions to be established to allow the farming cycle to continue “and guarantee supply chains for agricultural production” during the period of lockdown, so as to avoid having to import and “put at risk the food security of the Bolivian population”.

When it comes to the supply of essential medical and hygiene supplies, the state must support small and medium-sized companies in endeavours to meet the country’s needs. The plan adds that, given the drop in demand, the state hydrocarbon company YPFB should distribute any alcohol it would normally use in the production of petrol for use as disinfectant in hospitals and homes.

The plan also outlines a series of wealth redistribution measures to tackle any rise in poverty.

These include dramatically raising the level of the various social security payments the government has announced, along with ensuring the free provision of basic services, such as water, electricity, gas and telecommunications to low-income families. All students must also have access to free internet, to ensure they can continue to study.

The state must also prohibit evictions, the plan says, and cover the cost of rent for low-income families “so that families that live off the income generated by this rent are not negatively affected”.

The plan calls for a ban on all sackings and for policies to be put in place to preserve jobs and compensate the self-employed.

When it comes to the economy, the plan calls for a rejection of the neoliberal model and a return to the “social communitarian productive economic model” implemented under the MAS government, and premised on “economic growth with income redistribution”. Central to this model is public investment and stimulating the domestic market as ways to guarantee sustained growth.

To help with this, the plan calls on the Central Bank of Bolivia to guarantee the necessary liquidity in the economy, especially in the financial system. To aid public investment, the plan calls for the non-payment of public external debt throughout 2020–21 and any internal debt owed by public companies.

A key area for public investment, notes the plan, is the healthcare system. To help finance a medium and long-term plan of investments, the plan proposes the creation of a Healthcare Solidarity Fund, with initial funds to come from the application of a tax on large fortunes.

The plan also suggests imposing a maximum wage limit in the public sector for the duration of the crisis, with the money saved being redirected to the fund.

For the private sector, zero-interest loans must be made available for all companies to help cover wages and investments. The plan adds that special policies will be required to reactivate those sectors hit hardest by the crisis: tourism, hotels, hospitality, services and construction, among others.

The plan proposes to build upon important community initiatives that have emerged during the crisis, such as the establishment of community food halls, by working with social organisations to expand these across the country in a safe manner.

To facilitate this, it proposes coordinating with “local councils, social organisations and citizens in general” to ensure food that is donated by rural producers for community food halls can be safely transported and distributed in urban areas.

Other communitarian initiatives, including solidarity-based trade initiatives (such as bartering of products between rural and urban communities) and community or family food gardens, should also receive state support.

It states: “During the pandemic, the adoption of containment measures, such as the lockdown, have had a very negative impact at the social and economic level; but they have had a positive impact in terms of the environment, given we have seen a decrease in various indicators of pollution.

“However, this environmental impact will only be temporary because, once the lockdown is lifted, we urgently need to reactivate the economy to avoid a humanitarian crisis.

“From this emerges one of our biggest challenges: developing economic policies during the pandemic that incorporate criteria to look after Mother Earth.”

#PutLivesFirst is clear in stating that “the fight against the pandemic does not include proscribing human, political, economic or social rights”.

It calls for an end to the political persecution unleashed since the coup — against the MAS and social leaders — and an end to the excessive use of force against poorer communities in implementing the lockdown.

The plan notes the need to provide up-to-date and trustworthy information to the media for dissemination in Spanish and indigenous languages, to ensure that everyone is informed.

The plan also outlines special policies to help: children at risk; women living in situations of domestic violence; the elderly, those with chronic illnesses and disabled people who need to avoid places of contagion, such as shops or banks; homeless people; those that suffer discrimination, such as the LGBTI community; and prisoners.

In terms of international policy, the plan says cooperation must be premised on the need to protect sovereignty and lives, not ideology, and calls for the return of the Cuban doctors expelled by the Anez government after the coup.

It also states Bolivia should take up a leading regional role in reactivating mechanisms of integration that were “built on the basis of fraternity, solidarity and reciprocity, to jointly wage the fight against the coronavirus”, and, internationally, in the campaign to cancel Third World debt.

[Download the #PutLivesFirst plan (in Spanish) here.]
Monthly Review does not necessarily adhere to all of the views conveyed in articles republished at MR Online. Our goal is to share a variety of left perspectives that we think our readers will find interesting or useful. —Eds.