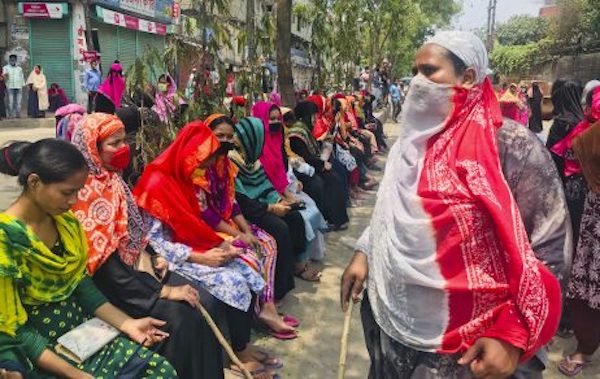 On April 18, amid a nation-wide lockdown to contain the spread of COVID-19, around 100,000 people gathered at the Rahmania Madrassa in Bertola village in Bangladesh to participate in the funeral of Maulana Jubayer Ahmed Ansari, a popular Islamic teacher. Only a month earlier, some 25,000 people congregated at Raipur in Lakshmipur district for a mass prayer, which they believed would protect them from being infected by the coronavirus.

Religious gatherings have been an important vector in spreading the new coronavirus in several countries in Asia. Since religious beliefs are strong among a significant section in Bangladesh and clerics wield more influence than the government over the thinking and actions of these people, the government has been apprehensive that such gatherings will dramatically increase the already rising number of coronavirus infections in the country.

Consequently, since early March, the government has been cautioning the public against gathering in large numbers, advising people to remain indoors. On March 26, it imposed a nationwide lockdown that has been extended until May 5. Schools, colleges, and factories have been shut down as have transport facilities and industrial and agricultural activity.

With millions of people expected to flock to mosques and markets during Ramzan (Ramadan), Islam’s holy month, additional rules have been put in place. These disallow the presence of more than 12 people, including clerics and mosque officials, in places of worship during Ramzan prayers. The government has also banned iftar (evening meals that mark the breaking of the fast) gatherings. The question is whether authorities will be able to enforce lockdown rules during a period of heightened religious piety.

None of these measures would have been easy for the government to take, given how sensitive religious issues are in Bangladesh and the fact that the ruling Awami League, a secular party, often comes under pressure from religious fundamentalists. Still it was forced to take decisive steps, given the growing severity of the COVID-19 outbreak in the country and the need to enforce social distancing.

Since March 7, when Bangladesh announced its first confirmed cases of COVID-19, the number of infections in the country has grown significantly. As of April 29, 7,103 Bangladeshis have tested positive for COVID-19 and 163 of them have died of the disease. Coronavirus infections remained low throughout March and it was only in April that the numbers began to surge. Cases per day touched a high on April 28 when 549 new infections were reported in 24 hours; a new record was set the very next day, with 641 new cases. Although the global trend points to a higher incidence of COVID-19 infections and related fatalities among those above the age of 60 years, in Bangladesh, this age group accounts for just 10 percent of all confirmed cases. Bangladesh is also the only country in the world where coronavirus-related fatalities outstrip recoveries.

Going by statistics relating to the number of infections, Bangladesh’s COVID-19 problem seems less serious, especially when one considers the size of its population (163 million) and the larger number of cases that other countries are grappling with.

But public health professionals say that the figures do not capture the reality on the ground as testing rates have been very low in Bangladesh. Indeed, as of April 18, Bangladesh was carrying out only 124 tests per million of its population, according to the Dhaka-based Institute of Epidemiology, Disease Control, and Research. While this was increased to 240 tests per million on April 25, testing is still inadequate. Noted Bangladeshi virologist Nazrul Islam has said that 10,000 people would need to be tested daily to get a more accurate picture of the prevalence of COVID-19 in the country.

Bangladesh’s capacity to test for coronavirus infection and to isolate and treat patients confirmed to have COVID-19 is restricted by its fragile public health infrastructure. The country has just 127,000 hospital beds, 91,000 of them in government-run hospitals. Besides, it has only 737 beds in intensive care units, with just 432 of these in the public health system. Most of the intensive care facilities are concentrated in Dhaka. “Overburdened” at the best of times, this infrastructure is in no position to meet the challenges posed by COVID-19.

Like its counterparts in other countries, the Bangladesh government was slow to respond to the pandemic in the initial stages. It has since set up more testing facilities and quarantine centers and is procuring testing kits and medical equipment from abroad. The government has sought to enforce social distancing through the lockdown but has not been too successful in this regard so far. Several factors make this a near-impossible task in Bangladesh.

For one, social distancing is anathema to Bangladeshi society and culture.

Even if people want to follow the guidelines, as in other countries, social distancing is a privilege of the rich and middle class in Bangladesh. Most Bangladeshis live in close proximity to each other. Families are large and live in small and cramped tenements, with several families sharing a single tap and toilet. This is even more pronounced in the refugee camps in Chittagong, where around a million Rohingya refugees live in crowded and temporary shelters and access to health and other facilities facilities is even lower than in the rest of Bangladesh.

Importantly, many Bangladeshis, like rickshaw pullers, earn their living through jobs that require them to go out to work. For them, there is no work-from-home option. Consequently, convincing people to stay indoors or socially distance, even if it is to protect them from a deadly virus, is difficult.

The lockdown is likely to come under greater strain in the coming weeks not only on account of Ramzan but also because many are struggling to make ends meet. Also, garment factories have started production again, despite lockdown rules.

Since April 26, hundreds of garment factories in industrial belts in Gazipur and Ashulia in the suburbs of the capital, Dhaka, have begun functioning. Pressure to meet production deadlines from American and European garment brands and possible loss of business to competitors have prompted factory owners to reopen manufacturing units. Some 200,000 workers are likely to get back to work at garment factories in Ashulia soon. They will be joined by millions more as people rush to factories in Dhaka and other cities from their homes in villages on foot and in crowded vehicles to return to work. These crowds could emerge new vectors of the COVID-19 pandemic in Bangladesh.

The lockdowns prompted by the COVID-19 outbreak will weaken Bangladesh’s economic and political stability. Citing an Asian Development Bank analysis, Bangladesh’s Finance Minister AHM Mustafa Kamal announced in late March that the country would lose 1.1 percent of its GDP growth on account of the pandemic.

Bangladesh’s readymade garment (RMG) sector and remittances from Bangladeshi workers abroad are major pillars of the country’s economy. Manufacture and export of RMG accounts for 13 percent of its GDP and employs nearly 4 million people. The sector was already showing negative growth of 5.71 percent in the first half of the last fiscal year and now, with several companies in the United States, U.K., and Europe cancelling orders that were placed before the COVID-19 outbreak, its future isn’t looking good.

Importantly, Bangladesh’s foreign exchange earnings are poised to drop  Foreign remittances projected to fall by 22 percent, from $18.32 billion in 2019 to $14 billion in 2020.

Currently, Bangladesh falls in the least developed country (LDC) category. Over the past five years its economy has been witnessing a 7 percent rate of growth and this was expected to propel it into the category of a developing economy by 2021. The coronavirus will put Bangladesh’s aspirations in this regard on hold. Also in danger is the political stability Bangladesh has enjoyed in recent years. The good performance of the economy had strengthened public support for the Awami League government. This support could dwindle if the government is unable to revive livelihoods.

The impact of the COVID-19 pandemic will be felt not just on the national economy but on the household economy of millions of Bangladeshis. Its devastating impact is already unfolding in Bangladesh. Daily wage earners have been badly hit; many have nothing to live on now and are unable to buy food for their families. Hunger, malnutrition, and other problems that have always plagued Bangladesh are poised to intensify as a result of the lockdown.

Such problems will increase as Bangladeshi migrant workers return home. Already around half a million have returned on account of the COVID-19 outbreak. They will be joined by many millions more. Most Bangladeshi migrants work in West Asia, where economies have been hit by declining oil prices. Many will be forced out of their jobs and will have to return home to unemployment.

Unlike in several of its neighbors, in Bangladesh, most migrants are from poor rural families. Their remittances support entire families and have played a major role in poverty alleviation in Bangladesh. That is now in serious jeopardy.

The current crisis is being described as the COVID-19 crisis. But this doesn’t capture the full devastation that is being unleashed by the coronavirus. As Asif Saleh, executive director of BRAC, an international nongovernment organization headquartered in Bangladesh, observes, this is a “humanitarian crisis with a public health dimension.”