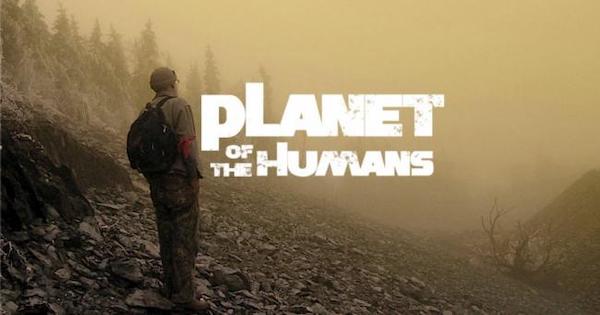 Planet of the Humans: a muddy cocktail of valid criticisms, disinformation and defeatism

Planet of the Humans
Directed by Jeff Gibbs

Planet of the Humans is a new documentary about climate and environment politics, directed and narrated by Jeff Gibbs, and produced by Gibbs and Ozzie Zehner (author of Green Illusions: the dirty secrets of clean energy and the future of environmentalism). Michael Moore is listed as executive producer and has actively promoted the film through his networks.

The film makes numerous good points, but fails as a whole because it spreads corrosive disinformation and mistruths about wind and solar. It also utterly fails to articulate a vision of what the alternative environment movement it claims to be a clarion call for would actually look like.

Much of the film is spent making points that are entirely agreeable. It analyses corporate funding of environmental Non-Governmental Organisations (NGOs) and notes the correlation between donors with certain interests, like logging and woodchip production, and NGO policy on biomass electricity plants. Here in Australia, these plants have been labelled ‘forest furnaces’ and have been fought vigorously.

The film does a good job at exposing these forest furnaces and the monoculture, fertiliser intensive plantation forests that feed them as a bad alternative to fossil fuels. It also looks at such plants being used as municipal waste incinerators. The film explores the negative ecological impacts of producing solar panels, wind turbines, electric cars and batteries.

It is critical of the idea that a renewable energy based ‘techno fix’ can allow a growth-based capitalism to continue indefinitely by simply substituting renewables for fossil fuels. It highlights various examples of corporate greenwashing. It pillories two music festivals, which claim to be running on solar power but need diesel or mains power backup. It explores the broader ecological crisis we are in, with oceans and forest habitat polluted and in collapse. It calls for the environment movement to be ‘taken back from the billionaires’.

Much of the source footage, and thus the arguments being made, are from a decade or more ago. This means that what would have been a fairly topical, if still problematic, film in about 2010 or 2012, has clearly aged. A lot.

Climate activist Bill McKibben from 350.org is depicted supporting a biomass plant at a university in 2009 and portrayed as a vocal biomass supporter. Yet since 2016, he has changed his position on biomass and now opposes it. The film looks at NGO support for gas as a ‘transition fuel’, ignoring the fact that most NGOs now have a clear policy in favour of 100% renewables.

But the big problem with this film is that it contends that wind and solar energy are basically a big scam; a fig leaf for the fossil fuel industry; and that climate campaigners should stop campaigning for them, period. It is an absurd and unacceptable line of argument.

It is one thing, and entirely valid; to point out that solar panels and wind turbines have an environmental footprint of their own. However Planet of the Humans, informed by the work of Ozzie Zehner in Green Illusions, goes further than this. It argues that solar panels consume more energy to manufacture than they produce–a blatant lie.

It looks at a solar installation in a park built way back in 2008 and notes the panels convert about 8% of the sun that hits them into electricity, but fails to mention that modern panels are far more efficient (15-22% efficiency). It infers that any grid connected solar PV array has lesser environmental credentials than a standalone system, as if panels being grid connected is ‘cheating’.

The film argues that wind and solar have never displaced a single coal fired power plant anywhere in the world (utter bollocks), and that every megawatt of wind and solar needs 24/7 fossil fuel backup due to their intermittency. This is untrue and also ignores the options for renewable storage like dispatchable solar thermal or pumped hydro.

Zehner tells viewers while looking at a solar thermal plant (without storage) with gas preheating at Ivanpah that it would be more efficient just to burn the gas in a conventional gas turbine, ignoring the fact there are other types of dispatchable solar thermal plant that don’t use gas. In another scene a solar thermal facility, SEGS, is portrayed as an abandoned ‘dead zone’ when in fact the components were being refurbished and the facility is still in operation. The film looks at the fairly small percentage of wind and solar globally and contends this shows wind and solar should be abandoned when in fact we need far more.

The film could have interviewed researchers at publicly funded renewable energy research agencies. It could have explored how public ownership of the energy sector could remove the profit motive from the equation and support moves toward cleaner types of wind, solar and battery technology, with more reusable components.

The film traces the origin of wind and solar technology to the oil shocks of the 1970s. It links their rise, (as well as their demise when the oil price came back down in the 1980s), exclusively to the fortunes of the oil industry, ignoring the powerful environment movement of the 1970s. Yet that movement was a substantial factor driving the emergence of these technologies.

The film could have talked about the limitations and problems of renewable energy and observed the fact they are not a silver bullet and that a system built on maximum profit must be dismantled as well. Instead the film seems to assume wind and solar are and always will be controlled by corporations; that their only purpose is greenwashing, and declares them to be the enemy; a distraction.

Having made a bunch of valid critiques of the role of NGOs in the movement and their connection to corporate interests and donors; having elucidated the problem with incinerating woodchips and garbage to make ‘renewable’ energy; and having dispensed a mixture of valid criticisms alongside rank disinformation and lies about wind and solar, the film then arrives at its alternative campaign beachhead.

As pointed out in other reviews of the film, an all-white panel of speakers wax lyrical about ‘the herd of elephants in the room’ — the urgent need to reduce the global population. As Green Left has consistently argued, population control — Malthusianism — is a non-solution to the climate crisis. It is a diversion from a class analysis of who control the means of pollution. Instead, it blames ‘humans’ in general for how a tiny minority of the population–the ruling class–have structured and keep in place a destructive global economy. With ease, Malthusianism gets channelled in a racist and eugenic direction targeting migrants and people in the global south.

To compound matters, Gibbs accuses climate activists of using a ‘religious’ obsession with renewables to avoid accepting that, in essence, the fight to stop runaway warming is lost and we are headed for a mass die off. There is nothing wrong with acknowledging that there is a good chance we may lose the historic fight to prevent hothouse Earth, and that losing the battle will involve human suffering on a horrific scale. Indeed this looming possibility is what motivates most climate activists.

However, pathologising a strategic focus on renewables as somehow indicating that climate activists are ‘in denial’ and must be burying their own fear of death, is an incredibly crass and insulting accusation to direct at those who Gibbs claims to be hoping to steer in a more healthy and productive direction as activists..

For a film that claims to be about breaking the environment/climate movement away from the tentacles of capitalist-funded NGOs anchored in the ideology of capitalist ‘green growth’ (an entirely agreeable goal), the film does a frankly atrocious job when it comes to interviewing anti-capitalist or non-NGO climate activists. It is no better at painting a vision of what an alternative, people powered climate movement could look like.

How could a film about climate and renewables campaigns released in 2020 somehow avoid hearing from intelligent, well informed high school activists who have just led the largest global wave of climate demonstrations in history? Aren’t massive grassroots demonstrations and strikes a crucial ingredient in building a movement that can break away from the various manifestations of corporate control and co-option? Why not interview Green New Deal proponents like congresswoman Ilhan Omar or her daughter, climate strike activist Isra Hirsi? What about author and climate activist Naomi Klein, or Marxist ecologist John Bellamy Foster?

If wind and solar are a huge scam, why not grill someone with a solid grounding in the subject matter who is independent of corporate interests. Examples include University of Delaware professor Cristina Archer, or Stanford university researcher Mark Z Jacobson, who was part of a team that released a report in 2017 showing how the planet could be repowered with 100% renewable energy (without using biomass or natural gas)? Is it the chance someone of Jacobson or Archer’s acumen might have embarrassed Ollie Zehner or Jeff Gibbs in a debate?

Planet of the Humans is a missed opportunity to make a comprehensive critique of corporate influence and co-option in the climate movement. It could have looked at false solutions like biomass ‘forest furnaces’, and then contrast these with the type of politics, economics and broader suite of practical measures required to truly tackle the climate and ecological crisis.

The film’s fatal flaw is that it accurately analyses much of what is wrong with todays environment movement, but proceeds to channel the perturbed viewer into a dead end. It offers no viable alternative to continued fossil fuel use.

‘Brightsiding’ the climate crisis and over-emphasising a message of hope built on renewables as a ‘techno fix’ may well be a problematic strategy (this is hardly a new observation). But crafting a documentary that demoralises and disempowers, and then seeks to channel the disheartened viewer into false solutions like Malthusianism, is unequivocally worse. This is a recipe for disengagement and resignation, not a renewed, more robust and radical movement. Worse still, critics of the film are conveniently painted as defending corporate co-option of the climate movement.

There are problems and limits with wind and solar. We need to find ever cleaner ways of manufacturing, deploying, and later decommissioning them and recycling and reusing the components. We need to abolish capitalism, reduce the pace of economic activity, and socialise the energy sector. Renewables are only one part of a broad suite of changes needed.

All of these qualifying factors aside, wind and solar are nonetheless crucial tools that must be appropriately deployed en masse. Replacing fossil fuels with these technologies — and quickly — necessarily remains at the centre of any viable strategy to tackle runaway warming. That isn’t a ‘productivist’ delusion or distraction, or a concession to green capitalists. It is just a cold hard fact. We need to stop burning coal and gas.

It is an indictment of Michael Moore that he has lent his good name and reputation to a documentary that so badly throws the baby out with the bathwater. It tells us that Moore has failed to do his homework on wind and solar before releasing such a flawed film, with disreputable fringe commentator Ollie Zehner as its ideological centre of gravity.

Moore needs to wash his hands of this train wreck immediately and start again. There is too much at stake to be releasing bad takes like this in 2020.