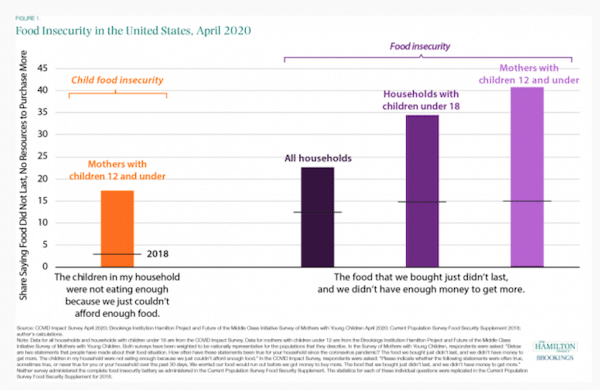 A new Brookings study, performed by Lauren Bauer based on a late April 2020 survey

Given the dramatic rise in unemployment, cuts in hours, and sharp decline in gig economy work, it isn’t surprising that hunger is becoming more common, particularly among families with children. Nearly half the U.S. couldn’t withstand a $400 emergency, and most households that have taken hits are seeing bigger income losses than that. Only 29% of the unemployed got insurance payments in March, and those set to get paper stimulus checks could get them as late as August.

A new Brookings study, performed by Lauren Bauer based on a late April 2020 survey, gives a stark picture: 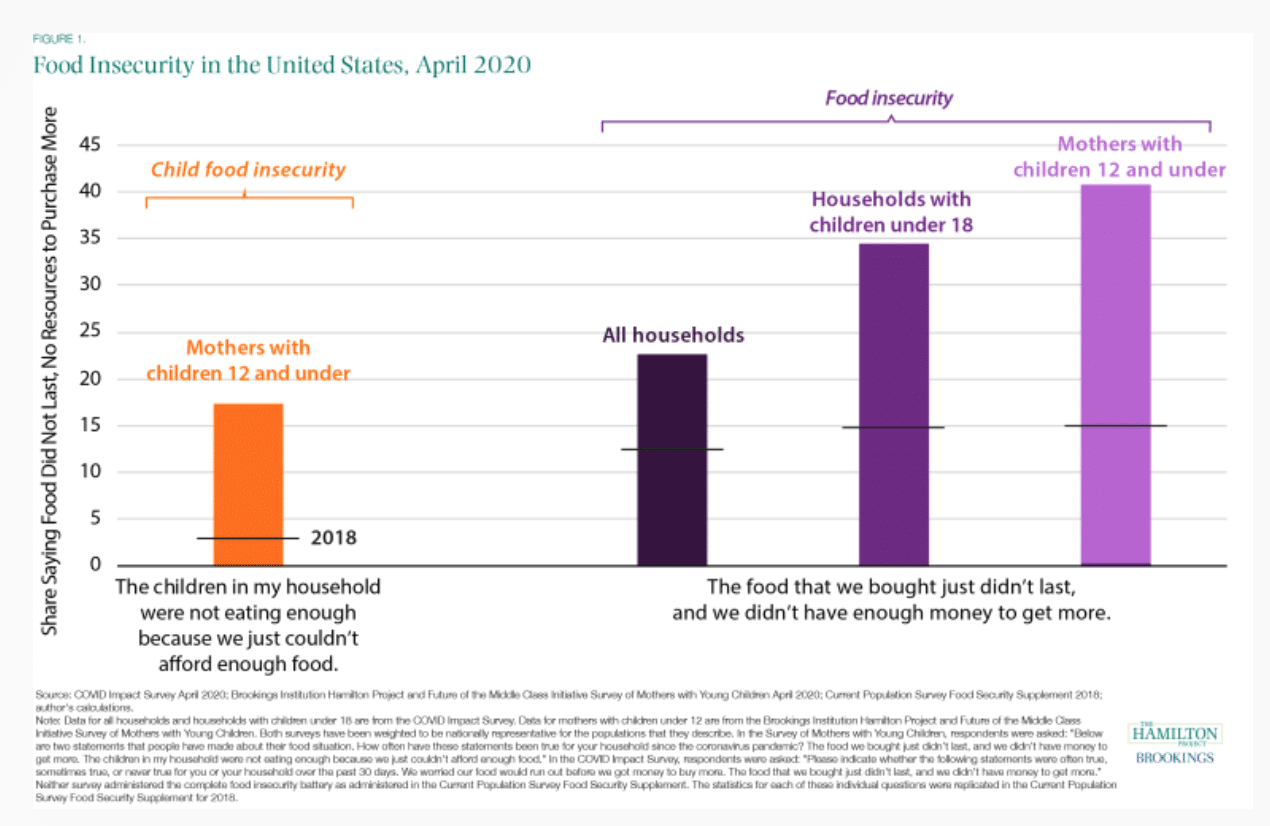 Look at the raw responses: 40% of the households with children don’t have enough food, and over 1/6 of the children under 12 aren’t being fed enough. Given the way the questions are phrased, children may be in even worse shape than these results suggest, since some respondents might not want to admit that their kids are going hungry; as we’ll see soon, Bauer sees this as the case when she compares these results to other survey data.

Compare the situation now to the minor blip during and shortly after the financial crisis: 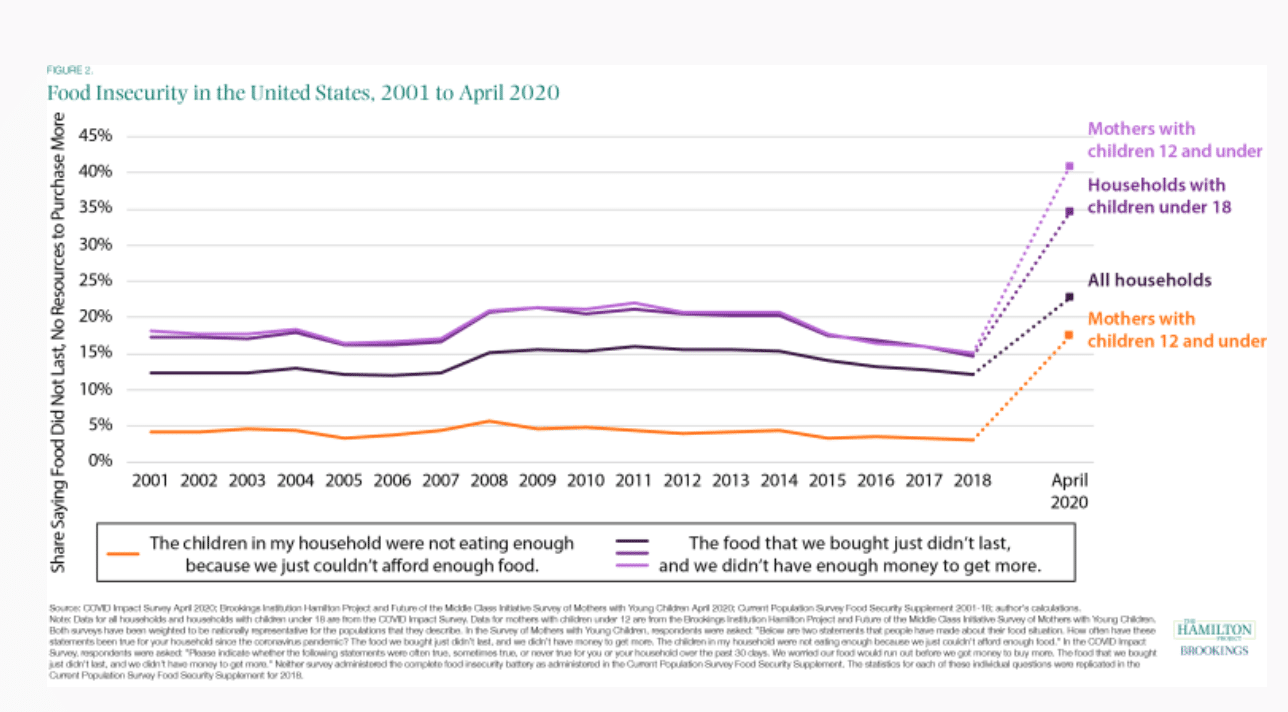 And some families are suffering severe hunger. Bauer pointed out that 3.4% of the mothers said their under 12 year old children were “often” not eating enough since the start of the coronavirus responses due to lack of resources.

The USDA uses a different metric, “food insecurity” and typically finds food insecurity to be twice as high as the levels found when asking if families don’t have enough to eat. Because Bauer is using two different surveys, some of the comparisons are labored, but you can get the drift of the gist:

Bauer recommends increasing the maximum SNAP benefits by at least 15% and the minimum by 50% as well as other measures like suspending work requirements for students and continuing the current work requirement suspension.

The New York Times is amplifying these findings and turning to the Congressional fight over whether to raise SNAP benefits. Note that the increase in benefits displayed in the chart below almost certainly explains why hunger didn’t rise meaningfully as a result of the financial crisis. And the fact that they’ve remained high confirms that this recovery wasn’t all it was cracked up to be: 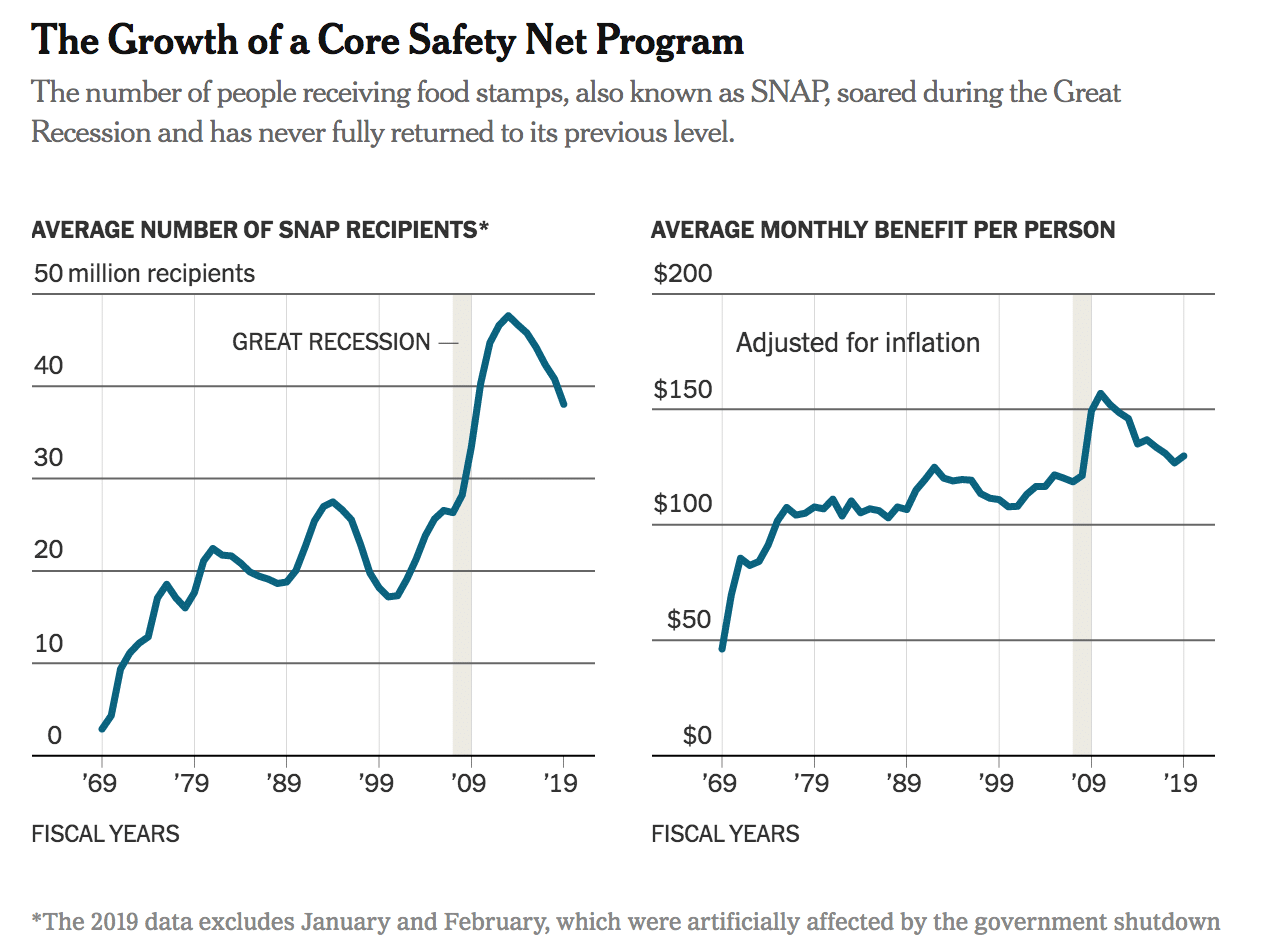 Of course, the Republicans are spinning the data the other way. They contend fact that the level of SNAP benefits remained high even after unemployment rates fell is proof that the program is a big handout and too many people are getting bennies who don’t need them. Someone needs to pound into their heads what a living wage means and that you can cut the cake any way you want to–higher wages or more generous safety nets–but people need to eat. Or maybe not.

One of the reasons for the Brooking report focus on child hunger is that the Administration has set out to axe many of them from the program:

Mr. Trump and his congressional allies have agreed to only a short-term increase in food stamp benefits that omits the poorest recipients, including five million children.

From the New York Times reminds readers that attacking food stamps has been a two party affair:

Its current form dates to a 1977 compromise between two Senate lions, the liberal George McGovern and the conservative Bob Dole. But almost simultaneously Ronald Reagan added to a stream of racialized attacks on the program, invoking the image of a “strapping young buck” who used food stamps to buy steaks. As president, Reagan went on to enact large cuts.

After President Bill Clinton pledged to “end welfare” in the 1990s by restricting cash aid, conservatives sought to include big cuts in food stamps, which he resisted. The law he signed subjected cash aid to time limits and work requirements but allowed similar constraints on just one group of food stamp recipients–adults without minor children, roughly 10 percent of the caseload. (Other provisions disqualified many immigrants.)

Food stamps was also one of the few places where W lived up to some of his campaign branding:

“I don’t see it as a welfare program,” said Eric M. Bost, Mr. Bush’s first food stamp administrator. “I see it as a nutritional assistance program. You can only use it to buy food.”

And even though the program rules are not generous, Trump has made a point of being Scrooge in Chief:

To qualify, a household must have an income of 130 percent of the poverty line or less, about $28,000 for three people. Before the pandemic, the average household had a total income of just over $10,000 and received a benefit of about $239 a month.

But Mr. Trump has done all he can to shrink the program. He sought budget cuts of 30 percent. He tried to replace part of the benefit with “Harvest Boxes” of cheaper commodities. He tried to reduce eligibility and expand work rules to a much larger share of the caseload….

In December, Mr. Trump issued a rule that made it harder for states to waive work mandates in areas of high unemployment….

A second target of administration ire is a policy that lets states expand eligibility by waiving certain limits on income and assets. About 40 states do so, although the budget center found more than 99 percent of benefits go to households with net incomes below the poverty line ($21,700 for a family of three).

Critics of the policy–“broad-based categorical eligibility”–say it encourages abuse by allowing people with significant savings to collect benefits. The Trump administration is seeking to eliminate it and has predicted that 3.1 million people would lose benefits, 8 percent of the caseload.

The lack of not just compassion, but a perception of the real stakes, is breathtaking. Shortly after the Tarhir Square uprising, Nomura published an analysis of food and cooking oil costs in various countries and estimate the proportion of families that could not longer afford them. My recollection is 40% was the level at which it was a safe bet that large scale riots would erupt. On current trajectories, it won’t be that long before the U.S. gets there.