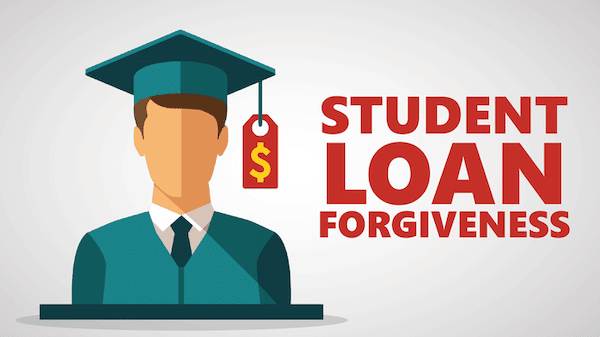 Yves here. There have been a lot of suggestions about how to improve the Biden student debt forgiveness plan. One way that would have helped the most stressed borrowers would have been to wipe out all penalty charges and interest rate premiums (often added to principal), reset the interest rate to the original level, and cut the principal balance by 50%. Given how punitive the penalties are for student loans in delinquency, the odds are high they were due either to mis-selling of the loan (overstatement of likely future income versus degree cost), student failure to complete degree (which often happens with lower-income borrowers due to “shit happens” like a family crisis), and/or work interruption.

President Joe Biden has just launched a plan to forgive a portion of federal college loan debt for millions of Americans. In a speech from the White House, he explained that the Department of Education would “forgive $10,000 in outstanding federal student loans” and that Pell Grant recipients would “have their debt reduced [by] $20,000.” Only those making less than $125,000 a year would qualify for the relief. Given that the average student debt is nearly $30,000, this certainly does not erase the burden that millions of Americans carry with them—some doing so for life, from graduation to past retirement.

There is a predictable pattern to Democratic leaders taking progressive economic measures. First, make bold promises. Then, delay keeping the promise and eventually land on a weakened version of the promise. Congratulate oneself on taking such a bold stand. And, finally, face a massive outpouring of criticism from conservative and even liberal pundits, and from some Democrats and all Republicans, that would have come no matter what version of the promise was kept. Biden’s journey on student loan forgiveness follows this depressing pattern.

When campaigning for president, Biden promised that he would “eliminate your student debt if you come from a family [making less] than $125,000 and went to a public university,” and that everyone would get “$10,000 knocked off of their student debt.”

It took Biden more than two years to land on a plan that forgives only $10,000 to $20,000 of debt, and that too, for a narrowly defined group of borrowers. During those two years, he resorted to delaying tactics such as punting responsibility back to Congress, questioning his own authority to take the step, and claiming to be reviewing his options.

House Speaker Nancy Pelosi played her part in discouraging Biden by claiming a year ago that he did not have the presidential authority to cancel student debt. She said, “The president can’t do it—so that’s not even a discussion,” and added, “Not everybody realizes that, but the president can only postpone, delay but not forgive” student loans.

Still, according to Politico, the White House regularly received so many letters from people demanding student debt relief that staff were eventually asked to stop passing them on to the president for review as he agonized over keeping even a small part of his campaign promise.

When he finally landed on his paltry plan, Biden announced it to great fanfare in a 20-minute speech that began with a meandering dive into his own family background and the story of his father’s shame at trying and failing to obtain a loan so he could fund his son’s college education. Biden reminded Americans that as a presidential candidate, he “made a commitment that we’d provide student debt relief,” but failed to mention that his original promise had extended far beyond what he took two years to deliver. As if acknowledging that his plan is hardly radical, Biden said, “Some think it’s too little,” and added, “But I believe my plan is responsible and fair.”

Cue the outrage from politicians and pundits. Senate Minority Leader Mitch McConnell (R-KY) called Biden’s plan “student loan socialism” and “a slap in the face to working Americans,” while extremist Republican Congresswoman Marjorie Taylor Greene told Newsmax, “taxpayers that never took out a student loan… shouldn’t have to pay off the great big student loan debt for some college student that piled up massive debt going to some Ivy League school.”

Former Republican lawmaker-turned-pundit Charlie Dent denounced the plan in an op-ed on CNN.com as “unfair and unwise,” while the Washington Post’s liberal commentator Catherine Rampell took a creative approach in claiming it was a “Democratic version of ‘trickle-down’ economics,” because “plenty of other, less-strapped people will enjoy a windfall, too.”

The Biden administration, to its credit, immediately began identifying Republican criticism on Twitter and tagging it with the exact amounts of Paycheck Protection Program (PPP) loans that those critics received and were forgiven.

This implies that the president was expecting the outrage. It also means that if he was going to pay a political price for such a small measure of relief, he could have, and should have, gone so much further than he did.

Biden’s plan does deserve criticism, but not because it goes too far—on the contrary, it does far too little, especially for people of color.

She’s right. A 2021 ACLU analysis pointed out that “Black families have far less wealth to draw on to pay for college,” and therefore, “Black families are more likely to borrow, to borrow more, and to have trouble in repayment.” Such analysis of the loan forgiveness plan appears to be entirely missing from the mainstream debate.

Establishment critics are also failing to point out that the reason so many Americans are burdened with so much college debt to begin with is that there has been a concerted effort over several decades by both liberal and conservative politicians to allow student debt to expand to unsustainable levels.

Chief among this was Ronald Reagan’s push to lower government spending in the 1980s. Black studies professor Devin Fergus explained how “No federal program suffered deeper cuts than student aid,” and that “these changes shifted the federal government’s focus from providing students higher education grants to providing loans.” Fergus’s analysis—so relevant to the current debate over Biden’s debt forgiveness plan—was part of an op-ed that the Washington Post published back in 2014.

Additionally, Democrats are not innocent in creating the problem. The Intercept pointed out in January 2020 how Biden “played a central role” in supporting legislation during his tenure as senator that allowed college debt to balloon. Specifically, “Biden was one of the most enthusiastic supporters of the disastrous 2005 bankruptcy bill that made it nearly impossible for borrowers to reduce their student loan debt.”

Today, with college loan debt at an all-time high, and a majority of Americans supporting the erasure of some or all student debt, the supposedly liberal party cannot even coalesce around its own president’s far-too-modest debt forgiveness program, with so-called centrists like Senator Catherine Cortez Masto of Nevada and Congressman Tim Ryan of Ohio claiming it goes too far.

Those who are invested in the upward mobility of wealth will always express outrage against economic justice. Responding to his critics, the president tweeted, “I will never apologize for helping America’s middle class—especially not to the same folks who voted for a $2 trillion tax cut for the wealthy and giant corporations that racked up the deficit.”

Biden could have doubled or tripled the extent of his debt forgiveness plan and made the exact same retort.