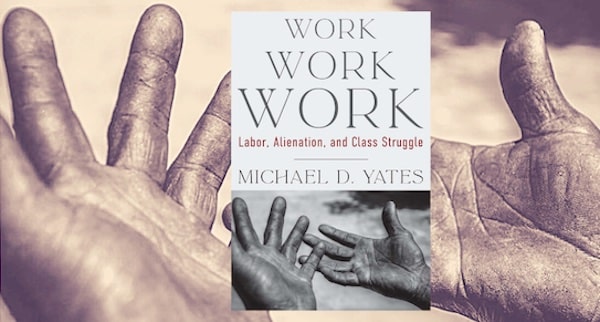 The word “work” has been associated historically with “compulsion, torment, affliction, and persecution.” Why is this? The answer lies in our economic system.

The driving force of capitalism is capital accumulation. Every business seeks to make maximum profits and then grow as rapidly and as large as possible. The source of this accumulation is our daily labor; without workers, there are no profits and there is no growth.

From the employer’s point of view, our labor power is simply a commodity, no different than the inanimate buildings, machines, tools, and raw materials purchased by businesses. Given our circumstances, we must sell this commodity to survive. But after we do, the employer has no guarantee that our capacity to toil will be converted into actual work effort.

Workers have always resisted their commodity status, finding ways to interfere with the smooth functioning of the labor process, such as riots, strikes, picketing, and boycotts. This has forced managements to devise ways to control us at work, so that we cannot interfere with the making of money. That’s the essence of management: control.

A wide range of “control mechanisms” have been put in place by employers. Beginning in the late 18th century, workers were herded into factories, where they could be disciplined by the factory whistle and observed as they labored.

This watching—which today has reached unprecedented degrees, as in Amazon warehouses—gave rise to the splitting up of craft tasks into discrete and much cheaper details. Those without craft knowledge, initially women and children (often orphans), could be hired cheaply to do repetitive subtasks. This enhanced control by making workers interchangeable parts, greatly raising the number of people who could perform any particular job and making workers fearful of being replaced.

Soon some of the details were mechanized. Then a system of connected machines was invented, the assembly line, which made workers subservient to the relentless speed of the line.

The patron saint of managerial control and of the industrial engineers who discovered ever new methods of it was Frederick Taylor. He systematized what had gone before him in what came to be known as “scientific management.” The conception of work would be the sole duty of management, while workers would do their jobs according to a strict machine-like plan.

Since Taylor, employers have made many refinements and innovations in control. Human Resources departments were created, to sanitize the driven nature of modern work. Toyota brought us “Lean Production,” with its systematic hiring, team production, cross-training, just-in-time inventory, and the insidious kaizen or “continuous improvement.”

No matter what work a person does—white collar, blue collar, gig labor, you name it—control is the key to management success.

WORK COULD BE DIFFERENT

Unions and other forms of struggle have ameliorated managerial control. For example, there are laws and collective bargaining provisions limiting hours and protecting health and safety on the job. But control has not been eliminated, and for many workers, it has widened and deepened.

The result is that work alienates us and damages our bodies and minds. In June a UPS driver collapsed and died from heatstroke on a hot day in an overheated truck. Death, sickness, and emotional distress are all too common. We suffer all this so a few can be rich. And when we are worn out, we are discarded, replaced by others younger and stronger.

This is true everywhere in the world, as the International Labor Organization’s World Employment and Social Outlook report makes starkly clear. Work is a painful experience. Just ask the 1.5 billion workers worldwide in “vulnerable” employment, eking out a living scavenging garbage dumps, sewing clothes on consignment, selling on the streets, searching for scrap metal on gigantic slag heaps, pulling rickshaws. Or the 160 million child laborers, some younger than 10 working in mines.

On top of that, our jobs are often producing useless or harmful products. If we continue to work as we have been, how will we solve the environmental catastrophes now upon us?

It will not be possible to build a better world unless work is revolutionized—so that it becomes a socially useful part of life, allowing us to fully realize our human potential, as it was for most of human existence. It is time for a direct assault on capitalist control.

Labor must begin to think radically about work—beginning with a sound understanding of the nature of work today and a vision of how work could be different. Then we begin with changes such as getting rid of management rights clauses and reinstating a general right to strike. Stewards trained to understand all of the controls management might employ could help their co-workers to prepare, recognize employer propaganda, and develop campaigns to combat them.

Unions and all labor organizations and political formations should engage in a massive educational campaign—aimed first at union members, who then can spread the word to the unorganized.

Such education should emphasize the history and nature of the relationship between the employing and the working class, and how control and conflict are central to this relationship. I taught workers from around the United States, from scores of occupations, and it was a rare student who wasn’t keen to know these things. “You are opening eyes in this class,” a man once told me in a class of autoworkers in Pittsburgh.

Education needs to instill in people that, in concert with others, they have the capacity to control their own work lives. In the past, labor organizations have opened schools for workers, built and run banks, built and operated hospitals, constructed housing developments and recreation facilities, and started restaurants. Workers have organized cooperatives.

In Brazil, the Landless Workers Movement has taken over unused land, struggled to control it, and begun to produce food and other products on it. They say, “Occupy, Resist, Produce.” In Jackson, Mississippi, working people have done something similar, producing food and some industrial goods. Around Detroit, abandoned land has become farms, along with food distribution centers and a program to show people how to cook.

There is no reason why, alongside workplace and political agitation, labor organizations with significant monetary resources could not buy land and property to retrofit buildings in an environmentally sound way—training workers to do the necessary jobs as groups who control their own labors, constructing homes for working-class people. Workers, with community support, could take over closed businesses and do the same thing.

Some of these efforts might seem utopian. Yet today workers are on the rise, organizing, learning, and thoroughly disgusted and angry about their work lives. And we are facing grave crises: the rise of the far right and impending environmental collapse. Something has to change. Why not do what we can immediately and shoot for the moon at the same time?