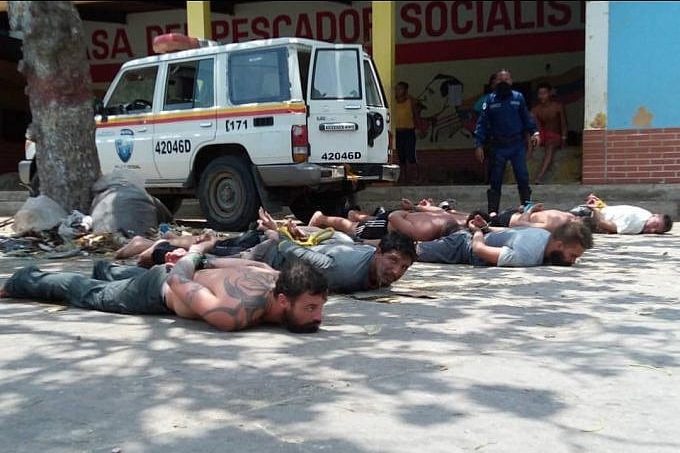 Paramilitaries financed by the U.S. and Colombian governments are captured by conventional security forces and members of the Bolivarian Militia. Photo: Twiter.

When an attempted invasion of Venezuela launched from the shores of Colombia was foiled on May 3, after armed commandos were intercepted at Venezuela’s coastline of La Guira, it seemed undeniable that the heavily armed men, possessing satellite phones and uniforms with the U.S. flag emblazoned on them, had been paid to take part in a coup attempt to overthrow the Venezuelan government (People’s Dispatch, 5/6/20).

In recent reports regarding the Bay of Pigs–style invasion, however, the term “mercenary” was accompanied by scare quotes, as if these men could only be seen that way from the perspective of an Official U.S. EnemyTM (whose perspective is always illegitimate in the eyes of corporate media). 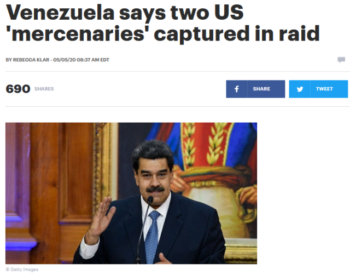 The Hill (5/5/20) is not sure whether an armed force invading Venezuela, led by the head of the “Florida-based security company called Silvercorp USA,” can be described as “mercenaries.”

Fox News’ “Venezuela’s Maduro Says Two U.S. ‘Mercenaries’ Were Captured in Failed Raid Attempt” (5/5/20) described Maduro as the “embattled leader of Venezuela,” who said that authorities in Caracas had “captured 13 ‘terrorists’—including two U.S. citizens—in a failed invasion attempt that he said was no doubt orchestrated by the Trump administration.”

The Hill’s “Venezuela Says Two U.S. ‘Mercenaries’ Captured in Raid” (5/5/20) reported that “Venezuelan President Nicolás Maduro on Monday said that two U.S. citizens have been detained as part of a group of ‘mercenaries’ authorities captured in a raid,” and added that

Maduro said during a state television address that 13 “terrorists” were arrested by Venezuelan authorities for allegedly being involved in a plot Maduro claimed was coordinated with Washington to oust him from power.

The New York Times’ report (5/5/20) actually mentioned that the two Americans captured, Airan Berry and Luke Denman—who had their names and birthdays, from their ID cards and passports, recited aloud in a state address—were employed by “Silvercorp, a Florida-based security company whose owner has claimed responsibility for the failed incursion on Sunday,” which appears to confirm the Venezuelan government’s account. The Times cited a video posted on social media by Silvercorp owner Jordan Goudreau, a retired Green Beret, and retired Venezuelan army captain Javier Nieto, claiming that “Operation Gideon” had been “successfully launched ‘deep into the heart of Caracas.’ They added that other armed cells had been activated throughout the country.” 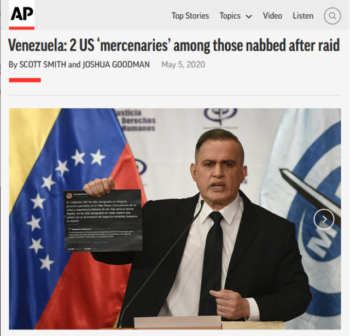 AP (5/5/20) described the American who led the attempt to overthrow Venezuela’s government as “a three-time Bronze Star U.S. combat veteran,” whereas President Nicolás Maduro describing the foiling of the effort was “self-aggrandizing.”

Before the coup attempt, the Associated Press (5/1/20) published a report describing these men as “aspiring freedom fighters,” scolding the soldiers-for-hire for “skimpy planning” and “poor training,” leaving them unprepared to execute their regime change schemes. The article seemed to take more issue with the fact that it was an unrealistic and poorly planned effort, rather than the fact that trying to overthrow democratically elected governments in Latin America is immoral and illegal.

Subsequent articles (New York, 5/5/20, 5/5/20; Vice, 5/6/20) mocked the botched coup plotters for announcing their plans via Twitter. Perhaps U.S. journalists should be more focused on condemning and investigating these coup attempts, rather than giving advice on how to pull one off better?

The AP’s later report (5/5/20) on the failed invasion, “Venezuela: Two U.S. ‘Mercenaries’ Among Those Nabbed After Raid,” which described how Venezuelan authorities “arrested two U.S. citizens among a group of ‘mercenaries’ on Monday,” went on to omit the role of US’s genocidal sanctions devastating Venezuela’s economy by pinning the blame on Maduro, absurdly painting him as an all-powerful dictator, despite the opposition controlling the Venezuelan legislature (Venezuelanalysis, 1/16/20):

Venezuela has been in a deepening political and economic crisis under Maduro’s rule. Crumbling public services such as running water, electricity and medical care have driven nearly 5 million to migrate. But Maduro still controls all levers of power despite a US-led campaign to oust him.

The Wall Street Journal’s report (5/6/20) not only put terms like “mercenary incursion” in scare quotes, but also lionized these mercenaries by portraying them as unlikely heroes, out to “arrest Venezuela’s authoritarian government and free political prisoners.” Whereas BBC’s headline “Venezuela Detains Two U.S. Citizens Over Speedboat Incursion” (5/5/20) seemed better suited to describing rich bros wandering into the wrong area, rather than soldiers of fortune caught trying to overthrow a government.

The Washington Post (5/4/20) reported that Maduro claimed that his government “had captured two American ‘mercenaries’ Monday in a murky operation allegedly intended to infiltrate Venezuela, incite rebellion and apprehend its leaders.” But even as it cast doubt on the idea that a mercenary force had tried to overthrow Venezuela’s government, the Post seemingly tried to justify such a coup effort by reiterating bogus and hypocritical U.S. accusations against Maduro for being involved with narcoterrorism. The Post inserted—without any critical scrutiny—that “US officials” have “indicted Maduro on narcoterrorism charges, offered a $15 million bounty for information leading to his capture or conviction, and imposed severe sanctions on his government.”

The Grayzone (8/6/19, 3/27/20) reported how Maduro has survived previous assassination attempts, and documented US-backed opposition figurehead Juan Guaidó’s ties to the infamous Los Rastrojos drug cartel. The news site noted that only 7% of total drug movement in South America comes through Venezuela, with the U.S. being the biggest consumer of cocaine, while US-allied Colombia is the biggest producer.

Pino Arlacchi, former executive director of the UN’s Office for Drug Control and Prevention, claimed that he never came across evidence of Venezuela’s involvement in the drug trade, and observed that Colombia and the U.S. have driven drug production and consumption in his 40 years of anti-narcotic work. Honduras’ US-backed President Juan Orlando Hernández has been linked to drug trafficking in U.S. courts and brought about a resurgence of death squads, yet the U.S. has put no Mafia-style bounty on his head.

That the U.S. government and corporate media recite these dubious talking points suggest they’re more interested in sabotaging the Bolivarian Revolution and undermining domestic progressive movements (FAIR.org, 2/8/19, 2/20/19) than in any sincere effort to combat narcoterrorism, as the Venezuelan government has a strikingly different political agenda than the right-wing Colombian and Honduran governments aligned with the Trump administration. 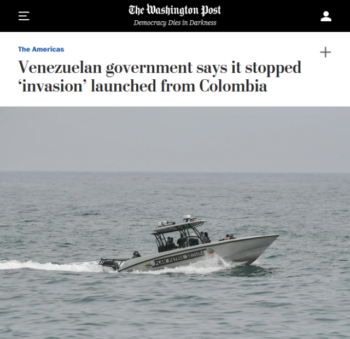 The Washington Post (5/3/20) isn’t even sure if armed forces coming into your country to overthrow the government can really be called an “invasion.”

The Washington Post’s earlier “Venezuelan Government Says It Stopped ‘Invasion’ Launched From Colombia” (5/3/20) couldn’t even acknowledge that it was an invasion attempt, putting scare quotes around the term when it wrote, “The government of President Nicolás Maduro said it had thwarted an early morning ‘invasion’ off its Caribbean coast on Sunday.” The Post did this despite explicitly mentioning that Operation Gideon was “an effort to capture senior members of Maduro’s government,” and citing three anti-Maduro figures familiar with Sunday’s coup attempt, including “opposition lawmaker Hernán Alemán,” who claimed that the captured men hailed from Colombian training camps filled with Venezuelan military defectors (who were urged to defect by the US) and sought out by former Venezuelan army general-turned-defector Cliver Alcalá.

According to Alemán, the initial plan to invade Venezuela at La Guaira (where the mercenaries were captured) had to be adjusted after weapons shipments were seized by Colombian authorities in March. Omitted by the Post’s report (and corporate media coverage more generally) were earlier reports (Grayzone, 3/27/20; People’s Dispatch, 3/27/20) of Alcalá confirming the Venezuelan government’s account of the March 24 weapons seizure in Colombia being part of regime-change efforts, when he gave interviews and posted on social media revealing plans concocted with U.S. government advisers and Guaidó to assassinate Maduro. Alcalá’s testimony seems to be corroborated by the fact that the weapons in March were headed towards Robert Colina Ibarra, alias “Pantera,” who was one of the men killed in Sunday’s coup attempt (Telesur, 3/26/20, 5/3/20).

Although corporate media reports of the coup attempt frequently cited denials by U.S. officials and Guaidó of any involvement with the La Guaira invasion, testimonies by Silvercorp’s Jordan Goudreau and Luke Denman—as well as photos of Guaidó’s signature on a general services contract, offering payment for their services—seem to contradict at least Guaidó’s claims.

It is also unclear how the US-backed Guaidó could hope to come up with the minimum of $212.9 million agreed upon in Silvercorp’s contract unless he anticipated the financial support of the U.S. (which bankrolls him to a generous degree)—though the fact that he ultimately reneged on his financial promises to Silvercorp raises the possibility that his Washington paymasters might have been unimpressed with the coup plan’s prospects.

At Grayzone (5/10/20), FAIR contributor Alan MacLeod reported that Silvercorp’s contract also authorized the killing of anyone the mercenaries considered to be “armed and violent colectivos.” The term colectivo is a dehumanizing catch-all term used by certain sectors of the Venezuelan elites to apply to any working-class person, and appears to instruct these mercenaries to convert into death squads under Guaidó’s command after fulfilling their mission, in order to kill opposition to a successful coup. This bolsters the Maduro government’s case for regarding the mercenaries as potential terrorists as well.

While there is no definitive evidence that the U.S. was behind the coup attempt, the Trump administration has never made its consideration of a “military option” to enact regime change in Venezuela a secret. And the March weapons seizures coincided with the administration’s explicit declarations of a “maximum-pressure March,” and the announcement of a “Monroe Doctrine 2.0,” as the U.S. stepped up its illegal, genocidal sanctions on Venezuela, and military buildup in Latin America under the pretext of fighting foreign threats (Grayzone, 3/17/20, 3/30/20; FAIR.org, 3/25/20).

Journalists should not be too quick to discount the possibility of U.S. involvement, because the U.S. has a history of exploiting a loophole in international law banning the use of mercenaries that allows the use of “private military security contractors” as soldiers-for-hire under a different name. These serve to provide plausible deniability for war crimes and evade accountability. The UN has noted that the increasing use of contractors in U.S. wars clearly amounts to mercenary activity by another name. It’s hard to believe that U.S. officials didn’t anticipate that mercenaries would to attempt to kidnap or assassinate Venezuelan government officials, as a U.S. hit list incentivizes people to collect millions in bounty money. Recent reports indicate that Silvercorp was trying to obtain the Trump administration’s bounty.

FAIR (5/1/19, 11/26/19) has documented how corporate media have been advocating for a coup in Venezuela on behalf of the U.S. government, and whatever the case may be regarding official U.S. involvement, it’s clear that the men behind the La Guaira invasion aren’t described as mercenaries because the U.S. government and media alike favor regime change in Venezuela.