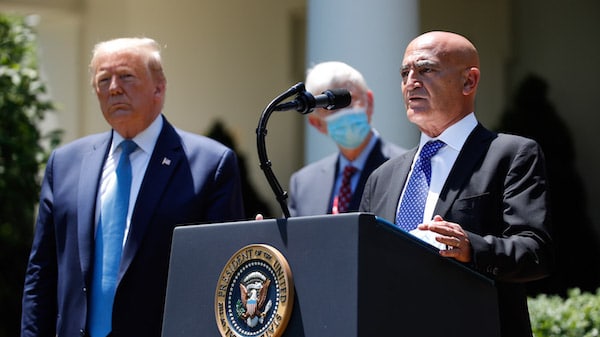 President Donald Trump, left, listens as Moncef Slaoui, a former GlaxoSmithKline executive, speaks about the coronavirus in the Rose Garden of the White House, Friday, May 15, 2020, in Washington. (AP Photo/Alex Brandon)

former Big Pharma executive and a four-star General have just been appointed by President Trump to lead a “Manhattan project-style effort to develop a vaccine for the novel coronavirus.” The effort, called Operation Warp Speed, has set a goal to create 300 million doses of a non-existent vaccine by January.

Moncef Slaoui, who used to run research and development for the world’s largest vaccine company, GlaxoSmithKline (GSK), oversaw the development of an Ebola vaccine in tandem with the American National Institutes of Health (NIH) and a biotech firm the company had acquired two years earlier, that was distributed in the West African nation of Liberia in 2015. Slaoui joined the board of directors of the Human Vaccines Project in 2018; a public-private partnership that intends to “accelerate the development of vaccines and immunotherapies against major global diseases” and counts with the participation of the biggest pharmaceutical companies in the world, including Sanofi Pasteur, Johnson & Johnson, Pfizer and, of course, GSK.

Joining him will be U.S. Army General Gustave F. Perna, commanding general of the U.S. Army Materiel Command (AMC)–the primary provider of materiel to the United States Army–since 2016. As such, Perna has been in charge of logistical management for the Department of Defense’s (DoD) co-production agreements of American weapons systems with foreign countries, in addition to the approximately 149 locations worldwide and over 70,000 military and civilian employees who carry out the command’s motto:

If a Soldier shoots it, drives it, flies it, wears it, communicates with it, or eats it–AMC provides it.

The announcement comes two days after a press release by the Department of Defense revealed that a $138 million contract was awarded to ApiJect Systems America for the production of millions of prefilled syringes as part of projects “Jumpstart” and “RAPID” (Rapid Aseptic Packaging of Injectable Drugs). The DoD claims that the contract will “dramatically expand U.S. production capability” of injectable vaccines by October of this year. Project Jumpstart, according to the press release, was coordinated with their Joint Acquisition Task Force and HHS’s Office of the Assistant Secretary for Preparedness and Response (ASPR), led by Dr. Robert Kadlec, who has recently been the subject of intense scrutiny over some highly questionable ties to Big Pharma and curious past.

A tug of war for the SNS

The Trump administration’s ostensibly independent program to develop and deploy a vaccine against COVID-19 had been in the hands of his son-in-law, Jared Kushner and Trump advisor, Peter Navarro, though Bloomberg reported in April that HHS Secretary Alex Azar had been tasked by Trump to speed up the development of a vaccine and had been meeting for at least a month prior with White House officials.

The rollout is occurring as Congressional attention focuses on irregularities surrounding the supply of ventilators in the Strategic National Stockpile (SNS), a thousand of which were shipped to South Africa just the other day. In addition, yesterday’s so-called “whistleblower” testimony by ousted Biomedical Advanced Research and Development Authority (BARDA) chief, Rick Bright, is also spotlighting the issues at the SNS, which is controlled by HHS’ ASPR, Robert Kadlec. BARDA is an office within ASPR that is tasked with sourcing pharmaceutical and medical supplies for the Strategic National Stockpile.

More controversy surrounding the Strategic National Stockpile erupted after Kushner made remarks about the role the SNS plays in emergency deployment situations. Kushner was harshly criticized for implying that the SNS belonged to the federal government and served only as a back-up for states, who should be accumulating their own stockpiles. Despite being contradicted by well-established guidelines, which make clear that the SNS is in place to shore up any deficiencies in a public health emergency, the White House deliberately changed the language on its website to back up Kushner’s erroneous assertions about the stockpile.

What seems clear, however, is that Kushner himself was not the mastermind behind the sudden policy tweak. Speaking on the condition of anonymity, a spokesperson for the Office of the ASPR told CNN they had been using such language “for weeks now.” Considering the history of how the SNS came to be in the hands of the ASPR, this latest tweak to how the SNS is managed might just be a new wrinkle in an old plan to mass inoculate the population of the United States.

Yesterday, President Donald Trump revealed that a decision had been made to mobilize the U.S. military to deliver mass vaccinations across the country. The “massive job,” however, still has no discernable vaccine yet to inject into the American population “at the end of the year.” Trump’s group of medical advisors, including NIAID director, Anthony Fauci, are skeptical that any such vaccine can be developed sooner than 12 to 18 months.

“Duplication only leads to infighting and slowing people down,” said former U.S. ASPR, Nicole Lurie regarding the creation of Operation Warp Speed. She decried the spirit of marketplace competition, stating that the world “should be engaged in this competition against the virus, not against one another.”

With over 110 COVID-19 vaccines in development–only eight of which have entered human trials–the race to be the vaccine chosen for deployment by the ASPR in the forthcoming potentially compulsory vaccination of more than 300 million people has many people seeing green.